The Bank of Japan decided Monday to double its purchasing of exchange-traded fund securities to 12 trillion yen ($112 billion) a year as part of the first additional easing measures in three and a half years to bolster the economy and financial markets rattled by the spread of the new coronavirus.

Following the Federal Reserve's action overnight to cut U.S. interest rates to zero percent, the BOJ also said it will boost its target of commercial paper and corporate bond purchases by 2 trillion yen until the end of September.

To facilitate corporate finance, the central bank will provide loans against corporate debt of about 8 trillion yen as of the end of February as collateral at the interest rate of zero percent with maturity of up to one year. 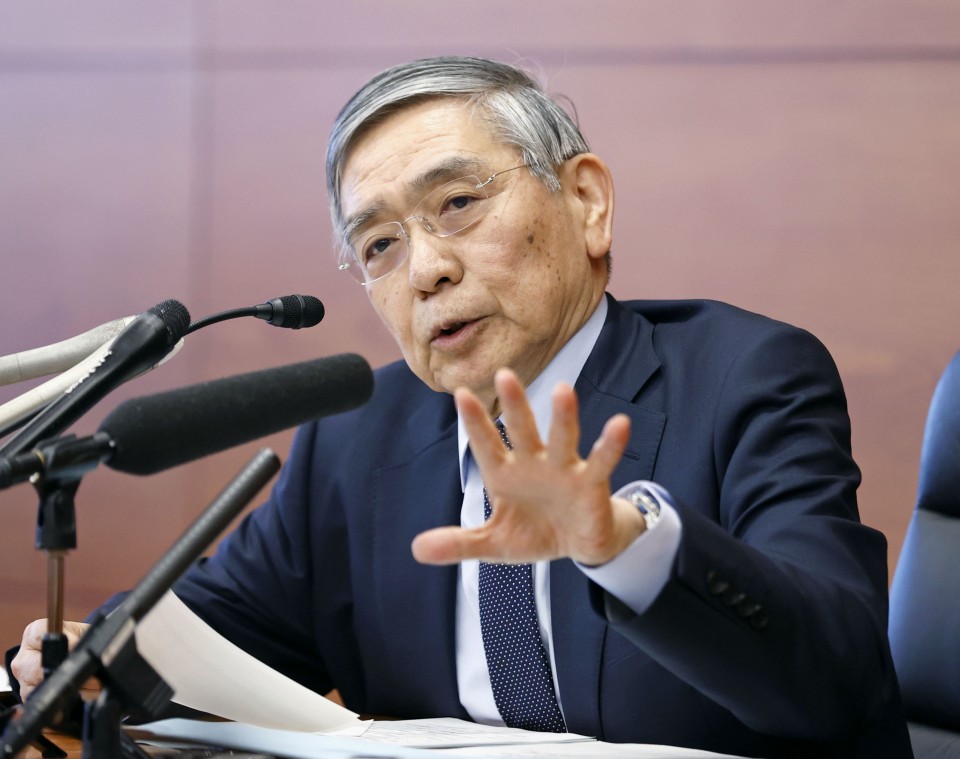 -- doubled its target for annual purchases of exchange-traded funds to 12 trillion yen to support Tokyo stocks.

-- will cooperate with other major central banks to supply dollar funds at lower costs and for longer maturities.

-- downgraded its assessment of Japan's economy, warning it "has been weak recently" due mainly to the outbreak.

Kuroda said the economic impact of the China-originated, pneumonia-causing virus is likely to "continue for some time," and that he "will not hesitate to take additional easing measures if necessary."

"The spread of the coronavirus infection is raising uncertainty in the global economy, and volatile moves are continuously seen in domestic and overseas financial and capital markets," he said.

However, the BOJ refrained from further cutting short-term interest rates into negative territory -- currently set at minus 0.1 percent -- amid criticism such monetary policy eats into commercial banks' profits.

Kuroda said the central bank can deepen the negative interest rates if needed, but that now is not the time to take such action.

The BOJ moved forward what was originally scheduled to be a two-day gathering starting Wednesday, hours after the Federal Reserve's decision to cut its target range for the federal funds rate by 1.00 percentage point to 0.00 to 0.25 percent, the lowest level since late 2015.

Six central banks, including the BOJ, the Fed and the European Central Bank, also said they will take coordinated action to enhance the provision of U.S. dollar liquidity.

Earlier Monday, Prime Minister Shinzo Abe said he and his counterparts from the Group of Seven industrialized counties will hold an emergency videoconference from 11 p.m. Japan time to discuss their response to the global spread of the coronavirus.

The additional easing measures did not impress markets, with the benchmark Nikkei stock index ending down 429.01 points, or 2.46 percent, from Friday at 17,002.04, the lowest level since November 2016.

In its outlook for the economy and price developments, the BOJ downgraded its basic economic view, saying, "Japan's economic activity is likely to remain weak for the time being, mainly affected by the outbreak of COVID-19."

In January, the BOJ maintained its view that "Japan's economy is likely to continue on an expanding trend...through fiscal 2021."

It also said in the statement that the consumer price index is "likely to be somewhat weak for the time being," citing declining crude oil prices.

Recent sluggish domestic economic data have increased pressure on the central bank to take additional steps to stabilize the economy and financial markets.

The spread of the coronavirus, which causes COVID-19, has weighed on a wide range of economic activities in the tourism, retail and manufacturing sectors in Japan.

The number of domestic infections has topped 1,500, including about 700 from the Diamond Princess cruise ship that was quarantined near Tokyo.

Japan's economy shrank an annualized real 7.1 percent in the October to December quarter, its sharpest fall in more than five years, due to a sales tax hike and a devastating typhoon last year.

Many analysts are concerned the economy may post negative growth for the second straight quarter in the January to March period due to the virus outbreak.