Nearly all prefectures began shutting schools Monday in a bid to prevent the further spread of the coronavirus in Japan, four days after Prime Minister Shinzo Abe surprised many with a request for schools to be closed countrywide until early April.

As confusion spread among many local authorities across Japan, some schools held their final classes or left facilities open for children who cannot stay home alone while their parents are at work.

More than 970 infections have been confirmed in Japan, with Ehime Prefecture reporting its first case Monday -- a woman in her 40s. The tally includes more than 700 people who were aboard the Diamond Princess, a cruise ship that was quarantined near Tokyo.

According to the Ehime prefectural government, the woman, who works for a local bank, is not displaying symptoms such as fever or coughing. She visited a music venue in Osaka in mid-February, where a few others had tested positive for the virus.

Shimane in western Japan, one of the prefectures not to have any reported cases of the virus, is the only prefecture to say it will not yet close schools.

Around 600 students headed to Koshibara Elementary School in the Shimane prefectural capital Matsue as usual. A 35-year-old mother of two who dropped her children off voiced mixed feelings.

"I'm grateful that the school is open, but I'm also worried that it may become the source of an infection," she said. 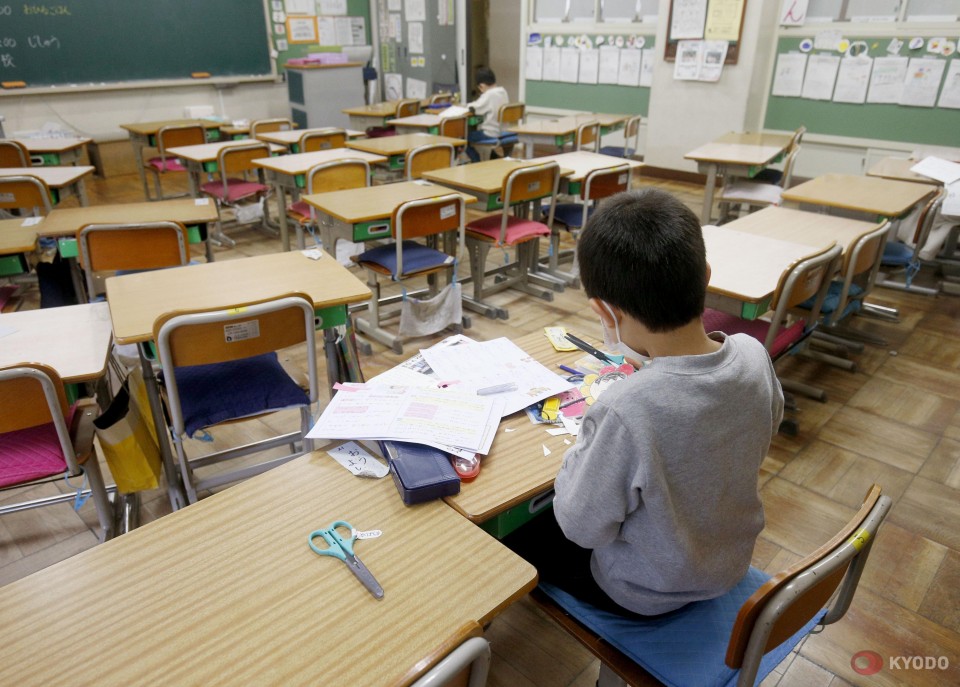 The city of Saitama, north of Tokyo, closed all its elementary schools Monday but said they would be open for children who cannot stay at home alone.

Of its 945 students, the city's Tokiwa Elementary School accepted 72 whose parents were unable to work from home. They kept busy with calligraphy lessons or by doing arts and crafts.

"I want to see my classmates," said a seven-year-old student who was making decorations for a graduation ceremony.

The school's principal, Kimio Mishima, said, "Schools were closed quite suddenly, but we would like to think of the children first and provide a place for them (to go)."

Suzaku No. 4 Elementary School in Kyoto, western Japan, said it plans to close from Thursday. "We're going to get ready in three days and provide educational and general guidance during the closure," its principal, Tomohiro Hirano, said. 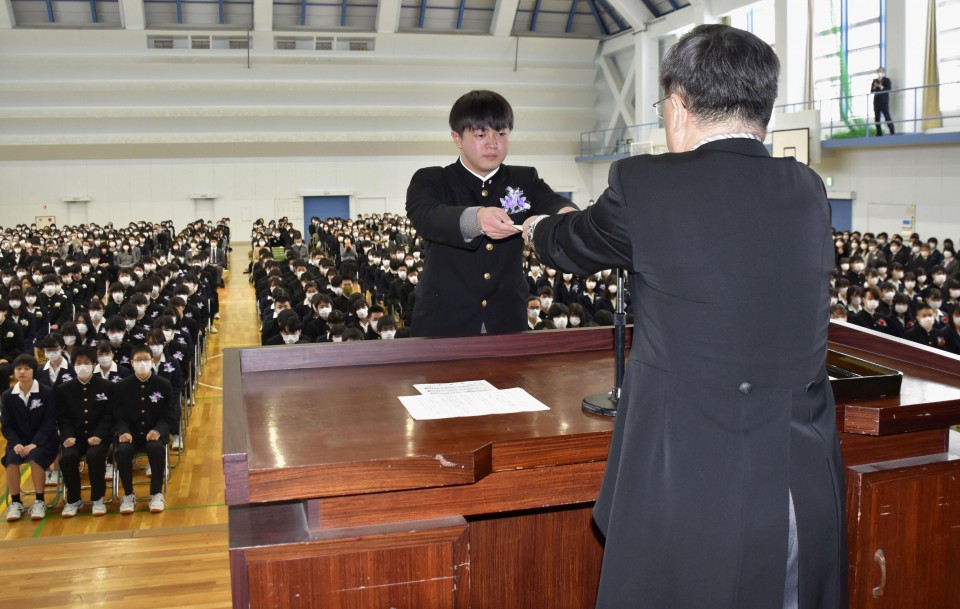 Meanwhile, one elementary school in Otawara, Tochigi Prefecture, eastern Japan, will hold only morning classes through to the end of the school year in late March. Teachers there on Monday taught students how to wash their hands properly and how to use alcohol to disinfect surfaces.

Koyo High School in Nagoya, central Japan, held a short graduation ceremony which limited the number of attendees to graduates, guardians and teachers, and did not include current students.

The city initially canceled graduation ceremonies in line with the prime minister's announcement, but later said they could go on as long as the schools took measures, such as shortening the event.

"Some schools weren't able to hold them, so I'm relieved that it's over," graduating student Nanami Yogo, 18, said.

Some schools will close from Tuesday or later.

Hokkaido, which has the largest number of coronavirus cases in the country, on Monday confirmed another five people between their 40s and 60s have tested positive, bringing the total to 77.

Young people with a low risk of developing a serious condition are likely one of the causes of the rapid virus spread in Hokkaido, according to a government panel of experts.

Those with mild symptoms may be infecting others without realizing it, they said at a meeting Monday. But as long as people limit person-to-person contact whenever feasible, "it is possible to swiftly return things to normal," they said.

Abe announced the school closure plan last Thursday, calling for them to remain shut through the end of the spring break in early April when the new school year starts in Japan. The education ministry subsequently issued the request to local education boards.

The prime minister said parents who need to take time off and look after their children until schools start the new academic year will receive financial support.

On Monday, the health ministry said it will provide a subsidy for firms that created their own paid leave systems over the outbreak and made parents with children attending elementary and special schools or children suspected of being infected with the new coronavirus take leave.

By paying up to 8,330 yen ($77) a day per worker for paid leave between Feb. 27 and March 31, the ministry hopes to help companies compensate workers for income losses.

The Cabinet Office also decided that the subsidy payment for working parents using babysitters will be raised from a monthly maximum of 52,800 yen to 264,000 yen for the whole of March.

With the service often costing a few thousand yen per hour, the move was made in consideration of parents with young children who will have to rely on sitters for the whole day.

The town of Kimotsuki, Kagoshima Prefecture, said it would extend a subsidy of 3,500 yen per child of elementary school age in a bid to ease the financial strain on parents who will have to provide lunches and send children to be supervised elsewhere.

There are 666 registered elementary school students in the town, with the subsidized amount set to total 2.3 million yen, it said.

Furthermore, the criteria for employment subsidies have been eased for those that have been affected by the pneumonia-causing virus to include nonregular employees as well.

The supermarkets will open at 10 a.m., around 30 minutes to an hour later than normal, while some will also close one to two hours earlier, effective until March 31.