South Korea confirmed another 467 cases of coronavirus infection on Thursday, bringing the tally to over 6,000.

According to the earlier report from the health authorities, 4,326 cases occurred in Daegu, the worst-hit city in the country's southeast, with a shortage in hospital beds there becoming increasingly dire.

The death toll from the pneumonia-causing virus has risen to 37, up four from Wednesday, according to a Health and Welfare Ministry.

Daegu, the country's fourth-largest city, is home to a branch of a minor Christian sect where mass transmissions are believed to have occurred among group members. 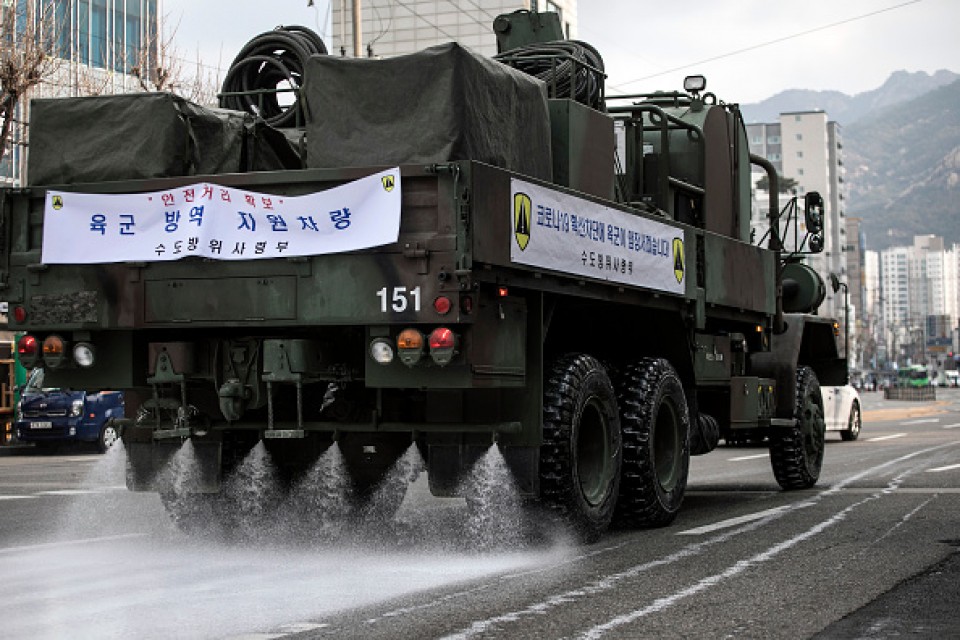 (A decontamination truck disinfects the Eunyeong district against the new coronavirus in Seoul on March 4, 2020.)[Getty/Kyodo]

Over 2,000 people with the virus are waiting to be admitted to hospitals, according to local media. Of those who have died, five did so while in self-quarantine.

The government has turned various facilities into temporary treatment centers to care for those with symptoms, but the spread of the virus has outpaced such efforts.

Also amid the surging demand for face masks, the government decided to ban exports of domestically produced ones starting Friday. It earlier had set a ceiling of 10 percent of daily output for exports.

Infections are also increasing in other metropolitan areas, with the number of cases in the capital Seoul reaching 103.

U.S. Forces Korea said Thursday that two dependents of service members stationed in Daegu have tested positive for the pneumonia-causing virus, making them the fifth and sixth people linked to U.S. military members based in South Korea to be confirmed as infected.

According to health authorities, 88 patients have been released after making a full recovery, while more than 21,000 people are still being tested.