While the coronavirus pandemic has created friction between some countries, it appears to have brought out mutual expressions of goodwill between China and Japan, two historical rivals with a sometimes rocky relationship.

After the deadly infectious disease first broke out in China late last year, Japanese cities and private organizations were among the first to respond by sending thousands of masks and emergency supplies to the country.

Just days after Wuhan, the original epicenter of the pneumonia-causing virus, was put on lockdown on Jan. 23, Oita, its sister city in southwestern Japan, donated 30,000 surgical masks.

"Since the outbreak of the epidemic, the Japanese government and people have expressed sympathy, understanding and support to us," Chinese Foreign Ministry Spokesperson Hua Chunying said during an online press briefing on Feb 4. 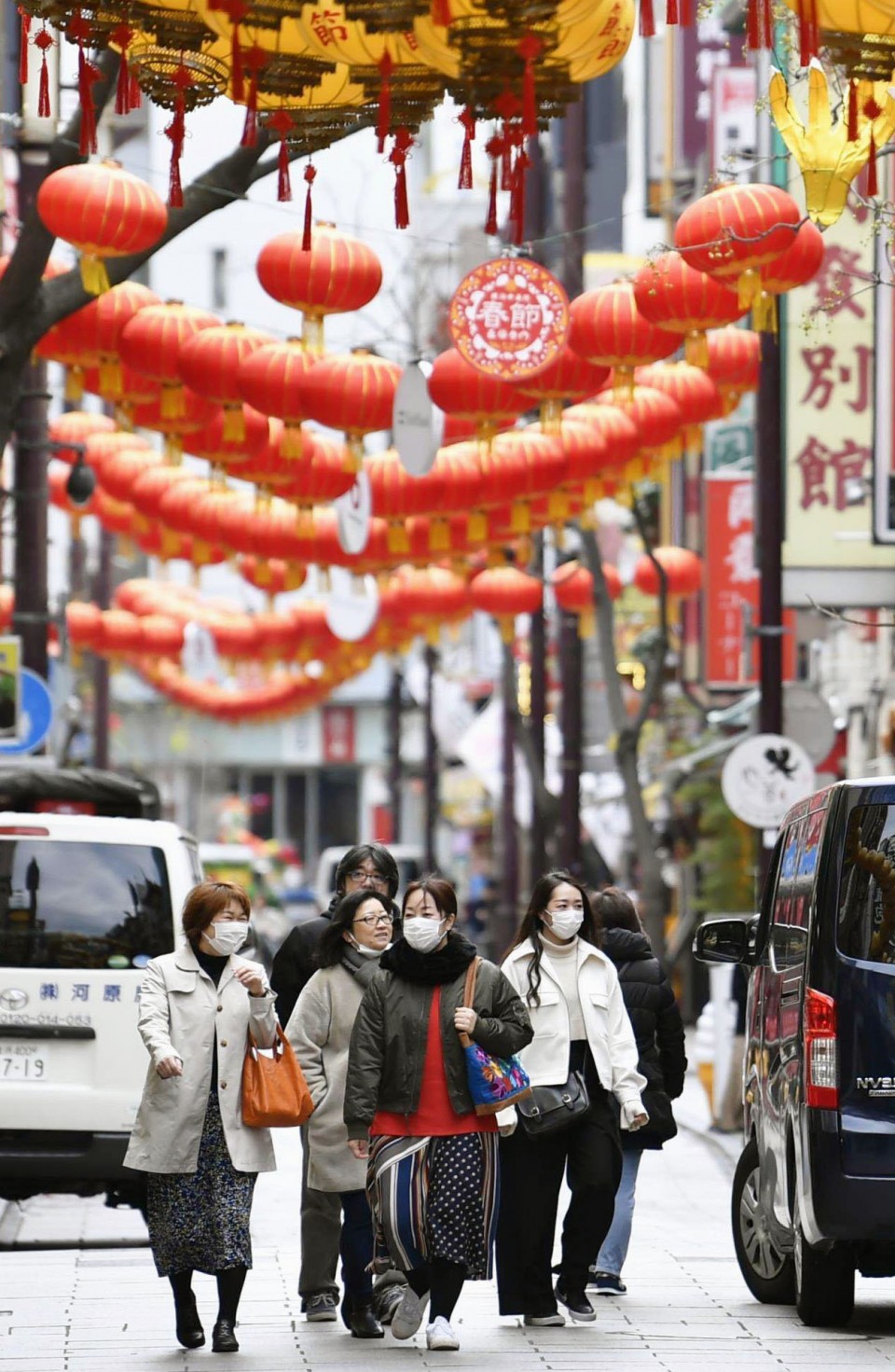 (People wear face masks in Chinatown in Yokohama, near Tokyo.)

She praised Japan's donations of masks and protective gear, messages of encouragement put up at drugstores, and the lighting up of Tokyo Skytree, the Japanese capital's tallest building, in red to express solidarity with China.

"What the virus has done is cruel and will not last. What the people have done is touching and will be remembered forever," Hua said.

Meanwhile, in stark contrast, the already tense relationship between China and the United States has grown even more testy as each side blames the other for the emergence of the pathogen.

As of Feb. 7, governments, organizations and individuals in Japan had donated over 6.3 million masks, 1 million pairs of gloves, 179,000 sets of protective gear, 78,000 pairs of goggles, 16,000 thermometers and 1.15 tons of disinfectant, among other emergency supplies, according to the Chinese Embassy in Japan.

But it is Chinese social media that has been most abuzz about Japan's support.

A photo, showing an ancient proverb printed on boxes of supplies donated to Wuhan by the Japan office of a Chinese-language proficiency test organization, quickly went viral after capturing the attention of netizens.

The verse, originally part of a poem symbolizing the long-standing friendship between Japan and China, read, "Though we have different mountains and rivers, we share one moon under the same sky."

First posted on Jan. 31 on the Chinese social media platform Weibo, the photo has been shared by over 66,000 people and had 335,000 likes as of March 21. It has also been making the rounds on the social messaging app WeChat and been reported on by many local news sites.

"We need to cherish this type of friendship that provides help when we most need it," a Weibo user posted in the comments. "I feel moved," another said.

China's state-run Xinhua News Agency also praised the actions, saying in a story released earlier this month that it "conveyed the heartfelt support of the Japanese people."

Another post, made by the Embassy of Japan in China on Feb. 17 on its official Weibo account, announced that a fifth government-chartered flight sent to evacuate Japanese citizens in Wuhan and their families would also carry aid supplies.

Donated by the Japanese government and the cities of Tokyo and Oita, as well as three Japanese firms including Ryohin Keikaku Co., the operator of Muji-brand goods, the boxes included messages of encouragement such as "Hang in there Wuhan!" and an eight-character stanza from an ancient poem meaning "Together we stand, my armor's thine."

The post had received around 47,000 likes and over 4,000 comments as of March 21, which included "Leave some for yourself, don't send any more" with a crying emoji, and "I'm starting to worry about you guys instead since you still have to host the Olympics."

But since March, when the number of deaths from the virus in the rest of the world surpassed those in China, the tables have turned. And as Japan now confronts its own outbreak, Chinese cities and individuals have stepped up to return the favor.

"The situation is currently changing, and friends who had given their all to help us are now encountering the same difficulties. The epidemic in Japan is now also very serious. Since we have just experienced this, we know what to do best!" he said in a Weibo post dated March 2.

Chinese diplomatic missions have also been regularly posting reports of donations from local Chinese governments and firms to Japan on their official Twitter accounts.

On March 12, the Chinese Embassy in Japan posted a video showing the arrival of 20,000 masks donated by Heilongjiang Province in far north China to Hokkaido, the prefecture with the most infection cases in Japan. It also earlier retweeted reports that Sapporo had received 25,000 masks and sets of protective gear from sister-city Shenyang in China's northeast Liaoning Province.

Meanwhile, the Chinese Consulate General in Nagoya said on March 17 that it had donated 30,000 surgical masks to Nagoya City East Medical Center in Aichi Prefecture. The central Japanese prefecture currently has the most domestic COVID-19 cases after Hokkaido.

In Tokyo, individuals and local Chinese community groups have taken steps to express their gratitude by pitching in to help people take precautions against the virus. 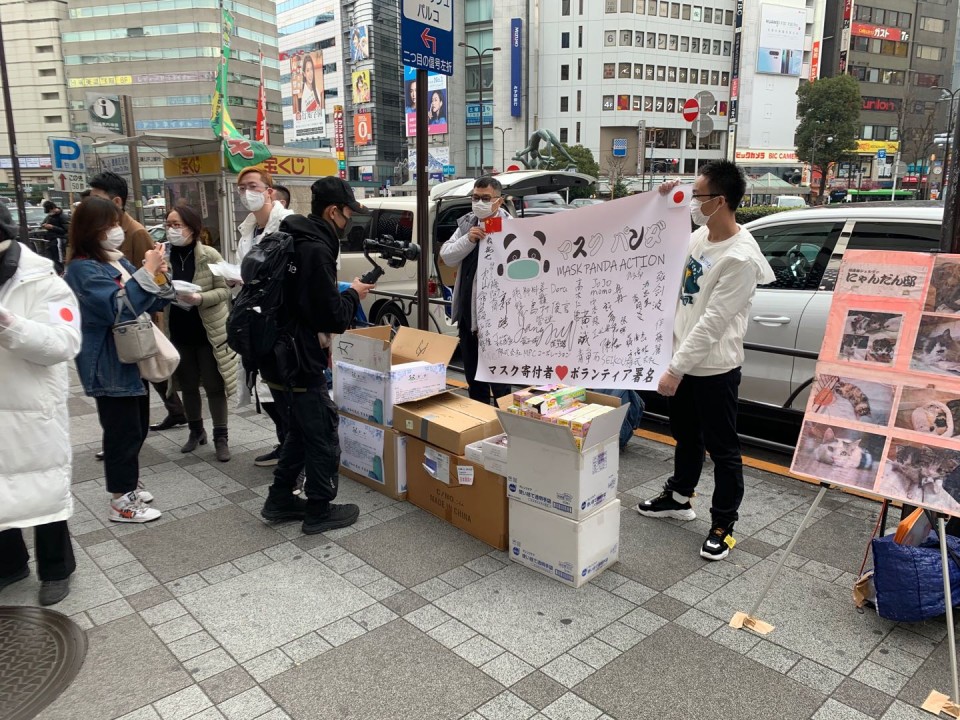 Volunteers from one group, calling itself the Mask Panda Action team, assembled around Ikebukuro Station on Feb. 29 to hand out free masks to passers-by.

"We saw a lot of Japanese people couldn't buy masks, and some weren't taking it seriously enough," said Shungen Shimamura, 48, one of the organizers of the group.

"Previously, I would just hand out masks to people walking on the street if I saw they didn't have one. But I couldn't help many people that way, so a few friends and I got together and thought about how we could do something good for the community," he said.

Shimamura, who is half-Chinese and was born and raised in Shanghai, established Mask Panda Action around mid-February with Huang Bin, 35, another Shanghai-born resident of Japan. The pair mobilizes volunteers through WeChat, with many of the masks donated by the individuals themselves.

Huang, who has lived in Japan for around 15 years and currently runs an eatery, said that he hoped giving away masks would help change people's image of Chinese people after media reports in the initial stages of the virus' spread in Japan that Chinese residents were buying up masks, sometimes to resell at a profit.

Indeed, Japan has not been completely immune from discrimination against Chinese nationals due to the virus, including a #ChineseDontComeToJapan hashtag that trended on Twitter in the early stages of the outbreak. But the goodwill appears to be paying off. 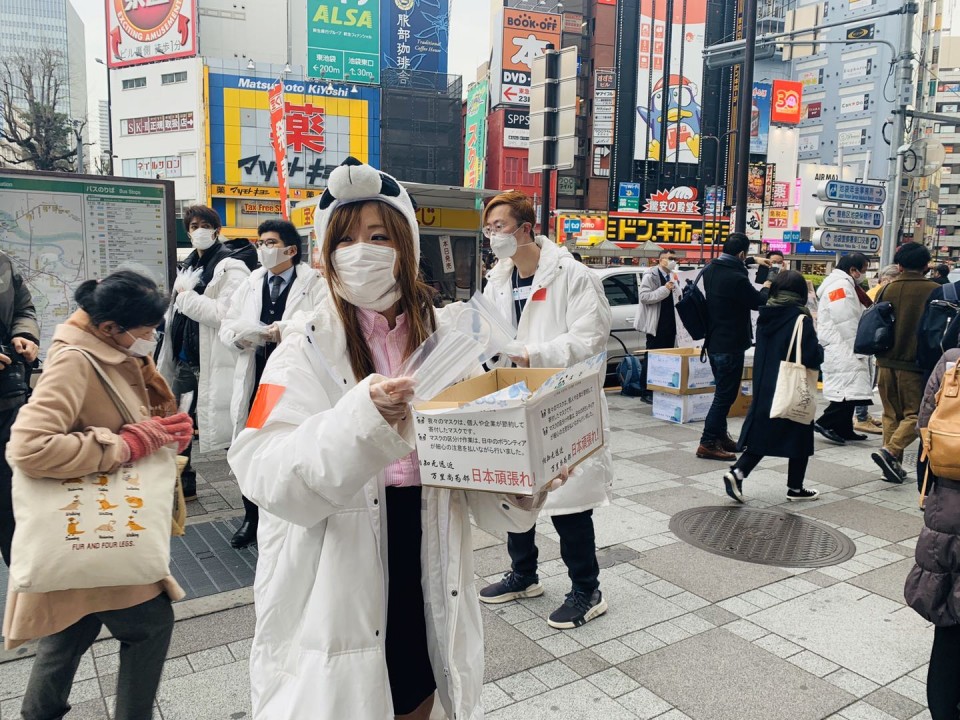 "The response from passers-by was very good. We distributed over 4,000 masks in under an hour," Huang said.

Takuya Komatsu, an actor who is also active in China and Taiwan who was the only Japanese volunteer that day, said he decided to participate because he felt moved by the sentiments of Chinese residents in Japan, and wanted to help.

"At that time, there was a big response towards Japan's support even on social media in China, and you could see friendly comments about Japan and Japanese people from Chinese users like never before," he said.

From a Japanese standpoint, an improvement in bilateral relations would also greatly benefit the economy after the virus is contained, he added.

The group said it plans to hold its next mask-distributing session around Shibuya Station next week, and will likely hold subsequent activities at other major stations in Tokyo if necessary.

"We will continue our activities as long as the COVID-19 situation doesn't improve," said Shimamura.