Prime Minister Shinzo Abe said Saturday that Japan will compile its "boldest-ever" stimulus package including cash handouts to struggling households to cope with the negative economic impact from what could become a prolonged coronavirus outbreak.

The size of the stimulus will be larger than the 56.8 trillion yen ($526 billion) emergency package put together in the global financial crisis following the collapse of Lehman Brothers in 2008, Abe told a press conference. The package entailed actual expenditures of 15 trillion yen.

The government will craft an extra budget for fiscal 2020 to finance the planned stimulus measures and submit it to parliament within 10 days, Abe said.

"We will draw up the boldest-ever package by using all policy tools, such as reducing or exempting tax payments and extending financial assistance," Abe said.

The virus outbreak that began in China late last year has come at a sensitive time for the Japanese economy which is seen as teetering on the edge of a recession. Calls have grown for the government to give cash to all households and to reduce the consumption tax rate, which was raised to 10 percent from 8 percent in October. 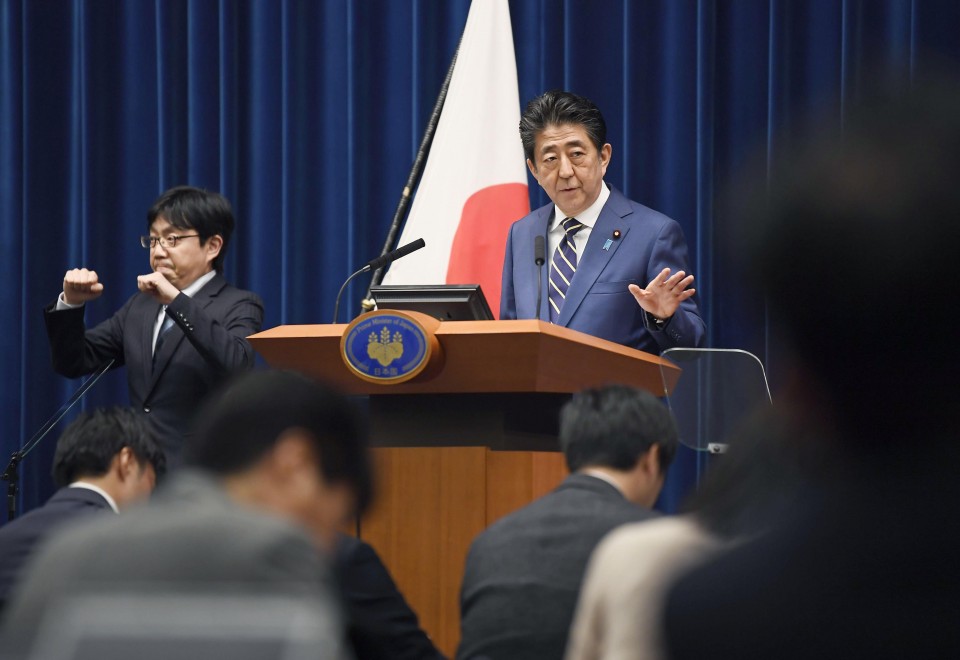 Abe indicated that the government will limit the scope of eligibility for cash handouts. He also struck a negative tone about lowering the tax rate, saying he will favor steps that could cause an economic boost rapidly.

The envisaged package will also prioritize extending support to small and midsized companies hit hard by the coronavirus outbreak that has led to travel curbs and disruptions in economic activity.

The government will enable banks to extend loans with no interest or collateral, Abe said. At present, the state-owned Japan Finance Corp. has been largely in charge of such a loan program to help smaller companies suffering sharp revenue drops.

The government will also offer subsidies to companies that maintain employment despite worsening business conditions.

Japan has already drawn up two emergency packages in response to the outbreak, the first totaling 15.3 billion yen and another with 430 billion yen in actual spending.

A sense of vigilance has heightened in recent days as the Tokyo metropolitan government is scrambling to prevent an explosive increase in infections. The number of daily reported cases has been on the rise in the capital, with 63 new cases confirmed on Saturday.

Across Japan, the number of cases, including about 700 from the quarantined cruise ship Diamond Princess, has surpassed 2,400. Globally, infections have exceeded 600,000 based on a tally by Johns Hopkins University of the United States.

Tokyoites have been asked to stay home and people in neighboring prefectures to refrain from going to the city, to reduce transmission risks.

"I have to say that people need to brace for a battle (against the coronavirus) that could be prolonged," Abe said, adding that the government will formulate the stimulus package while considering the possibility of declaring a state of emergency.

"At this point, we don't need to declare a state of emergency...but we are still facing a critical moment," Abe said.

The government launched a national headquarters on the coronavirus response on Thursday, setting the stage for Abe to make such a declaration to allow prefectural governors to take steps to prevent the spread of the virus, even though people's rights would be restricted.

In the press conference, Abe unveiled plans to distribute 11 million washable cloth face masks to all elementary and junior high schools in the country.

Abe's government has decided to allow schools to reopen when the new academic year begins in April, ending its request made in late February that all schools shut.

The request has troubled parents, with many of them forced to take time off to care for their children.

However, Abe said Saturday he will ask health experts next week to reexamine the appropriate timing for school reopenings, hinting that they might be further delayed.

The pandemic has also affected the schedule for the Tokyo Olympics and Paralympics. After facing intense pressure from athletes and sports officials, the International Olympic Committee decided this week to postpone the events for about a year from this summer.

"No global leader can say at this point when the outbreak will end," Abe said. "Unfortunately, I myself cannot answer that question, either."

In the latest Kyodo News poll released Saturday, 78.7 percent said the delay of about one year was "appropriate."

Even with the delay, Abe will likely witness the Tokyo games as prime minister as his term as president of the ruling Liberal Democratic Party ends in September 2021.

As the term of House of Representatives members will end next year, some are wondering when Abe will dissolve the lower house for a general election.

But he said, "I will put that out of my head completely and focus on this battle against the virus."