Another roadblock was thrown into the path of 36-year-old former Japan captain Makoto Hasebe on Friday, when his team's German Cup semifinal was postponed due to the coronavirus crisis.

The final season of Hasebe's current contract with Eintracht Frankfurt had already fallen into doubt after he and his colleagues were sent home following positive tests for the virus among some of the team's players. This month the number of infections reported in Germany exceeded 40,000.

"We don't know what the future will bring," Hasebe said in a recent interview with German newspaper Bild. "It's a difficult situation, but we have to take it on, while remaining positive." 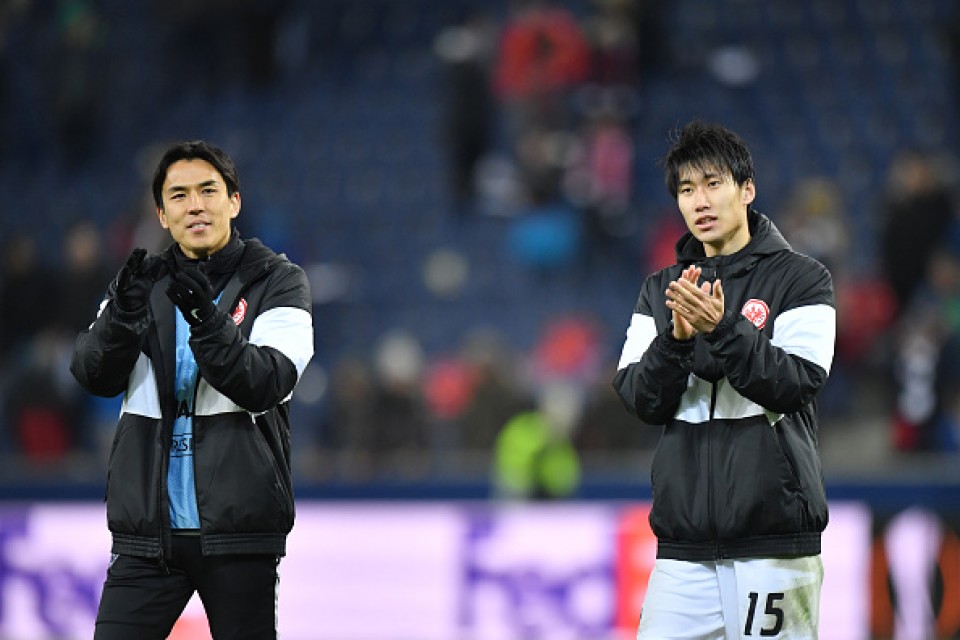 (Makoto Hasebe and Daichi Kamada of Frankfurt talk after the UEFA Europa League round of 16 second leg match between RB Salzburg and Eintracht Frankfurt at Red Bull Arena on Feb. 27, 2020 in Salzburg, Austria.)[Bongarts/Getty/Kyodo]

Eintracht Frankfurt, who also feature Japan international Daichi Kamada, were due to face heavyweights Bayern Munich away in the first semifinal on April 21, with fourth-tier Saarbrucken hosting Bayer Leverkusen the following day.

But with the top two tiers of Germany's professional soccer establishment likely to extend their hiatus until at least April 30, the German Football Association (DFB) said it was "only logical" to postpone the cup semifinals to an unspecified date.

Although the season has been extended past its usual finish in May into June, the prospects are not clear at all.

"Due (to) the ongoing crisis, no football is currently being played and training is also very limited for sides," the DFB said in a statement on its website. "It's extremely likely that things will not have improved in time for the cup semifinals, meaning that football matches will still be prohibited on those dates."

Kamada, who returned from a loan stint with Belgian side Sint-Truiden last year, has performed strongly in this season's cup competition for Frankfurt, winners of the trophy in 2018.

The 23-year-old attacker struck a second-half goal to seal a 2-0 quarterfinal win over visiting Werder Bremen on March 4.

The Bundesliga halted play over the coronavirus pandemic on March 13, the first such suspension since World War II. Players from several clubs have agreed to waive a portion of their pay to help support club employees.

The uncertainty felt by the clubs' employees and fans is shared by the players, including Hasebe, with local media reporting Frankfurt are not looking to extend his contract.

"I can't do anything," he said according to Bild. "Of course I want to continue playing, but what's important is that we manage the spread of the virus."