Tokyo stocks plummeted Friday on escalating fears about the coronavirus outbreak, with the Nikkei index finishing at its lowest level in over three years after briefly posting the biggest point fall in nearly three decades as global markets were routed.

The index lost over 10 percent or 1,869.03 points at one point, the largest intraday point drop since April 1990 when Japan saw emerging signs of the bursting of the asset-inflated bubble economy.

But a sharp rebound in U.S. stock futures eased worries about the market outlook moderately, helping lift the U.S. dollar against the yen to the mid-105 yen zone and the Nikkei index to trim some of its earlier losses, brokers said. 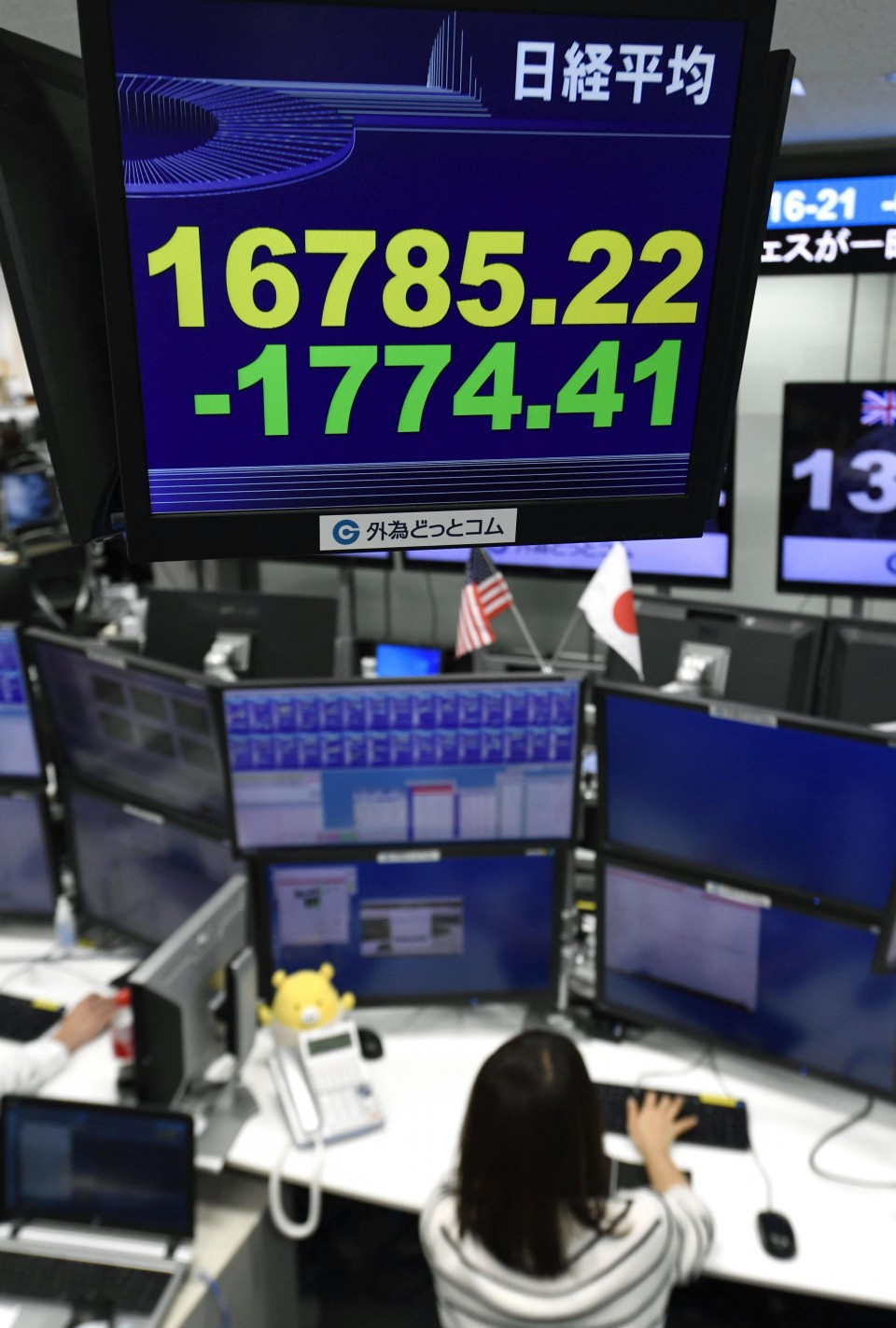 "Panic started from the open and accelerated," said Akira Tanoue, a senior strategist in the investment research department at Nomura Securities Co.

Many stocks remained untraded for the first 10 minutes after opening due to the massive number of sell orders.

The morning sell-off in the Tokyo stock market followed another plunge on Wall Street overnight, with the Dow Jones Industrial Average posting its biggest percentage fall since the 1987 Black Monday crash as the U.S. travel ban from some European countries caused concerns over the impact of the virus on global businesses, brokers said.

In Europe, stocks in Britain and Germany also dropped 10 percent or more.

The Tokyo market shrugged off the Bank of Japan's offer to inject 500 billion yen ($4.8 billion) into the financial system through Japanese government bond purchases to cushion the impact of the viral outbreak.

The market rout prompted the Ministry of Finance, the Financial Services Agency and the BOJ to hold an emergency meeting to discuss the situation. The government and BOJ officials reaffirmed that they will continue to closely monitor markets and take appropriate action as needed to ensure the stability of the financial system.

Sentiment was also dampened by U.S. President Donald Trump's remark on Thursday that officials should consider postponing this summer's Tokyo Olympic Games for one year.

"Selling by foreign investors who are pricing in the risk of a delay in the Tokyo Olympic Games dominated the market," said Norihiro Fujito, senior investment strategist at Mitsubishi UFJ Morgan Stanley Securities Co.

Caution over the economic impact from the coronavirus pandemic remained strong but rises in U.S. stock futures and crude prices in the afternoon helped improve sentiment modestly, said Makoto Sengoku, a market analyst at the Tokai Tokyo Research Institute.

Meanwhile, Japanese government bonds were sold as concerns about the financial market outlook led investors to increase holdings of cash. The yield of the benchmark 10-year government bond increased to minus 0.010 percent, up 0.055 percent from the previous day's close.

On the First Section, declining issues outnumbered advancers 2,099 to 64, while three ended unchanged.