While this summer's Tokyo Olympics and Paralympics were postponed for about a year due to the new coronavirus pandemic, the lingering question is whether the global health crisis will be under control by then.

The Japanese capital is facing a mounting challenge following the first Olympic postponement in history, with local organizers confronted with the task of reworking the preparations of the last six years. 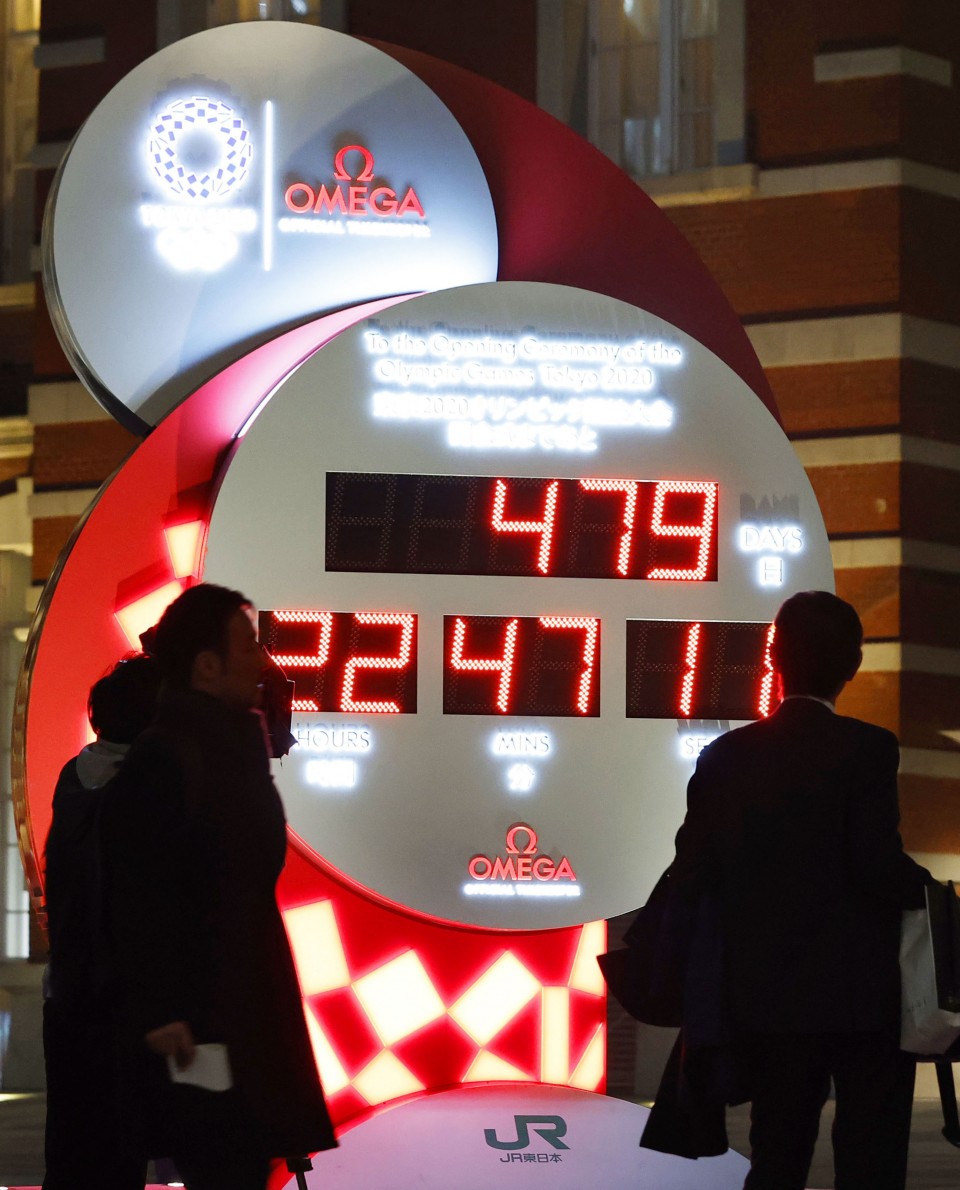 (A Tokyo Olympic countdown clock set up near JR Tokyo Station shows on March 30, 2020, the number of days remaining until the games.)

The International Olympic Committee and the local organizers agreed Monday that the Tokyo Olympics, originally set to open on July 24 this year, will run between July 23 and Aug. 8, 2021, followed by the Paralympics from Aug. 24 to Sept. 5.

The IOC has stressed the importance of holding the Tokyo Games in 2021, with President Thomas Bach saying the sporting event can be a "celebration of humankind after having overcome the unprecedented challenge of the coronavirus."

However, as the organizers try to settle one problem after another, ranging from securing venues and lodging for athletes and officials, gathering volunteers and figuring out how to shoulder the additional costs, the key to hosting a successful Tokyo Games is something they cannot control by themselves.

On March 24, Japanese Prime Minister Shinzo Abe and Bach agreed to hold the Tokyo Olympics in the summer of 2021 at the latest after they were pressured by athletes to make changes to the schedule to prevent a further spread of the coronavirus and to provide them a chance to prepare fully.

Yoshiro Mori, president of the Tokyo organizing committee, said in a press conference shortly after the agreement was reached that the virus is their "top concern" but said he expects the situation will change due to medical advancements.

Kazuhiro Tateda, who heads the Japanese Association for Infectious Diseases, says whether infections of COVID-19, the respiratory disease caused by the new coronavirus, could be drastically curtailed by next summer is still unknown, but predicts the pace of the spread will decelerate.

"The new coronavirus has been spreading at a very rapid pace," Tateda told Kyodo News over the phone. "In the next few months, the virus will spread in both the northern and southern hemispheres. If those people who recovered become immune to the virus, we can say that the outbreak will settle down."

"But we can't tell what the situation is like in a year," he said.

Speaking at the press conference with Mori, the organizing committee's CEO, Toshiro Muto, said a one-year postponement was a "reasonable" decision at a time when no health experts can say for sure when the pandemic will end.

The March 24 decision came just two days before the initial start of the 121-day torch relay in Japan and exactly four months ahead of the opening of the Olympics.

It was also made on the day Tokyo overtook the country's northern main island of Hokkaido as the prefecture with the most infections.

"If I'm asked whether the coronavirus (situation) settles in the summer of next year, I can't say that it will be absolutely fine," Muto said. "But if something like that happens, not only Japan but also the rest of the world will be in a devastating situation. I predict people to come up with new drugs if that's the case."

Tateda, a member of the Japanese government's panel of experts, said the organizers made a "rational" choice, but they need to monitor the situation throughout their preparation period and make changes to the schedule if necessary.

Meanwhile, Koji Wada, a professor at the International University of Health and Welfare, says staging the Olympics next summer could be "difficult," given that the pneumonia-causing virus has spread to all of the world's seven continents except Antarctica since it broke out in China late last year.

"I think it's a little too optimistic to assume that many people will become immune to the virus in one year and three months and be able to travel back and forth," he said in a recent interview. 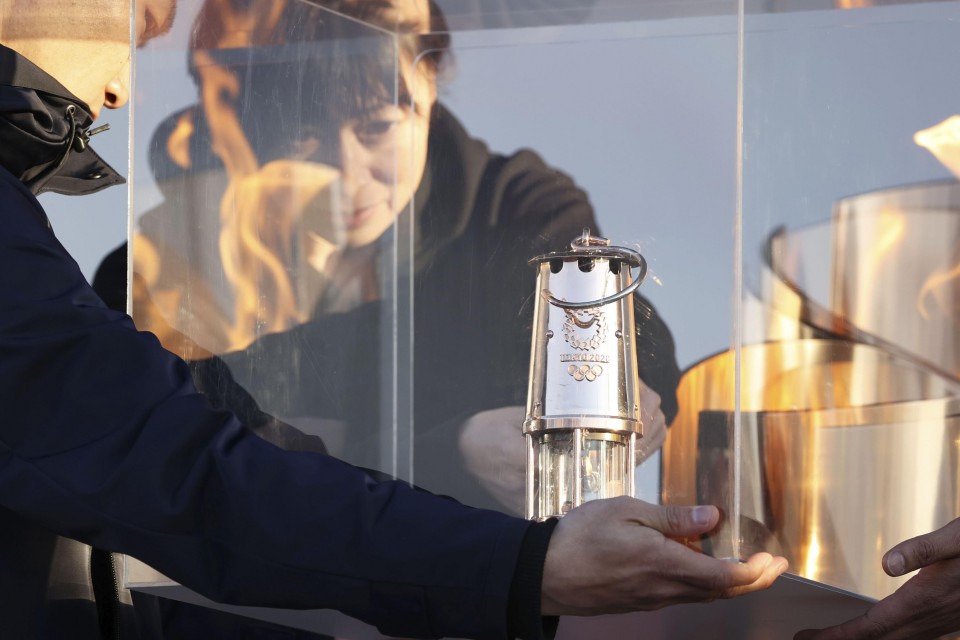 (The 2020 Tokyo Olympic flame is put in a lantern following its display to the general public on March 25, 2020, in Iwaki, Fukushima Prefecture.)

"Two years might have been better, but barely possible. Even then, there will be cases of infections around the world, and the games will have to go ahead under tough circumstances," he said.

Wada said staging the Olympics and Paralympics will be different from any other event because a huge number of athletes and spectators from all over the world will gather, and the development of vaccinations and medications will be unlikely in a year.

"It is difficult to place countermeasures against infections to athletes," he said. "What are they going to do with athletes who come from countries that still have cases of infection? People will suggest putting them under quarantine for about two weeks, but what would happen if that athlete tests positive?"

The European Union's disease control body released a report on March 25 saying that the summer heat and humidity will unlikely prevent the virus from spreading, adding there is no evidence that COVID-19 displays a marked seasonality.

"Based on preliminary analyses of the COVID-19 outbreak in China and other countries, high reproductive numbers were observed not only in dry and cold districts but also in tropical districts with high absolute humidity, such as Guangxi (China) and Singapore," the European Centre for Disease Prevention and Control said in the report.

Wada warns that holding the Summer Games when the virus situation is not under control will take away from the fairness of the sporting extravaganza.

Especially, it would become difficult for athletes competing in contact sports, such as wrestling and judo.

The Tokyo Olympics are not the first games to be threatened by global health issues.

The 2010 Vancouver Winter Games were held following the outbreak of swine flu the previous year, while the previous Summer Games in Rio de Janeiro were held amid fears over the mosquito-transmitted Zika virus.

However, Wada said the new virus is not like any other, characterizing it as "nothing we have experienced in recent history."

"The coronavirus is very difficult compared to other viruses because it spreads through people who do not show symptoms. And since none of us are immune to it, it can spread all over the world," he said.