Sumo's two highest-ranked grapplers will fight it out on Sunday for the championship of the 15-day Spring Grand Sumo Tournament.

For the first time since July, Mongolian-born grand champions Hakuho and Kakuryu will both be competing on the final day for the title after wrapping up wins to improve to 12-2 on Saturday at Edion Arena Osaka.

More than six years have passed since a tournament entered the final day where one bout on the schedule would decide the winner. The last such fight saw former yokozuna Harumafuji defeat Hakuho in November 2013.

Unfortunately, the anticipation of Sunday's grand finale will occur in relative quiet, with the tournament taking place behind closed doors in order to stem the spread of the new coronavirus outbreak.

The Japan Sumo Association decided to go ahead with the tourney on the condition it would be canceled should any wrestler or association member test positive for the virus. 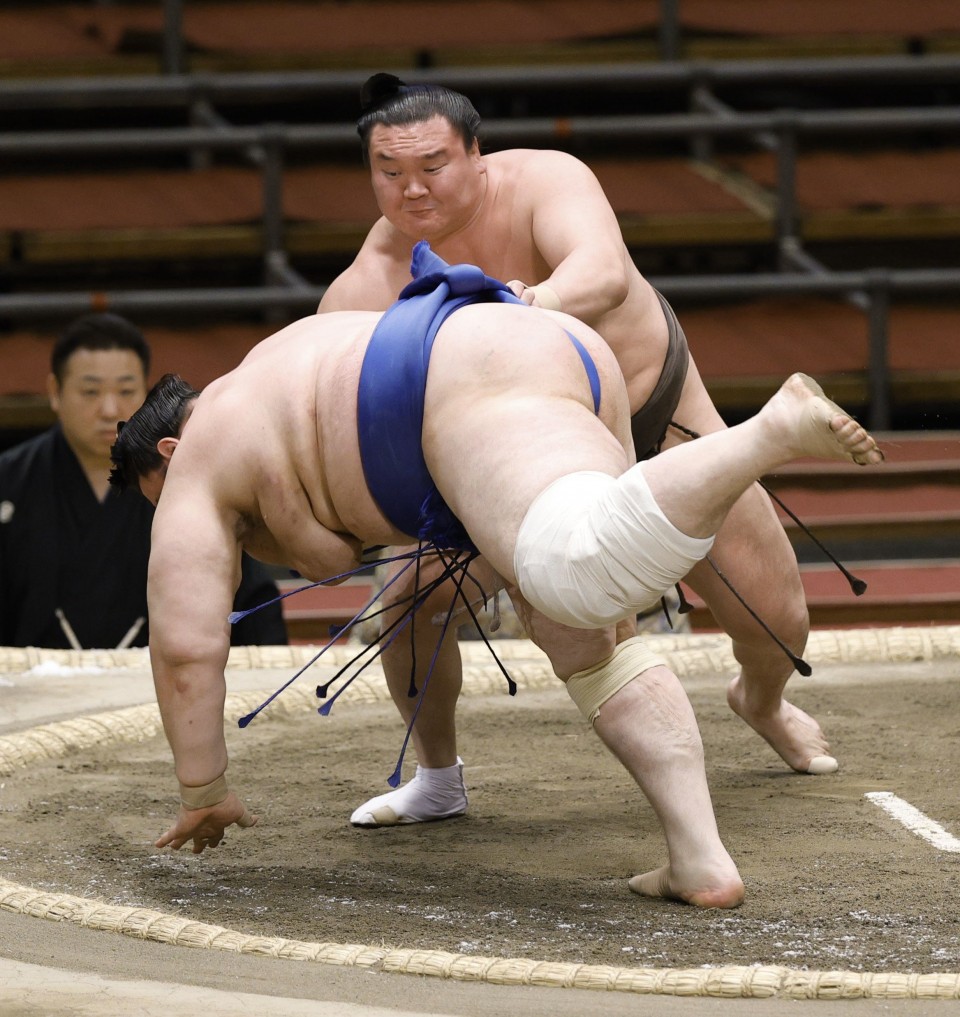 In Saturday's final bout, Kakuryu survived a scare against promotion-chasing sekiwake Asanoyama, who came looking for 12 wins in Osaka that might have smoothed his ascension to ozeki, sumo's second-highest rank. The win evened Kakuryu's career mark against the 26-year-old rising star at 2-2.

Asanoyama appeared en route to a crucial win as he flung Kakuryu out of the ring, but as the two fell from the ring, the sekiwake's elbow touched down first, leaving him with a 10-4 record.

Hakuho, looking to extend his record for career championships with his 44th and his first since November, overcame one false start to easily put down Aoiyama.

The yokozuna, who was granted Japanese citizenship in September, received the charge and deflected Aoiyama's arms, preventing him from grabbing a belt hold while shunting the 193-kilogram Bulgarian to his right and down to the sandy surface.

The loss was the No. 13 maegashira's 22nd against Hakuho in 23 career bouts. 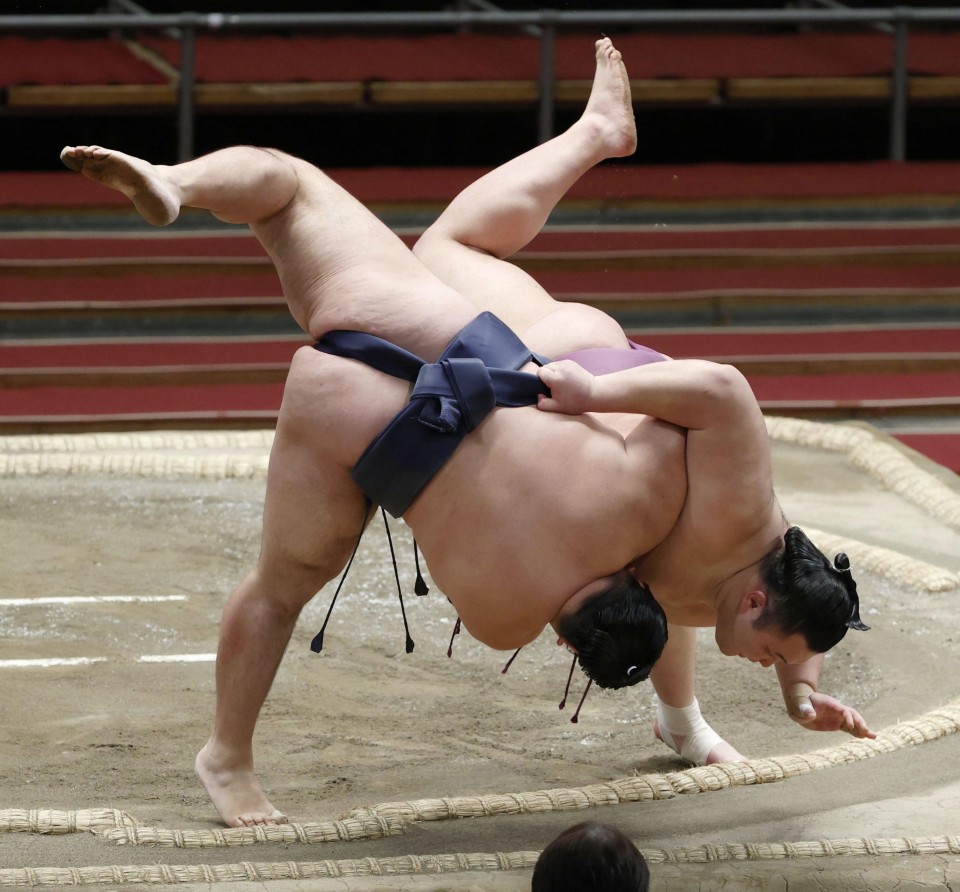 Takakeisho (7-7), who has already lost his ozeki ranking once for failing to record eight wins in two consecutive tournaments, gave himself a chance at eight wins with a skillful frontal thrust out of No. 5 Onosho (8-6).

If Takakeisho fails to win on Sunday, he'll be fighting in the next grand tournament as a "kadoban" ozeki in jeopardy of losing his rank.

Popular komusubi Endo was yanked down to a seventh loss, the result of a poor charge against No. 4 Abi (6-8). The maegashira made first contact, placing one hand on each of Endo's shoulders to prop him up before pulling him down to defeat.

Endo, who has never wrestled as high as sekiwake, will now take his bid for a winning record down to the last day.

No. 9 Takanosho earned his 11th win with a solid shoving attack, pinning No. 3 Mitakeumi's arms to prevent him from getting a belt hold that could have turned the tables. Mitakeumi, a former sekiwake looking to return to the three "sanyaku" ranks below yokozuna, fell to 10-4.

Daieisho (8-6), demoted to No. 1 maegashira after his lone tournament as a komusubi in January, will likely get another shot in the sanyaku after a hard-fought win over No. 5 Ryuden (5-9). 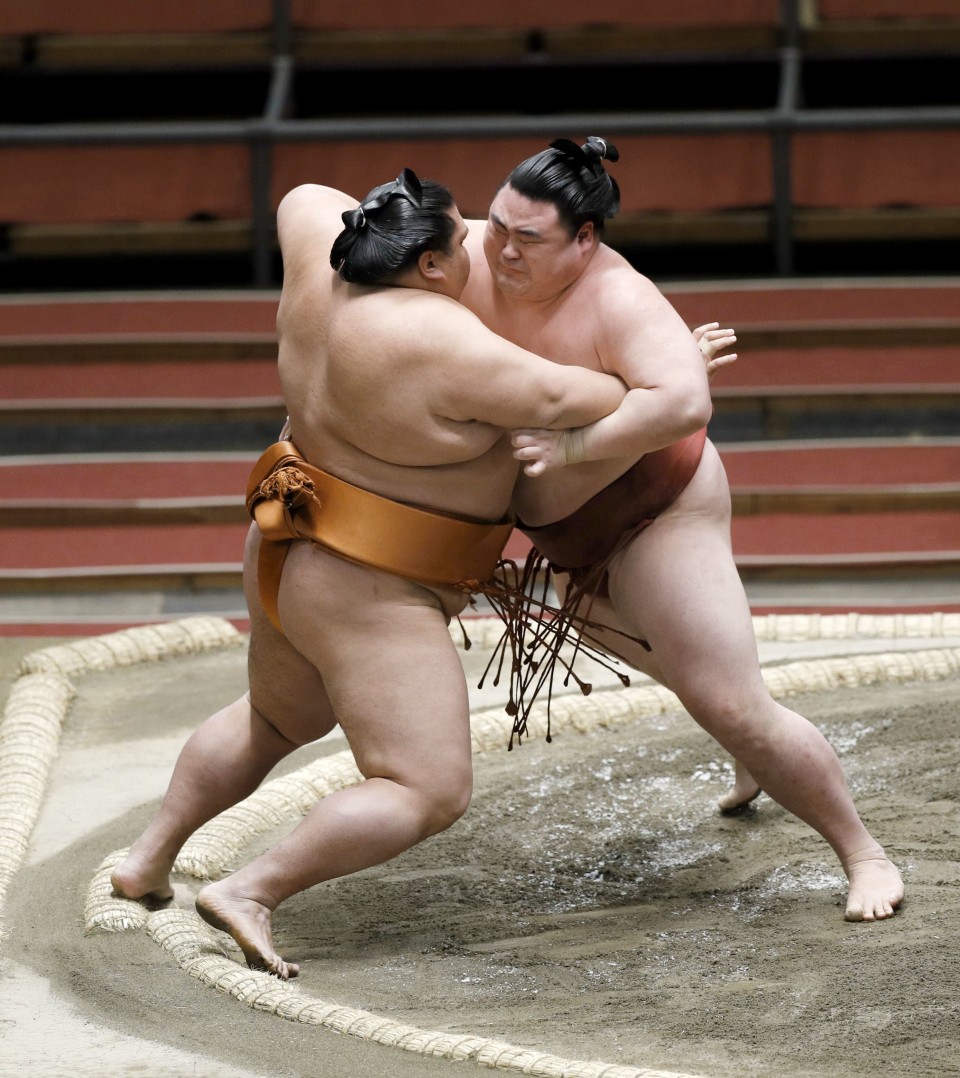 Makuuchi-division debutant Kotonowaka threw No. 14 Nishikigi (5-9) to earn his eighth win, secure a winning record and ensure he'll be competing in the top division in the next grand tournament.

Former ozeki Kotoshogiku, a No. 13 maegashira, failed to earn his eighth win in his bout with No. 11 Chiyotairyu (8-6). Kotoshogiku has not had a winning record since he won 11 bouts here a year ago.