A legal change this week will allow Prime Minister Shinzo Abe to declare a state of emergency to address the new coronavirus outbreak if he deems it necessary.

But as the total number of infections in Japan surpasses 1,000, including about 700 from a quarantined cruise ship, the new power symbolizes a dilemma for Abe: Bolder steps to curb infections raise the chances of the economy slipping into a recession.

Abe, who faced criticism for being too relaxed in his initial response to the outbreak, has recently taken tougher action. Steps include a closure of schools that took many by surprise and most recently restrictions on visitors from China and South Korea that could severely hit the tourism industry.

"We have been causing great trouble to the Japanese people as we are implementing measures to prevent the spread of new coronavirus infections," Abe told a government task force meeting on Saturday.

Having shut most schools a few weeks ahead of the spring break that precedes the new academic year in April, Abe is following up with support measures for working parents, many of whom will need to take time off to take care of children suddenly at home.

A fresh emergency package to be compiled on Tuesday, meanwhile, will likely include such steps as the launch of a zero-interest loan scheme for small and midsize companies struggling to stay afloat as the virus scare dampens activities.

Sports and music events have been cancelled and popular leisure spots such as theme parks closed to reduce group transmission risks, while many are shunning going shopping or eating out. Some economists say consumers are drawing in their horns even more than in the aftermath of the earthquake, tsunami and nuclear disasters of 2011, when a mood of restraint in sympathy for victims slashed spending.

The economy shrank an annualized real 6.3 percent in the October-December period, the sharpest fall since 2014, as a consumption tax hike in that quarter apparently took its toll.

Martin Schulz, a senior research fellow at the Fujitsu Research Institute, said the Japanese economy was already on its way to a technical recession before the coronavirus crisis began. But "unplanned" government actions such as school closures are disrupting the economy.

Negative growth of as much as 1.5 percent is expected in the three months through March before a rebound in the July-September quarter as "the current mood of panic subsides," according to Schulz.

"The big question is how badly trust in the effectiveness of Abenomics policies has been damaged," he said, referring to Abe's economic strategy. 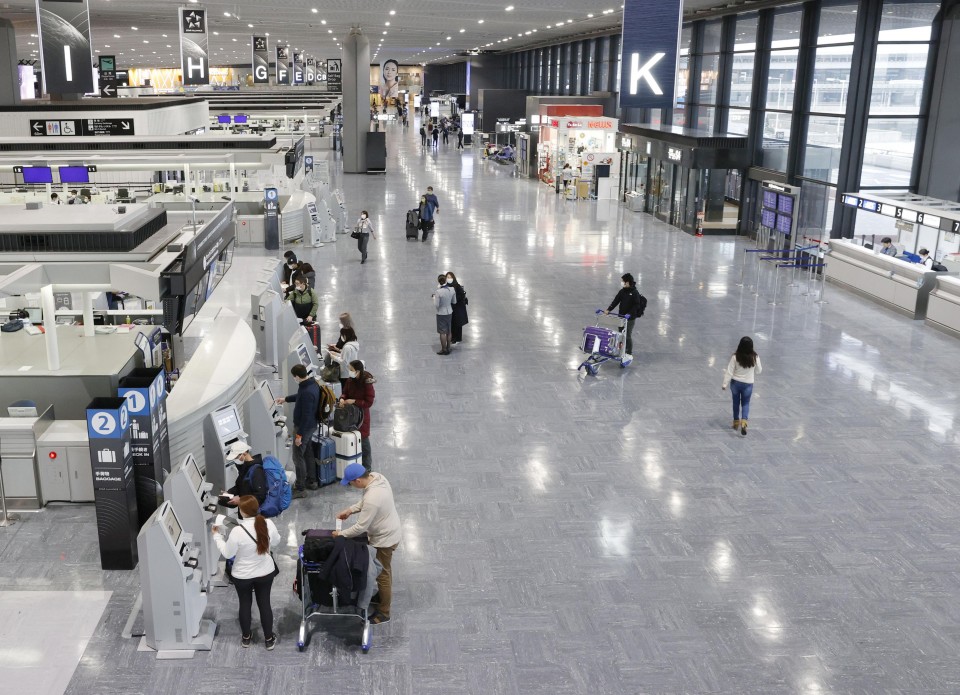 (Fewer people are seen than usual at a departure lobby of Narita airport near Tokyo on March 8, 2020.)

From Monday to the end of the month, all those traveling from coronavirus-struck China and South Korea, including Japanese nationals, will be asked to stay in designated facilities such as hotels for 14 days, although the quarantine is not mandatory. On top of that, about 2.8 million visas issued to Chinese and 17,000 to South Koreans will become invalid, the Foreign Ministry said.

The impact of restricting travel could be severe as visitors from the two countries accounted for nearly 50 percent of all travelers to Japan last year. Almost 80 percent of the 6.95 million visas issued in 2018 went to Chinese nationals, with most for tourism purposes, according to ministry data.

Economists at the Daiwa Institute of Research have estimated a negative impact of about 780 billion yen ($7.4 billion) on the economy based on the assumption that the number of inbound tourists will fall by 4 million, including 2 million Chinese and 500,000 South Koreans, between February and April from a year ago.

Uncertainty remains over whether the additional steps Abe has announced will help Japan bring the viral outbreak under control while critics and opposition lawmakers say the measures came too late.

"The right order should be to strengthen border controls first and shift to preventing the spread of the virus in the next phase," said Masato Imai, an opposition lawmaker. 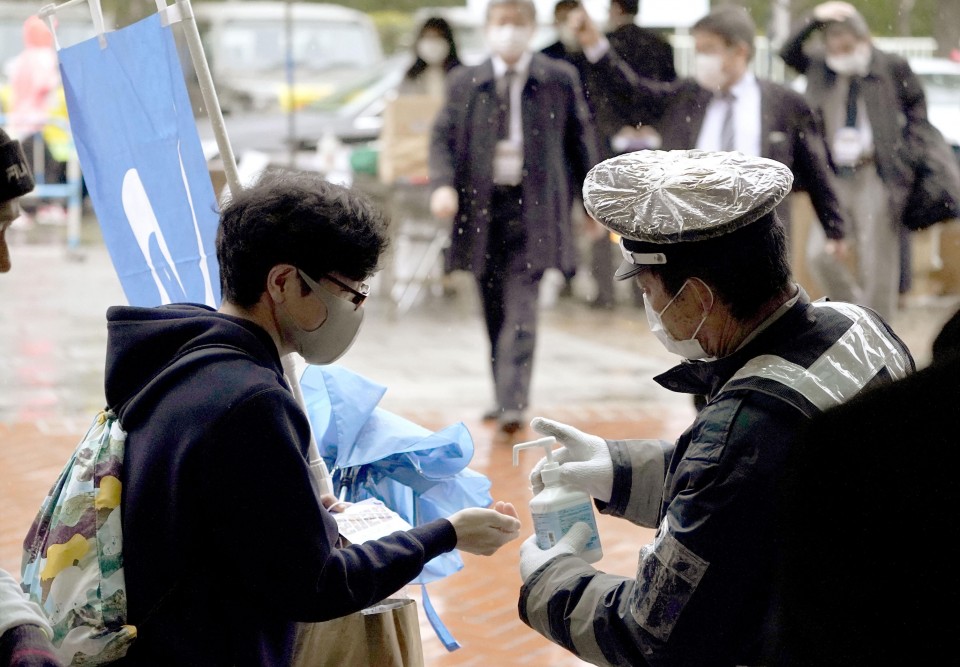 (An official disinfects a visitor's hands at Ojiyama Stadium in Otsu, Shiga Prefecture, during the Lake Biwa Mainichi Marathon on March 8, 2020.)

The travel curbs coincide with the passing of the "two week" period that a government panel of medical experts said would be critical in determining whether Japan can rein in infections.

"Mr. Abe is increasingly pressed to do all he can to stem infections and turn the situation around as soon as possible," said Masahiro Iwasaki, a political science professor at Nihon University.

To seek cross-party cooperation, Abe in a rare move met separately with five opposition leaders to ask for support for the legal change necessary for him to declare a state of emergency.

Once declared, prefectural governors can instruct local residents to stay indoors and ask for cancellation of sports and entertainment events. They can also demand that medicine and other necessary goods be sold at lower prices or handed over while urging train and logistic companies to transport medicine.

Given the limiting of individual rights that a state of emergency would entail, there are calls even within the ruling bloc for clear criteria for triggering a declaration. The law states that there must be an emergence of nationwide and rapid infections that are feared to have a serious impact on people's lives and the economy.

"Any emergency declaration would raise public worries and we may see the sort of panic buying (of medical goods and daily necessities) that we saw recently," Iwasaki said. "The impact on ordinary people needs to be carefully weighed. Most of all, what Japan does will be closely watched before the Tokyo Games."

Bank of Japan prodded to act amid virus spread, but policy options limited