Jerry Sands may be a longshot bet to have success with the Hanshin Tigers this season, but Korean pro baseball's 2019 RBI leader has a history of bucking long odds.

Sands turned pro after being selected in the 25th round of Major League Baseball's 2008 amateur draft, and before joining Korea Baseball Organization's Nexen Heroes (now the Kiwoom Heroes) midway through the 2018 season, he played in 156 major league games.

The 32-year-old Sands, who played in the majors for the Los Angeles Dodgers, Tampa Bay Rays, Cleveland Indians and Chicago White Sox, is one of seven imported players on Hanshin's roster.

Unfortunately only four can be active at any one time during the regular season, and one, first baseman Justin Bour, was also a 25th-round pick, in 2009.

"It's a competition," Sands told Kyodo News on Wednesday at Jingu Stadium. "We all know what it is."

"I didn't get a whole lot of opportunities in the big leagues and it is a young man's game. As you get a few more years on you, it's that much harder."

Sometimes taking that next step requires a bit of luck, and after a career of being on the major league margin, Sands caught some breaks in when and where his chance came in Asia.

New imports often struggle with the large volume of tiny differences to the game they learned growing up on the other side of the planet, but Sands landed in the right place at the right time, just before KBO stopped for the 2018 Asian Games.

"I had one pinch-hit and we went right into the Asian Games, so I had a couple of weeks to get my feet under me," Sands said. "I went down to the minor leagues because they were still playing. I played quite a few games in the minor leagues."

"It was great. (Former Hanshin Tiger) Shane Spencer was the minor league manager in Korea. I got to talk to him, pick his brain a little bit."

He also had a teammate, slugger Park Byung Ho who had played in the majors with the Minnesota Twins, and Park provided first-rate advice on how pitchers might attack Sands in South Korea.

"He understood the idea of changing cultures," Sands said. "He had kind of been in my shoes. We are very similar hitters. He would help me: 'This pitcher is coming in(side)' or 'He's trying to do this to me, so maybe look here' or maybe 'A Korean pitcher tries to do this compared to an American pitcher.' It was the experience and the peer advice that really helped me right off the bat."

But the best advice Sands said he got was that things are not always what they appear to be when it comes to pitches. Sands was warned in advance that the quality of spin that Korean pitchers put on their fastballs made them look slightly faster than the speeds displayed on stadium scoreboards. While seemingly a small thing, it helped him adjust more quickly. 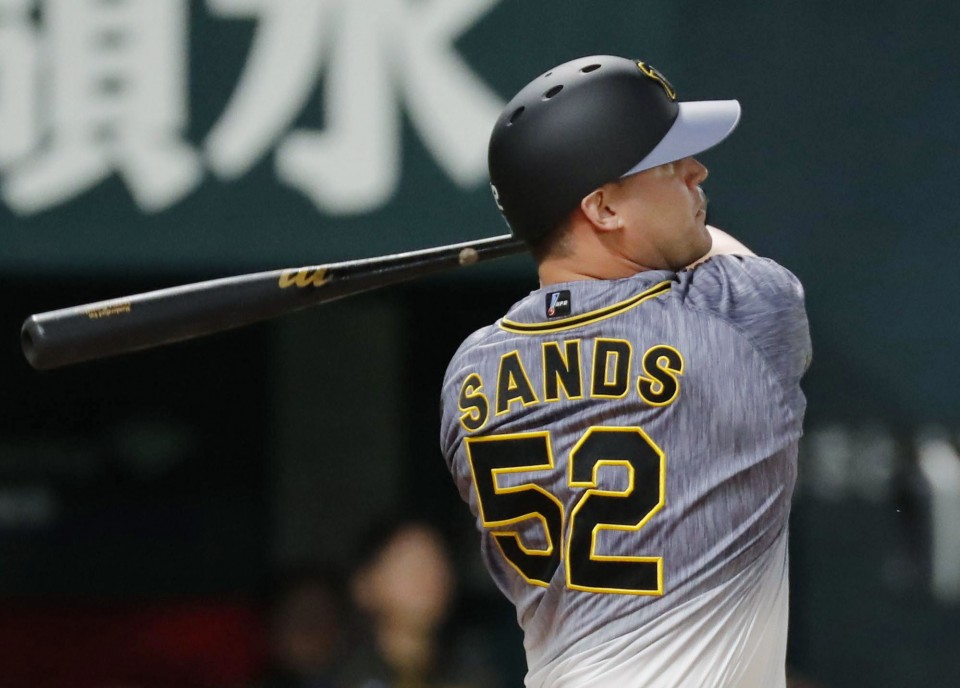 "Everyone told me the velocity wasn't what you were used to in the States," Sands said. "But...they throw the ball so true and it has a little bit of extra life on it."

With that knowledge, he made a smooth adjustment to Korean pitching and soon fell in love with the Asian baseball environment.

"I always said (in South Korea) if we ever go back to Triple-A, it's going to be a really boring game," Sands said. "Because there's something going on the whole game: yelling and cheering, and something."

"It's a lot of fun. The fans are awesome. It's very enjoyable. I have no clue what they're saying half the time. They're cheering, and if they are talking junk to me, I don't know, so I just wave and smile."

Sands said he wanted to stay in Korea after winning the KBO RBI title, but said the offer just was not there. Having heard good things about Japan as well, he snapped up the Tigers' offer when it came and headed off to his next Asian challenge.

"Two of the guys I was with last year re-signed (with the Heroes)," Sands said. "When you only have three Americans on the team, you get pretty close. Our families got really close. It was tough to leave Korea. They gave me an opportunity to come over here (to Asia) so I want to pay them back. But at the same time it is a business and I've only got a few years left."

"I knew Hanshin had been scouting me during the season and when my agent said they were interested it was a very exciting opportunity."

Although the Tigers are infamous for having little patience for imported players who need time to make adjustments, Sands has not varied his preparations approach, trusting Hanshin will believe in it.

"I'm more of a process guy, get my at-bats, get my timing," he said. "With a new team you want to show your best self, but at the same time I don't want to worry about getting three hits on the first day and lose what I've been working on the whole offseason just to get those three hits."

Through Thursday, Sands' approach had delivered two home runs but few of the hits Japanese teams lust after.

But with Japan's Opening Day postponed in an attempt to stem the spread of the new coronavirus, perhaps the Tigers will exhibit a tad more patience than usual and give Sands a real shot at beating the odds once more.