Japanese and U.S. foreign ministers on Friday agreed to closely cooperate in dealing with the coronavirus outbreak, recognizing the need to enact border controls for a certain period of time to address the global health crisis.

Japanese Foreign Minister Toshimitsu Motegi and U.S. Secretary of State Mike Pompeo held telephone talks after the United States advised its citizens to avoid all international travel and urged those who are currently abroad to return immediately as the global number of infections continued to surge.

"To prevent the spread of the infection, it is necessary to implement appropriate border controls for a certain period of time, and it is important that Japan and the United States as well as related countries cooperate and share information on the issue," the Japanese Foreign Ministry said in a press release. 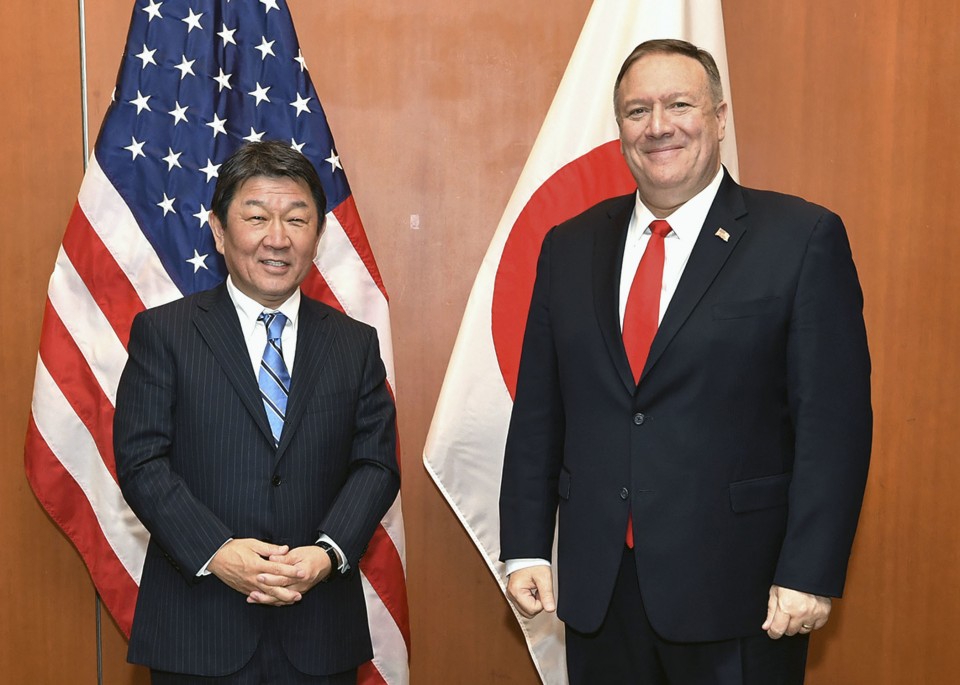 The two also agreed to share lessons learned through steps taken to contain the outbreak and to explore the possibility of jointly developing a vaccine or treatment to fight the pneumonia-causing virus.

As the foreign ministers from the Group of Seven industrialized nations are slated to hold a videoconference instead of an in-person meeting in the United States next week, Motegi and Pompeo agreed that there should be substantial discussion on the coronavirus issue and other challenges the world faces.

More than 10,000 people have died globally from COVID-19, the disease caused by the coronavirus that originated in China late last year, with the number of infections exceeding 250,000, according to data provided by Johns Hopkins University in the United States.

The World Health Organization has said the epicenter of the new coronavirus outbreak has shifted to Europe, with Italy, under a nationwide lockdown, being the hardest-hit among the G-7.

The United States, which is holding this year's G-7 presidency, has also been struggling to contain the spread of the crisis, with infection cases in the country exceeding 14,000.

It canceled the summit planned for June with the leaders of Britain, Canada, France, Germany, Italy, Japan and the United States as well as the European Union, and will instead hold a videoconference.

The pandemic has pushed many countries to impose travel restrictions and encourage social distancing, raising fears that the global economy is headed for a recession.

The U.S. State Department said in a press release that Pompeo and Motegi also agreed on the need for "transparency and accountability by all nations in the face of this international crisis."

The administration of U.S. President Donald Trump has been stepping up its criticism of China for its alleged failure to inform the world of the epidemic earlier.

"It would have been much better if we had known about this a number of months earlier. It could have been contained to that one area in China where it started," the president said at a press conference on Thursday, referring to the central Chinese city of Wuhan where the virus was first reported late last year.

"And certainly, the world is paying a big price for what they did," he added.