The two firms, which have been developing "connected cars" equipped with advanced telecommunication systems since 2017, deepened their partnership into mutual shareholdings, with each investing around 200 billion yen ($1.8 billion) by purchasing each other's treasury stocks.

Toyota said it will start the smart city project at a 175-acre site at the foot of Mt. Fuji in Susono, Shizuoka Prefecture, after closing its plant there at the end of this year.

Toyota has said only fully autonomous, zero-emission vehicles are allowed to travel on main streets in the envisioned smart city where around 2,000 residents have in-home robotics to assist their daily lives.

NTT also said it will launch an internet-led smart city project at an NTT-related block in Shinagawa area in Tokyo's Minato Ward. 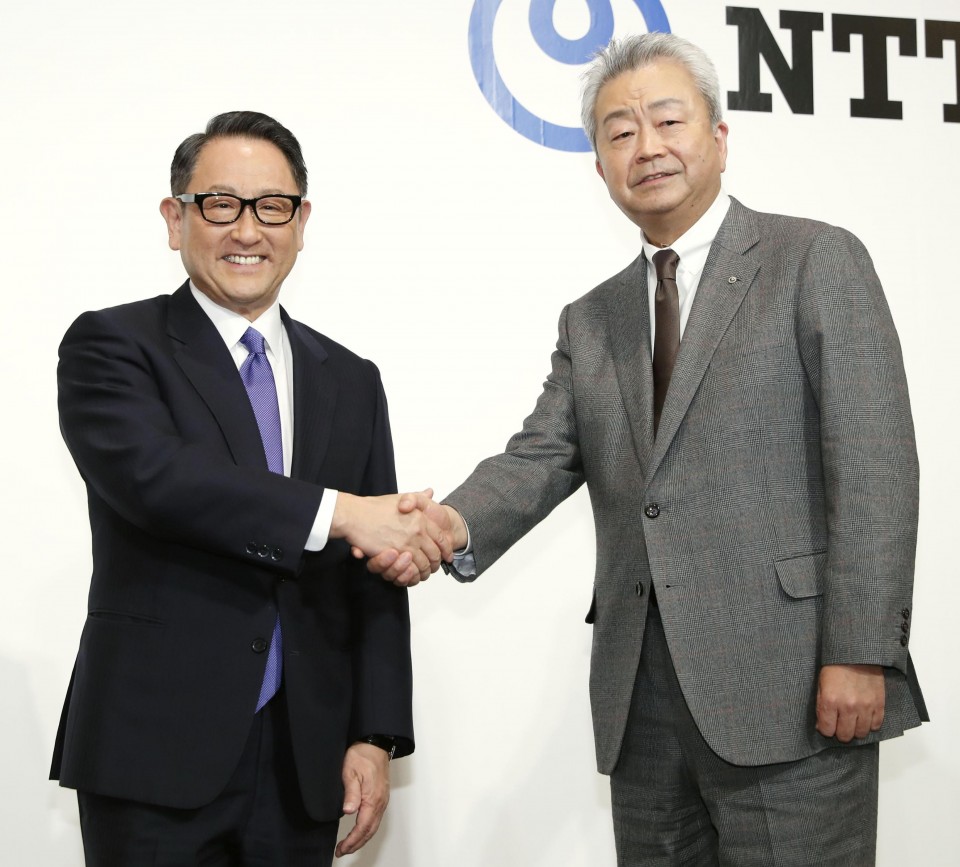 Toyota President Akio Toyoda told a press conference Tuesday that the partnership with NTT which maintains the foundation of society with its digital technology was "indispensable if not inevitable."

"Toyota sees cars as not only a means of transport but something that can be more inclusive to cities," he said. Toyota has said its self-driving box-shaped e-Palette electric vehicles can be used as convenience stores, movie theaters, restaurants or emergency shelters in such smart cities.

"We need NTT's advanced technologies as vehicles become (more) connected and are equipped with software that needs to be updated," Toyoda said, expressing hope that launch of the 5G ultrafast networks would encourage car-related technological innovation.

NTT President Jun Sawada said, "The capital alliance shows that we are going to join hands with Toyota over a long period."

"By partnering with Toyota, I believe we can heighten the presence of Japan in the world in the area of social infrastructure building," he said.

NTT said in January it will test a traffic monitoring system for a city in Malaysia to help smooth vehicle flows as well as identify model types to detect stolen vehicles.

With the capital tie-up with NTT, Toyota has now partnered with all of Japan's three biggest mobile phone carriers, including NTT Docomo.

The automaker owns more than 12 percent in KDDI Corp. and has established a joint venture with SoftBank Corp. over development of self-driving vehicles.

Development of "smart cities" has been accelerating globally, especially in the United States and China.

In such areas, autonomous vehicles provide smooth transport and energy is used efficiently with internet-connected devices tracking real-time consumption of electricity and gas.

Suzuki plans to triple dealerships in India to 9,000: chairman