Fears are also mounting that a downturn in Tokyo shares would darken the economic outlook as well as deteriorate business and consumer sentiment, which would drag down private spending and investment at home.

If security prices continue to fall and domestic demand shrinks in the aftermath of the virus outbreak, the criticism of Abe, who has apparently failed to carry out structural reforms since he took office in December 2012, is certain to increase ahead, investors say.

On Thursday, New York stocks took a sharp dive amid concern over the spread of the new coronavirus that originated late last year in the central Chinese city of Wuhan, with the Dow suffering the largest single-day points drop in its history.

Losses have widened after the U.S. Centers for Disease Control and Prevention underscored the possibility of community spread of the virus earlier this week, although President Donald Trump has argued that the risks posed by the virus remain "very low" in his country. 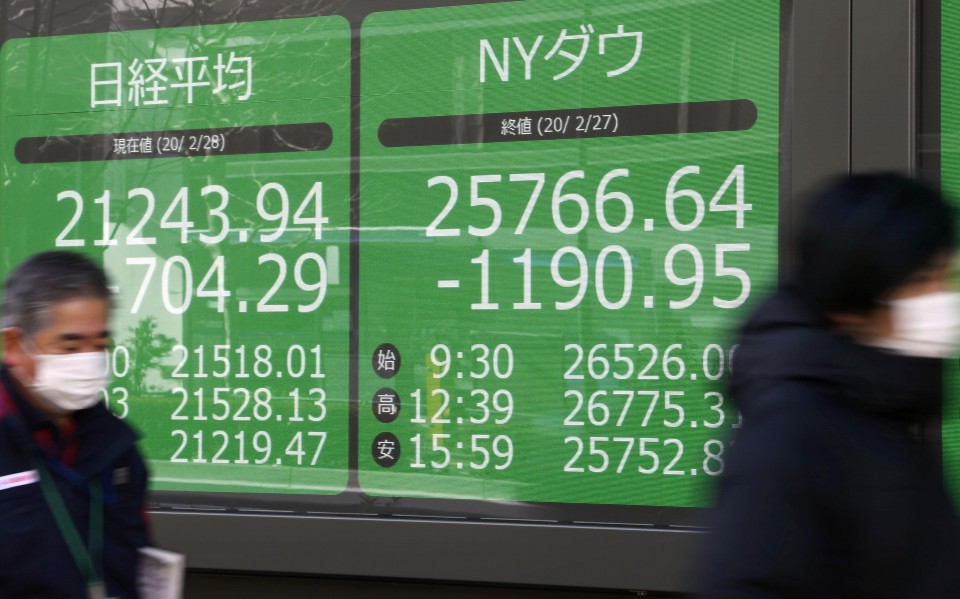 The CDC said one person has been infected in California who reportedly did not have a travel history to virus hotspots or exposure to another known patient with the virus, which causes the disease officially known as COVID-19.

In the wake of a plunge in U.S. shares, Tokyo securities on Friday tumbled in a continued global rout, with panic selling briefly pushing the benchmark Nikkei index down over 1,000 points.

For five business days through Friday, the Nikkei plummeted around 2,200 points, the sharpest decline since a week between Oct. 6 and Oct. 10 in 2008, when the world economy was hit hard by the global financial crisis that started in September that year.

The new coronavirus, which has so far infected about 80,000 people and killed more than 2,500, has expanded to other nations outside China, including Italy, South Korea and Iran, sparking anxiety over a possible pandemic.

Heightening vigilance against a world economic downturn stemming from negative factors such as potential supply chain disruption has brought about a "significant adjustment" in the stock market, Goldman Sachs Asset Management said in a report.

The investment manager, meanwhile, added that falls in U.S. shares may be limited, given that the pace of new infections in China has slowed recently and the virus outbreak could not affect the world's biggest economy much.

The number of newly reported coronavirus infections in mainland China has decreased to its lowest in over a month, up 327 to a total of 78,824, the country's health authorities said Friday. 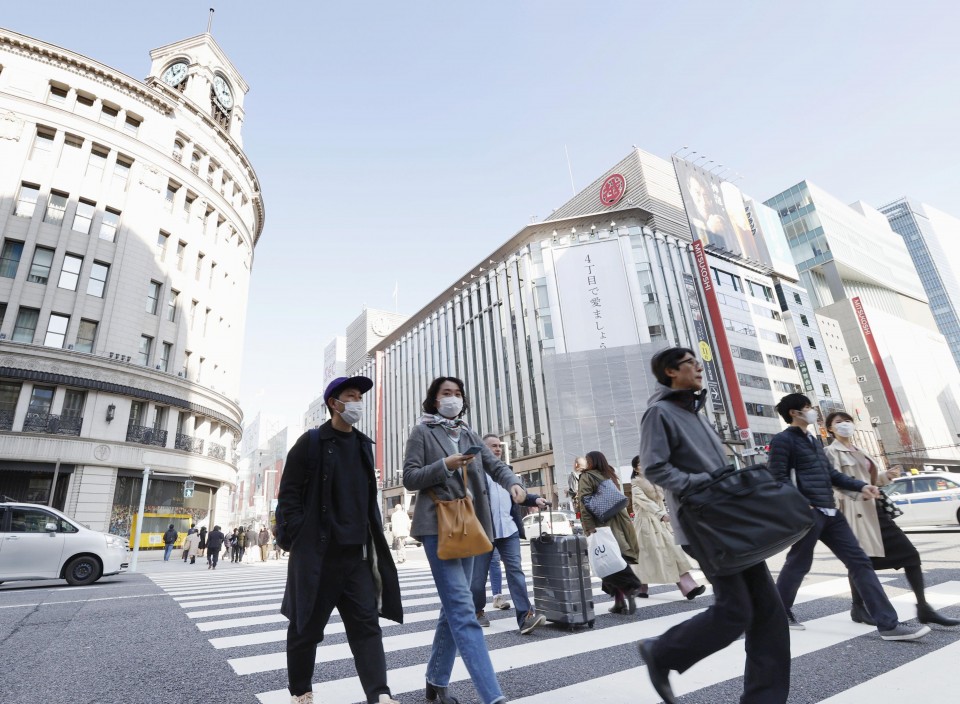 Many market participants, however, have become more pessimistic about the future course of Tokyo stocks, saying that even if the panic surrounding the new virus wanes, Japanese share prices are unlikely to pick up soon.

Aiming to improve corporate and household confidence, Abe has taken measures to drive stocks up for nearly seven years, while effectively urging the government's pension fund to buy securities and calling on the central bank to pursue drastic monetary easing.

The prime minister has also implemented steps that could help devaluate the value of the Japanese yen, in an attempt to bolster the nation's exports, a key engine of economic growth.

Abe has claimed that he has promoted his "Abenomics" policy mix, comprised of drastic monetary easing, massive fiscal spending and a growth strategy, but he has been under scrutiny over his failure to roll out structural reforms to boost domestic demand.

"Even if the worst of the virus passes, we cannot find out a good reason to buy back Japanese stocks," said a trader at a major bank in Tokyo, adding, "Abe has to pay a price for what he has done little to strengthen the fundamentals of the Japanese economy."

"If stocks keep falling, more people may become more reluctant to increase consumption and investment, which could take a toll on the broader economy," the trader said.

Japan's economy, the third biggest in the world, shrank an annualized real 6.3 percent in the October-December quarter, its sharpest slide in more than five years, against a backdrop of a 2-percentage-point consumption tax hike and a devastating typhoon.