Japan adopted a basic policy Tuesday to prevent the spread of the new coronavirus from straining its medical system, calling for more efficient use of hospitals to better treat infected people with serious symptoms.

With a gradual increase in confirmed cases in various parts of the country, besides the hundreds who were quarantined on a cruise ship near Tokyo, Japan is shifting its focus to pre-empt a spike in infections and resulting deaths.

The government maintains there are small groups or "clusters" of infections but that Japan has not seen a large-scale epidemic.

"It is extremely important to slow down the pace of increase in the number of infected people if we are to contain an epidemic in the country," the basic policy said.

The health ministry dispatched a team of infectious disease experts to Hokkaido, at the request of its governor, to analyze the situation in the northern prefecture where dozens of infections were reported. 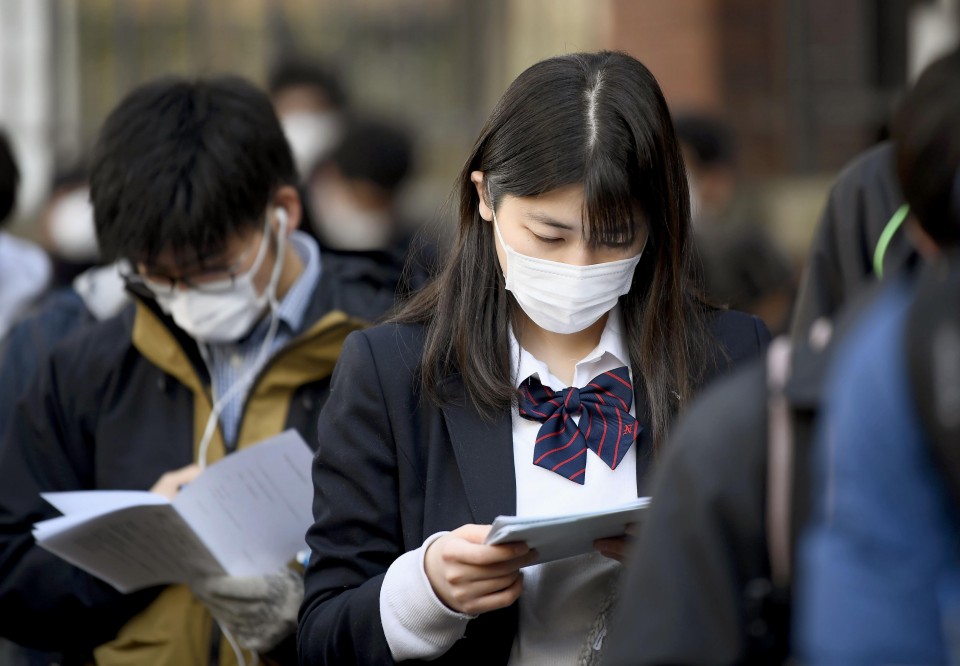 (Students wear masks as they head to the venue of a national university entrance examination in Tokyo on Feb. 25, 2020.)

"We and experts are deeply concerned about the possibility that one cluster will lead to the formation of another cluster and (infections) will expand," health minister Katsunobu Kato told a press conference.

"What we need to do is to block (any link)," Kato said, adding that the cooperation of the Japanese people is necessary to minimize the health impact of the virus.

A government panel of medical experts has said the next week or two will be "critical" in determining whether the pneumonia-causing virus will spread further in Japan. The viral outbreak began in the central Chinese city of Wuhan in December and has spread to nearly 30 countries.

Japan has confirmed over 850 infections, most of them linked to the Diamond Princess cruise ship docked in Yokohama. But the emergence of cases in which infection routes remain unknown has raised concern among health authorities and the public, while in recent days school-age children have tested positive for the virus.

The health ministry said Tuesday a man in his 80s who was on the Diamond Princess has died from pneumonia, bringing the number of deaths among people from the coronavirus-hit vessel to four. He had tested positive for the new coronavirus. 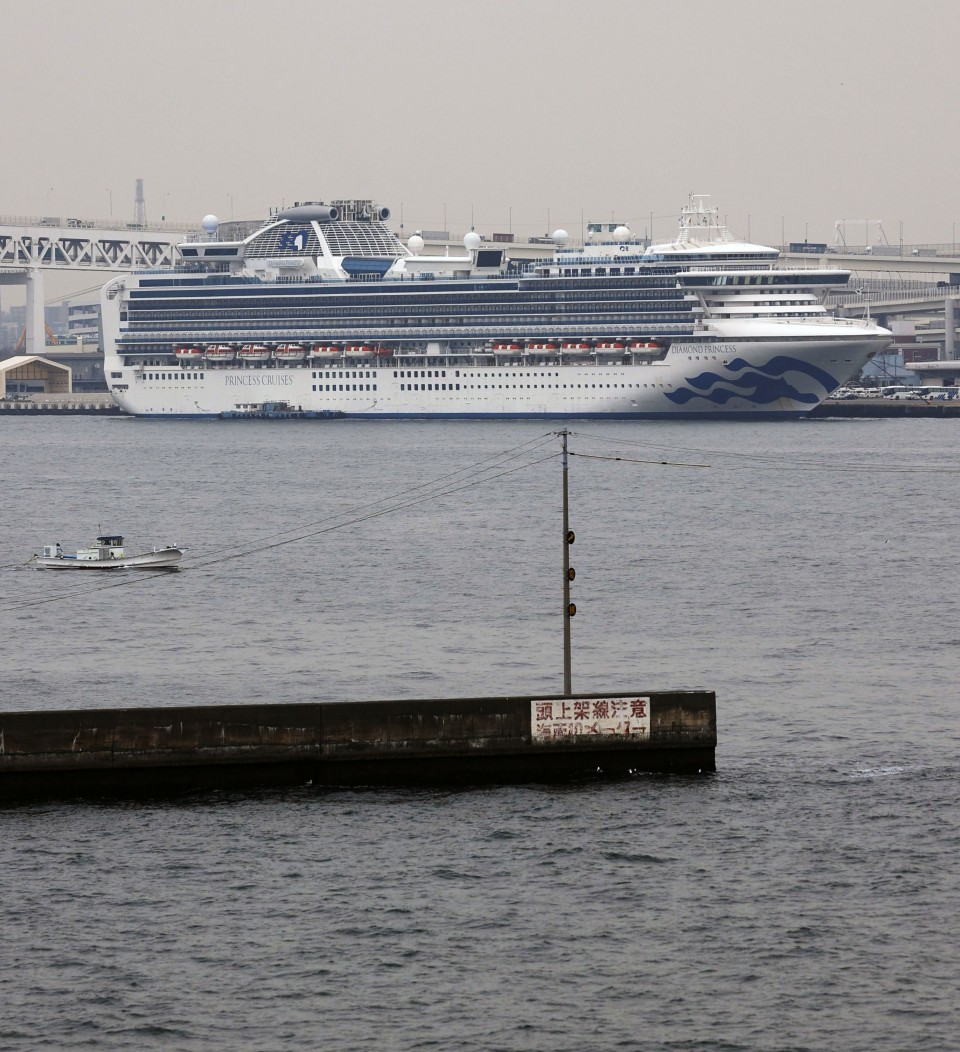 Apart from the ship's passengers, a woman in her 80s from Kanagawa Prefecture infected with the new coronavirus died on Feb. 13.

If a further rise in infections can be prevented or delayed, it will give health care providers more time to make necessary preparations to treat infected patients, the experts said.

The basic policy adopted at a meeting of a government task force on the coronavirus advises people to remain at home and rest instead of rushing to a hospital if they have mild cold-like symptoms.

In areas where infections surge, general hospitals other than those specializing in infectious diseases will be allowed to accept patients suspected of having the virus, according to the policy.

Such hospitals are required to take necessary steps to prevent the spread of infections, such as setting different consultation hours for patients suspected of having the virus.

In the meantime, local authorities are urged to decide which medical institutions should take the lead in admitting infected people with severe symptoms. 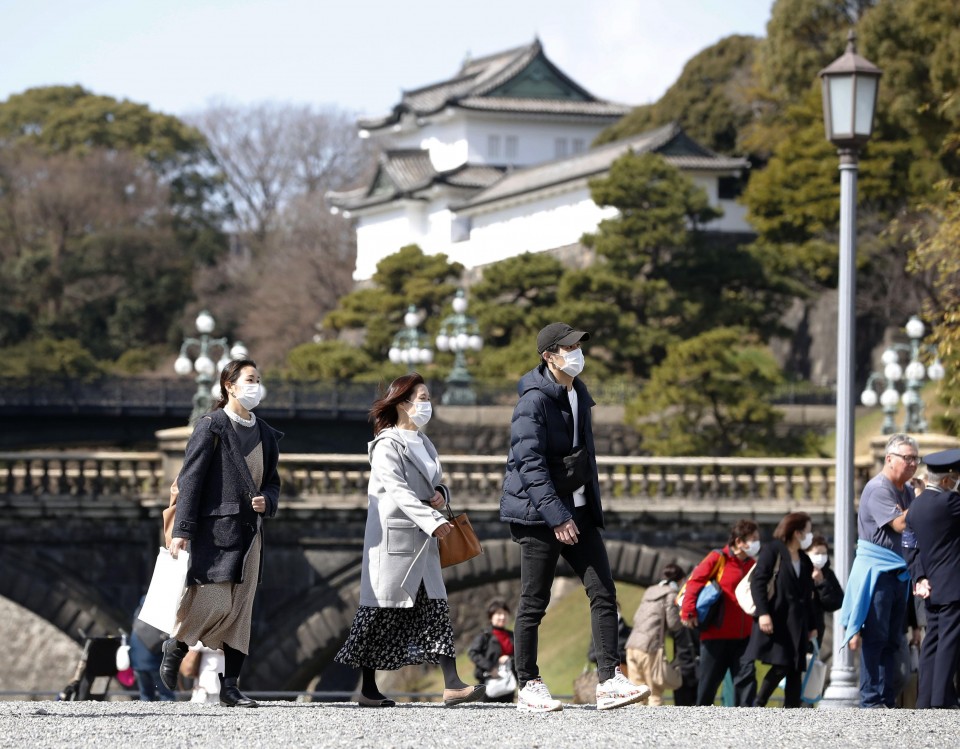 "We will work closely with local governments and medical institutions to have a solid system in place to provide medical care," Prime Minister Shinzo Abe told the task force meeting at his office.

As Japan battles to contain the disease called COVID-19, companies have been urged to promote teleworking and allow employees to commute earlier or later than usual to avoid packed rush-hour trains that raise the risk of infection.

Dentsu Inc., Japan's largest advertising agency, said Tuesday that it will start teleworking the following day for 5,000 employees working at its Tokyo headquarters after an employee in his 50s tested positive. Cosmetic maker Shiseido Co. said around 8,000 of its workers, except for those at retail counters and responsible for production, will work from home from Wednesday to March 6.

Before going to a hospital, people have been advised to first contact local health care centers if they develop a fever of 37.5 C or higher for at least four days. The period is shortened to two days for the elderly, those with chronic diseases, and pregnant women.

Some people do not exhibit symptoms of COVID-19 such as fever and coughing despite having contracted the virus, while the elderly and those with underlying illnesses are at a higher risk of their symptoms worsening.

In the run-up to the Tokyo Olympics and Paralympics this summer, Japan's handling of the quarantined Diamond Princess has come under international scrutiny.

The outbreak has prompted sports and other events to be canceled or postponed as the government is urging organizers to re-examine the need to hold them as scheduled.

The government decided Tuesday to put off the March 15 memorial service arranged by the Cabinet and the Liberal Democratic Party for former Prime Minister Yasuhiro Nakasone, who died in November aged 101.