In handing down the ruling, the court said possession of the drugs MDMA and LSD carries great criminal responsibility. At the same time, Judge Toshifumi Takioka said, "She pleaded guilty and showed remorse. Her doctor and older brother have also offered to support her."

According to the ruling, Sawajiri was in possession of 0.19 gram of powder containing MDMA, 0.6 gram of liquid containing LSD, and a 0.08-gram piece of paper laced with LSD at her home in Tokyo on Nov. 16.

Sawajiri, wearing a black suit, clasped her hands together in front of her, stood straight and nodded several times while listening to the ruling.

After giving the sentence, Takioka told Sawajiri, "I want you to make efforts to recover trust."

"I think my only way to compensate is to do my best to rehabilitate," Sawajiri said in a statement hand-written that was released by her management office. 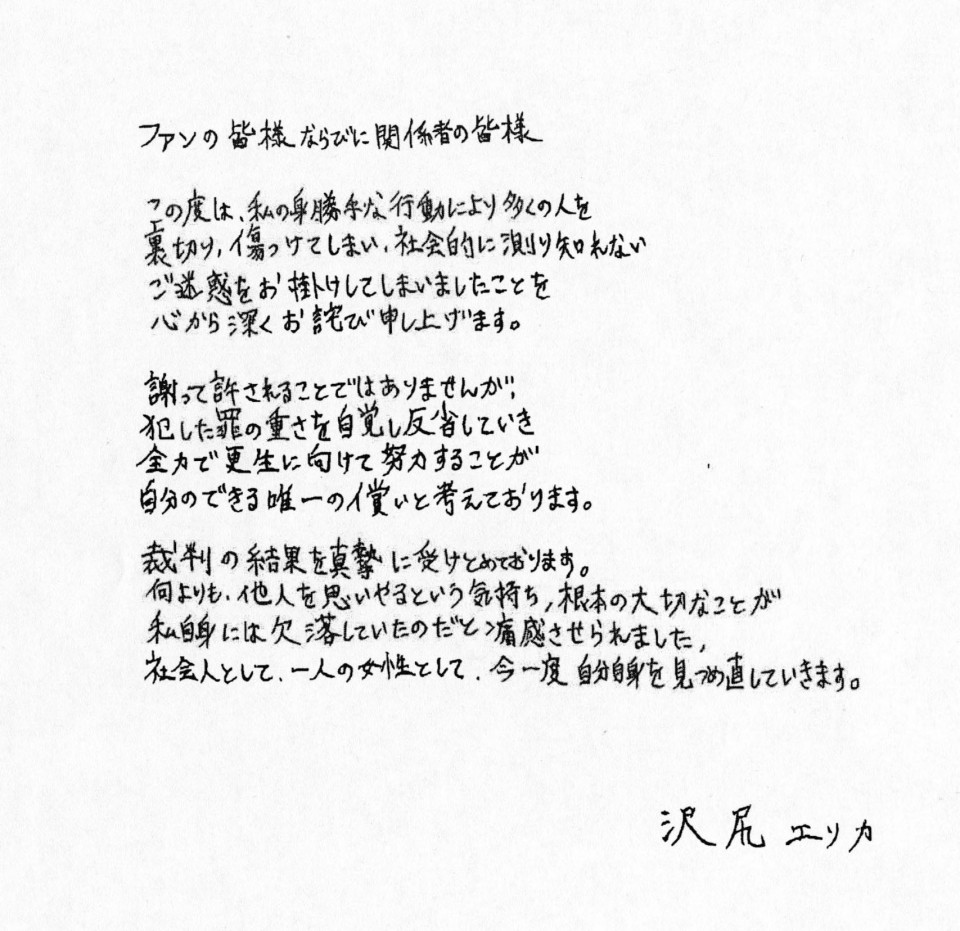 Prosecutors had sought an 18-month prison term for the 33-year-old, who was arrested in November on charges of drug possession, while her defense team asked for a suspended sentence.

In the first hearing of her trial last Friday, Sawajiri offered an apology and said she "does not plan to return to work as an actress."

The prosecutors argued in the trial that Sawajiri had been using illegal drugs since she was around 19 years old, and the likelihood of her committing the same crime is high.

The defense team for Sawajiri, who has appeared in a number of films, TV dramas and commercials, argued that it is unlikely that she will commit similar offenses in the future as she has been receiving medical treatment since being released on bail in December.

A total of 915 people gathered at Hibiya Park in central Tokyo, located near the district court, to draw lots for the 19 public gallery seats available in the courtroom, according to the court.

Sawajiri, who has also had success as a singer, is perhaps best known in other parts of Asia for "1 Litre of Tears," a 2005 TV drama in which she played the heroine suffering from the intractable disease spinocerebellar degeneration.

For her role as an ethnic Korean girl living in Japan in "Pacchigi!" (We Shall Overcome Someday), directed by Kazuyuki Izutsu and released in 2005, she was awarded the best newcomer award at the Japan Academy Film Prize.