The number of interpreters in Japanese courts has fallen in recent years despite growing trials of non-Japanese defendants, as the burden on them is heavy while remuneration is modest.

An interpreter was used during the first hearing of the trial of a Vietnamese man indicted over violation of the immigration law at the Sapporo District Court in November.

"Are the charges written in the indictment correct?" the judge asked.

The man listened through his earphones as the female interpreter spoke into the microphone in Vietnamese.

"They are all correct," he said to the woman.

The criminal procedure law obligates the use of interpreters in court for defendants who do not speak Japanese. Those who wish to become court interpreters must undergo a selection process, including an interview with judges, before being registered on a list managed by the Supreme Court.

Interpreters are then summoned to trials and are given responsibility for translating papers including indictment documents and interpreting in courtrooms. 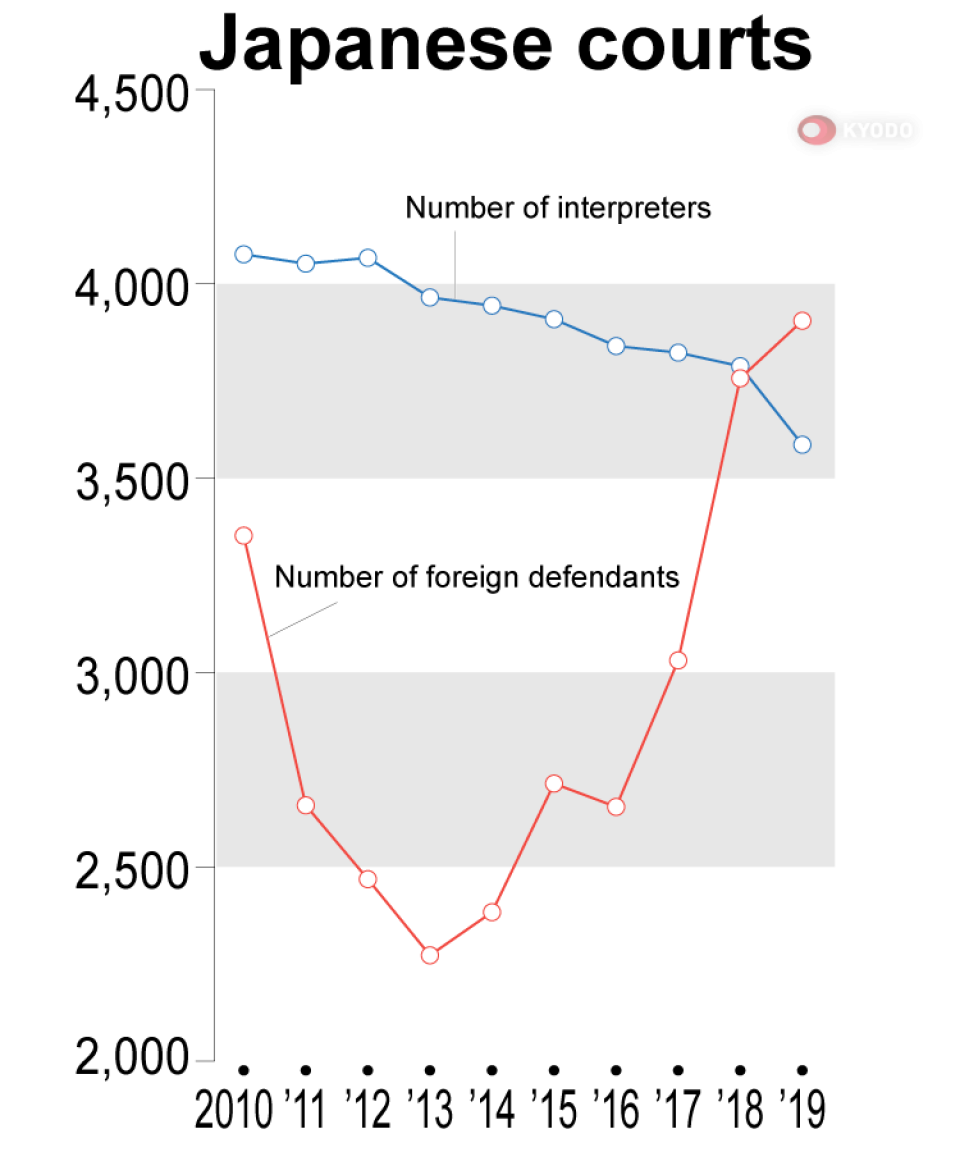 According to the Supreme Court, the number of registered interpreters dropped from 4,076 in 2010 to 3,586 in 2019. Meanwhile, the number of foreign defendants in need of translation, many of whom are accused of violating the immigration law or implicated in theft cases, increased to 3,905 last year, a 1.7-fold jump from six years earlier.

Although the top court does not reveal how much the interpreters are paid, University of Shizuoka professor Sachi Takahata, who has worked as a Tagalog interpreter for over 25 years, says they are usually offered around 15,000 yen ($140) for a hearing that lasts about an hour.

Interpreters are not compensated for the paper translation work they must undertake ahead of the hearing which sometimes takes four to five hours. Furthermore, being a court interpreter is not a stable job as there is no guarantee they will be regularly assigned to a trial.

"If it's a conference, several interpreters will share the job. But you're alone at court," said Rika Yoshida, a Spanish interpreter and part-time instructor at Rikkyo University.

"My ears start ringing when I've been interpreting for a long period of time (in court), and I become more susceptible to making simple errors such as mistaking the yen for the dollar," she added.

About 60 percent of interpreters said they had previously "almost made a translation error" in court, according to a 2017 survey involving about 50 interpreters, conducted by a group of people including Takahata.

About 60 percent were dissatisfied with the pay, saying it is "low compared with the weight of responsibility," and that the "standard for calculating wages was vague." Other complaints referred to difficult terms used by lawyers, judges and prosecutors.

"Court interpreters not only need to be knowledgeable in the language but also need to be educated in legal matters," Takahata said. "We have a grave responsibility as mistranslation could lead to a heavier sentence."

She also says there are few opportunities to practice in-court translation.

"The training programs aren't good enough," she said. "I'd like the courts to review the amount we're paid and start focusing on educating interpreters."