The Malaysian government said Sunday that a woman from the United States who flew to Malaysia after disembarking from a luxury cruise ship in Cambodia last week has tested positive twice for the new coronavirus.

Speaking at a press conference on the virus situation, Deputy Prime Minister Wan Azizah Wan Ismail said that after the first positive result, the authorities performed the test again on the 83-year-old American woman, getting the same result. 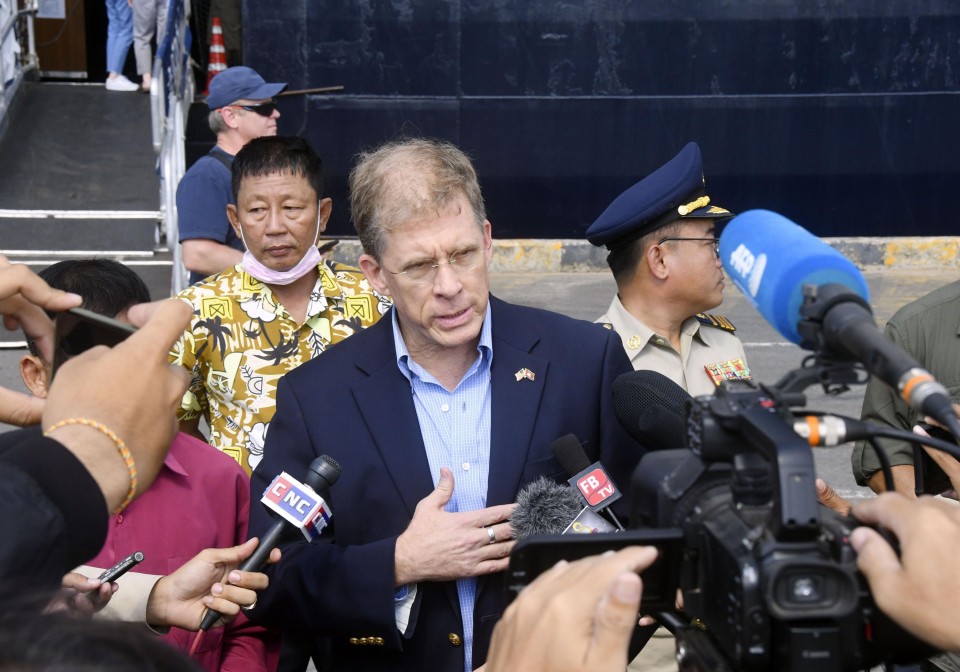 (U.S. Ambassador to Cambodia Patrick Murphy talks to reporters after inspecting the Westerdam cruise ship at the port of Sihanoukville, Cambodia, on Feb. 15, 2020.)

She added that Cambodia, upon being shown the results, "agreed that our protocol is actually world class. So, whatever we did was right."

Noor Hisham Abdullah, the Health Ministry director general, on Saturday night disclosed that the woman, who arrived in Malaysia the previous day on a charter flight from Cambodia, had contracted the new coronavirus.

Cambodia, which has come under scrutiny after its health authorities allowed nearly 1,500 passengers and crew to disembark from the ship, later Saturday requested that the test be retaken.

Before giving the green light to the Westerdam to dock on Thursday, the Cambodian health authorities collected samples from 20 passengers who had been ill. All tested negative.

U.S.-based Holland America Line, the ship's operator which in recent days insisted there were no suspected cases of virus infection on board, also sought more tests.

"While the first results have been reported, they are preliminary at this point and we are awaiting secondary testing for confirmation," it said in a statement earlier Sunday.

Azizah noted that Cambodia only tested 20 passengers on board before declaring the ship free of the virus.

"We do not want to dispute (that) but when the passengers came over here, we have to take precautions. For Cambodia, they did what they believe was enough," she said.

The woman and her 85-year old husband, also from the United States, were among 145 passengers that flew out of Sihanoukville, Cambodia, where the ship docked, to Kuala Lumpur on Friday. The other 260 passengers who disembarked that day flew to the Cambodian capital Phnom Penh to take connecting flights home.

Thermal scanners at the airport picked out the couple as having "symptoms" and they were sent to a hospital in the outskirts of Kuala Lumpur, the Health Ministry's Hisham said Saturday.

Two tests performed 12 hours apart for the virus, which causes the disease now officially known as COVID-19, both came back positive for the woman. Her husband, who Azizah said is "not doing very well," tested negative and is being treated for his symptoms.

The flight the couple was on was the first of four Malaysia Airlines flights specially chartered by the ship's operator to bring Westerdam passengers to Kuala Lumpur, from where they were supposed to take connecting flights home.

Following the positive test result, Azizah said the three remaining flights have been cancelled as the Malaysian government has decided that the remaining passengers left in Cambodia will not be allowed to enter the country since they have been in close contact with the patient.

So far, out of the 143 other passengers who arrived in Kuala Lumpur on Friday, 137 that cleared the airport screening already left for other destinations on commercial flights.

The six remaining travelers have been placed in quarantine and samples have been taken for further analysis. If the results are negative, Azizah said they will be allowed to leave the country.

She also said that the government has also decided to ban all cruise ships from entering Malaysia that depart or transit from any ports in China.

The Westerdam, carrying 1,455 passengers and 802 crew, departed Hong Kong on Feb. 1 for a 14-day East Asia cruise that was to end in Yokohama. However, the Japanese government denied entry based on suspicions that one of the passengers was infected with the virus.

It was subsequently turned away by other countries in Asia over similar fears before the Cambodian government allowed the ship to dock on Thursday on humanitarian grounds.

Cambodian Prime Minister Hun Sen even greeted the first batch of passengers with handshakes and bouquets as they disembarked on Friday morning.

In addition to the 405 passengers who stepped off the ship on Friday, another 769 passengers, including four Japanese, and 66 crew did so on Saturday. About 240 passengers and 750 crew, including one Japanese, remain on the vessel, and it is unclear when they will disembark.

With the latest case, the total number of the coronavirus infections in Malaysia rose to 22, including 15 Chinese nationals and six Malaysians.