What sort of image do you have about the country called Kazakhstan? Is it a Central Asian country, the Silk Road, nomadic people, or a country rich in natural resources such as oil and gas? Many people may answer that they cannot think of any clear image. But please look at this photo. It shows amazing landscapes -- a neo-futuristic city as depicted in a movie, breathtakingly beautiful nature, and more. People who already had a clear image and those who did not must have completely different impressions. As a result, we were prompted to take a look at Kazakhstan, a country which the more you know, the more interesting you will find it.

You can see on a map that the country is sandwiched between the Caspian Sea, the world’s largest lake, in the west and the Altai Mountains on its eastern side. The Caspian Sea is known as being home to 90% of all sturgeon species, whose eggs are processed into caviar, a high-end product. Kazakhstan’s land size is the world’s seventh largest. The country has developed rapidly, taking advantage of its rich crude oil and other natural resources, since it split off from the defunct Soviet Union in 1991 to become an independent nation.

Kazakhstan has a close relationship with Japan. A direct flight service was launched between the two countries in 2019. Kazakhstan’s first president, Mr. Nursultan Nazarbayev, who ruled the country for nearly 30 years since the closing days of the Soviet era, was among members of the country’s delegation that participated in Japanese Emperor Naruhito’s enthronement ceremony held in Tokyo that year. And a noted Japanese architect took on the duty of designing Kazakhstan’s capital city. 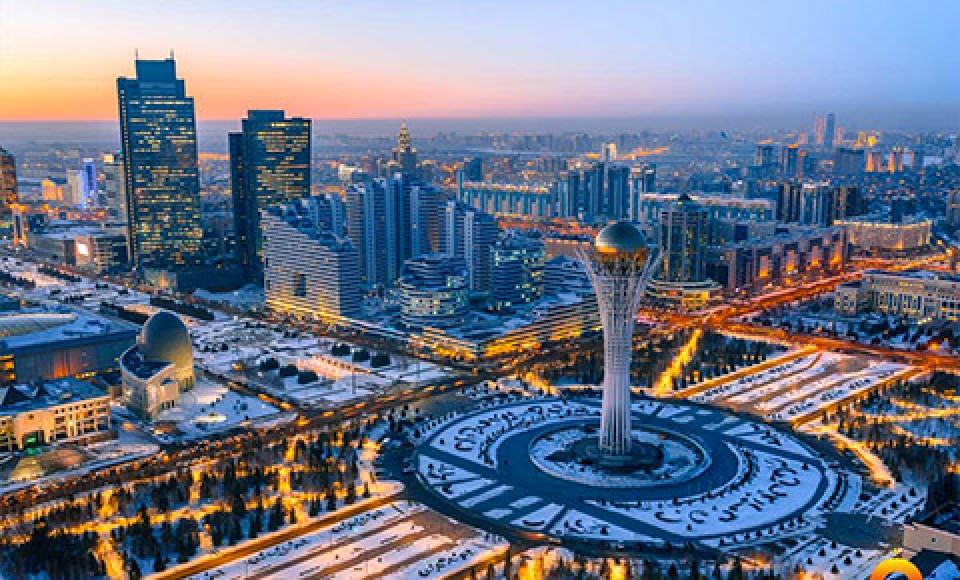 Nur-Sultan, known until recently as Astana, became Kazakhstan’s new capital in a 1997 relocation. Astana was renamed Nur-Sultan in March 2019 in honor of the departing president. It was a junction of the Silk Road from ancient times. Its population has ballooned since the capital relocation. In 2017, the city hosted an international exposition under the theme of “Future Energy.”

The Japanese architect who won a design competition in 1998 and undertook city planning for the capital was the late Kisho Kurokawa. He is known for designing numerous prominent buildings such as the “National Art Center, Tokyo.” In planning the new capital, the Kazakhstan authorities, conscious of preserving biodiversity, reportedly sought to enhance coexistence between humankind and the natural environment as well as other living creatures. The capital’s international airport building is also based on Mr. Kurokawa’s design.

The streets in Nur-Sultan are packed with a wide variety of architectural structures such as shopping malls and huge mosques, as well as cultural facilities like opera houses and museums. Particularly notable among them is the Bayterek Tower. The monument and observation tower frequently appears in guidebooks and websites introducing Nur-Sultan. Located in the capital’s new town in the heart of the city center, it is a symbolic tower commanding a 360-degree panoramic view of the city from an observation deck. Bayterek, meaning “poplar” in the Kazakh language, is designed based on the legend of a sacred eagle that laid a golden egg on a bayterek. Nur-Sultan is lined with other magnificent buildings, including the National Museum of Kazakhstan and the Palace of Peace and Reconciliation commonly called “the pyramid.” These buildings are lit up at night, enabling visitors to enjoy beautiful nocturnal scenes.

Exchange projects are underway between the National Museum of Kazakhstan and the Nara National Research Institute for Cultural Properties of Japan. The projects are intended to have experts from both countries bring their knowledge and techniques together, with the aim of protecting their cultural assets. They are studying methods of digitalizing information on cultural properties and of conducting scientific investigations into archeological remains. 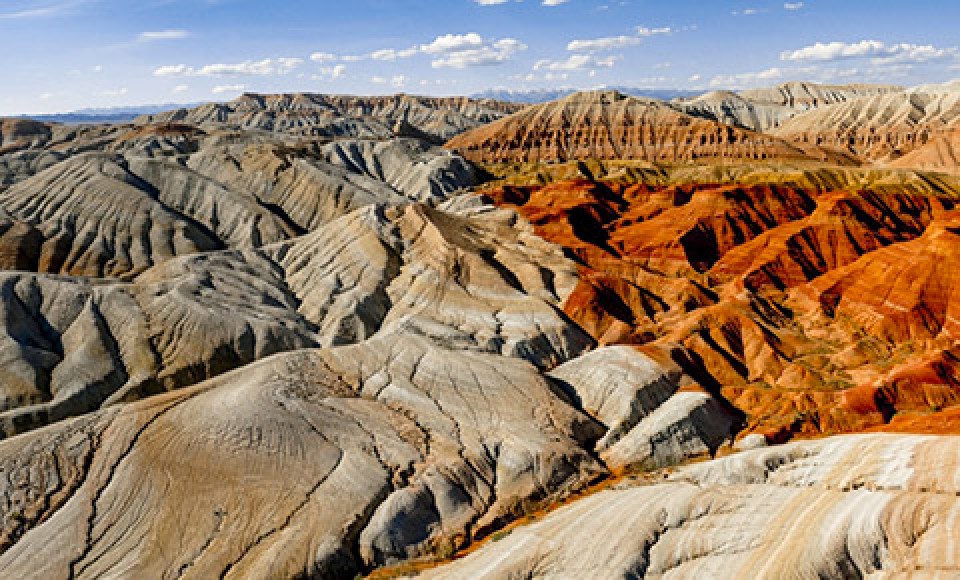 Magnificent natural scenery unique to Central Asia is another allure of Kazakhstan. Known for its picturesque beauty is Altyn-Emel National Park. It is a widespread area stretching some 260 kilometers, situated in the country’s southeastern part. The extensive park constitutes part of a World Heritage site listed by the United Nations Educational, Scientific and Cultural Organization (UNESCO). What captivates visitors is its broad array of varied landscapes such as deserts, rocky mountains and canyons.

Desert mountains which might remind visitors of landscapes in Sci-Fi movies owe their colors -- white, red and orange -- to their layers of clay. The desert area is known as the “singing dunes” where westerly winds disperse the sands, causing desert hills to play organ-like tunes. Sands produce mythic vibrations amid a hot, dry climate.

Also observed are precious flora and fauna. There are about 20 endangered plant species listed on the red data book. The park is also believed to be home to some 50 rare animal species, including endangered amphibians such as the Siberian toad, birds like storks and imperial eagles, and mammals such as the manul species of cats, gazelles, argali (wild sheep), and lynx.

The park is so spacious that it reportedly takes three days to view all of it. Visitors require special permission. If you are to visit Kazakhstan, which has a continental climate featuring cold winters and hot summers, you are advised to do so in April-June or August-October when the weather is relatively mild. There is a direct flight service to/from Japan by Kazakhstan’s SCAT Airlines. It takes about seven hours from Nur-Sultan to Narita airport and about eight hours from Narita to Nur-Sultan. Various events are scheduled for 2020, including those commemorating the 175th anniversary of the birth of Abai Qunanbaiuly, Kazakhstan’s national hero and poet, and the 1,150th (!) anniversary of ninth-century philosopher Al-Farabi’s birth. So, 2020 may be a pertinent year for your visit. 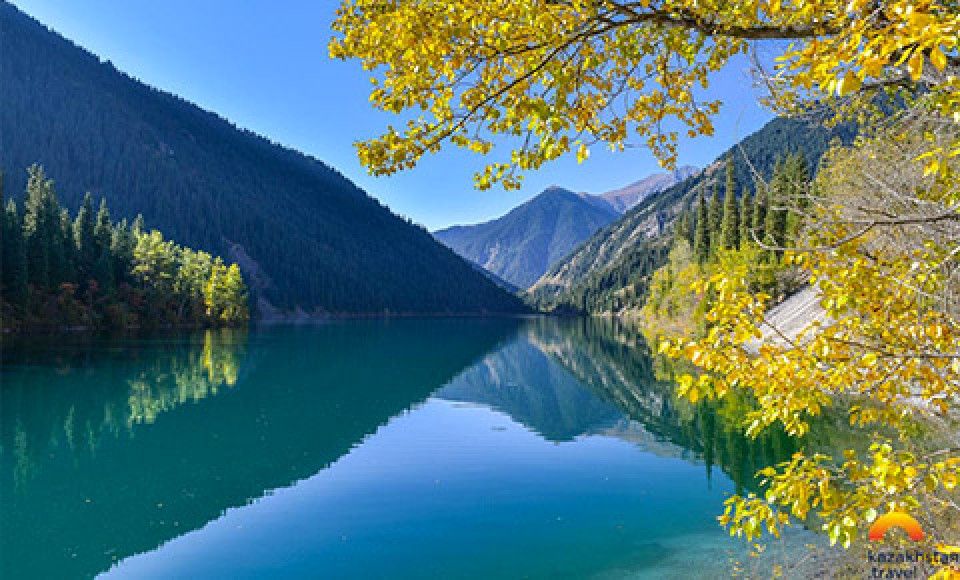 Japanese companies foraying into Kazakhstan are increasing as the country constitutes a strategic railway transport link connecting East Asia and Europe. “Kazakhstan is an important hub of traffic, through which 70% of central European railway cargo passes, and a gateway to Europe and Central Asia,” explains Mr. Tatsuo Fukushima, who heads the network business headquarters in East Asia of Nippon Express Co. The company set up a representative office in Almaty in August 2019. Its purpose was the collection of information and local marketing research. The company is seeking to verify Kazakhstan’s future commercial possibilities and eventually expand business between East Asia and Europe. “Kazakhstan is economically stable in Central Asia and a safe country. It has a deep relationship with Japan from ancient times and, in recent years, has close economic ties with China as well. The Kazakh government is interested in the establishment of our office. We expect to use international railway transport as a stepping stone to the development of multimodal transport services combining related logistics, as well as trucking and airlifting,” says Mr. Fukushima. “Vast land and clear air are attractive. With the service industry well developed, too, you can live a relatively comfortable life. This is a country valuing family ties and, even outside the family framework, you can get along with others in a family-like manner once you become familiar with them.”

Kazakhstan is also a country enthusiastic about winter sports. In 2011, the Asian Winter Games were held in Almaty and Astana (as so called then). In bidding for the 2022 Winter Olympics, Almaty lost to Beijing by a small margin after competing with the Chinese city to the last minute. Denis Ten (who died in 2018), a rival of Japanese men’s figure skating star Yuzuru Hanyu, was the most popular athlete in Kazakhstan. The country will also not be forgotten by Japanese soccer fans. In October 1997 when Japan was battling in Asia’s preliminary round to qualify for its first World Cup, a late equalizer by Kazakhstan in their game in Almaty led to the sudden sacking of the Japanese coach -- a ruthless change of leadership that had never been seen in Japan’s sports community.

Envoy to Japan: “Want to deepen friendly ties in every field” 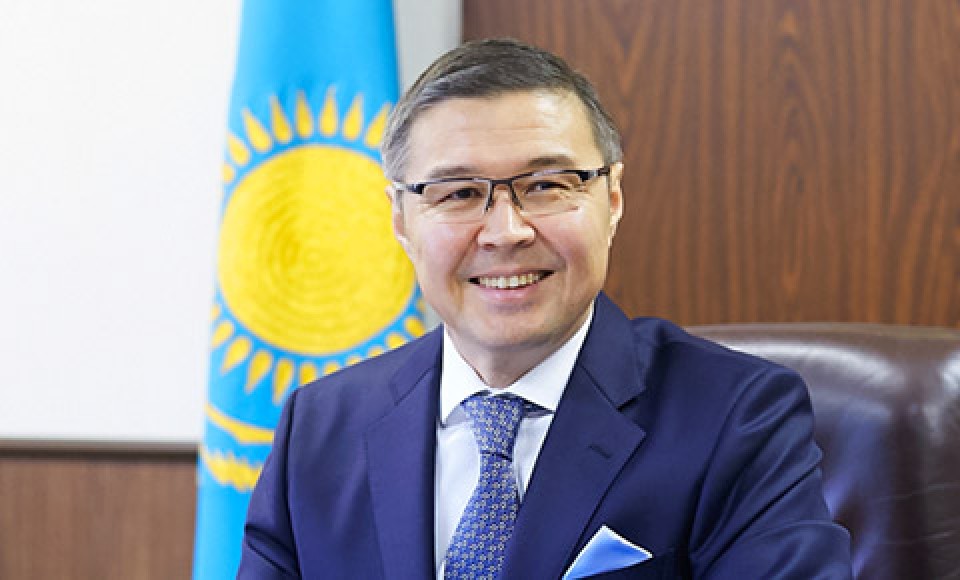 We interviewed Ambassador to Japan Yerlan Baudarbek-Kozhatayev about economic conditions of his ever-developing country and relations between Kazakhstan and Japan.

“Kazakhstan saw its gross domestic product (GDP) grow 4.4% in 2019. International rankings attest to an improved business environment in the country. In the World Bank’s Doing Business 2020 report, my country rose by three ranks to 25th due to improvement in permit issuance, and greater ease in obtaining loans and launching business. This position in the World Bank’s Doing Business rating was realized by reform of existing laws, improvement in the licensing system, simplification of the business startup process, and the government’s continued systematic work aimed at optimizing management by the government. Moreover, in the Global Competitiveness Index announced by the World Economic Forum on Oct. 9, 2019, Kazakhstan climbed by four places to 55th among 141 countries listed.”

“I would like to emphasize the role of the Astana International Financial Center (AIFC) in contributing to creating a favorable business environment. AIFC has laid down its own law by not only preparing necessary infrastructure but also adopting about 70 rules regarding general applications and financial regulations. The number of companies registered with the AIFC regulatory authorities has increased to 235 (from 26 countries, including the United States, Britain, Switzerland, China and Hong Kong). At the Astana International Exchange (AIX) launched in November 2018, capital in excess of US$70 million was raised in less than a year, bringing the gross capital of AIX to about US$2 billion. As part of digitalization, an eJustice online dispute settlement system peculiar to this region went into operation early this year, enabling parties to electronically file lawsuits with the AIFC Court from anywhere in the world.”

“In 2019, Kazakhstan and Japan continued the development of their bilateral relationship of ‘expanded strategic partnership.’ The two countries continued to maintain forward dynamics for trade and economic cooperation, and bilateral trade turnover reached US$2 billion in 2018. Total Japanese investment in the Kazakh economy exceeded US$7 billion.

Furthermore, Kazakhstan and Japan share the common challenge of pursuing a world without nuclear arms. On Sept. 19, 2019, a conference titled “Kazakhstan and Japan: Path toward a world without nuclear weapons” was held at the United Nations University in Tokyo. Mr. Karipbek Kuyukov, a Kazakh activist for nuclear nonproliferation and honorary ambassador to the Atom Project, has published paintings depicting the horrors of nuclear arms testing and use.”

Referring to the participation of Mr. Nazarbayev, Kazakhstan’s first president, in the Japanese emperor’s enthronement ceremony in October 2019, Ambassador Kozhatayev said, “The participation of our first president, who was at the forefront of bilateral cooperation, demonstrates Kazakhstan’s will to further deepen the friendly relationship with Japan in every field.” Likewise, Japanese Prime Minister Shinzo Abe sent a personal letter at the time of current Kazakh President Kassym-Jomart Tokayev’s inauguration in March 2019, in which he said, “We welcome the further deepening of relations between the two countries through mutual visits of VIPs, expansion of cooperation in economic and business areas, progress in cultural exchanges, and so on.” Why not get to know Kazakhstan better, as it is likely to be even closer to us in the future?