Hakuba, a northern Japan Alps village at the foot of some of the country's most popular ski resorts, has a problem: global warming could leave the area without the powder snow that has long been its lifeblood.

Famed for its abundant "J-Pow," as the fluffy stuff is affectionately known by those who seek out waist-deep descents, the site of a number of the 1998 Olympics skiing events is experiencing a winter so warm that snow is thin on the ground.

In response, local high school students, parents and children, civic groups, and ski resort workers are doing their part to raise awareness about climate change and its impact on the area's plight, while promoting renewable energy with an eye on creating the sustainable ski resorts of the future.

In early February, high school students carved down the mountains on skis and snowboards while holding placards aloft with messages, such as, "I hope to have a Hakuba where I can still ski as an adult."

The Feb. 2 event was the region's small-scale contribution to the September 2019 climate strikes, which, thanks to the efforts of young activists like Sweden's Greta Thunberg, saw protests demanding action on climate change conducted across 4,500 locations and 150 countries worldwide.

Keisuke Tezuka, 17, a sophomore attending Hakuba High School, planned the activity with several of his classmates to draw attention to the climate crisis in Japan, a country that has become an international emissions pariah to the extent that its lack of action and concern led it to be named "Fossil of the Day" by the Climate Action Network during the COP25 conference in Madrid in late 2019. 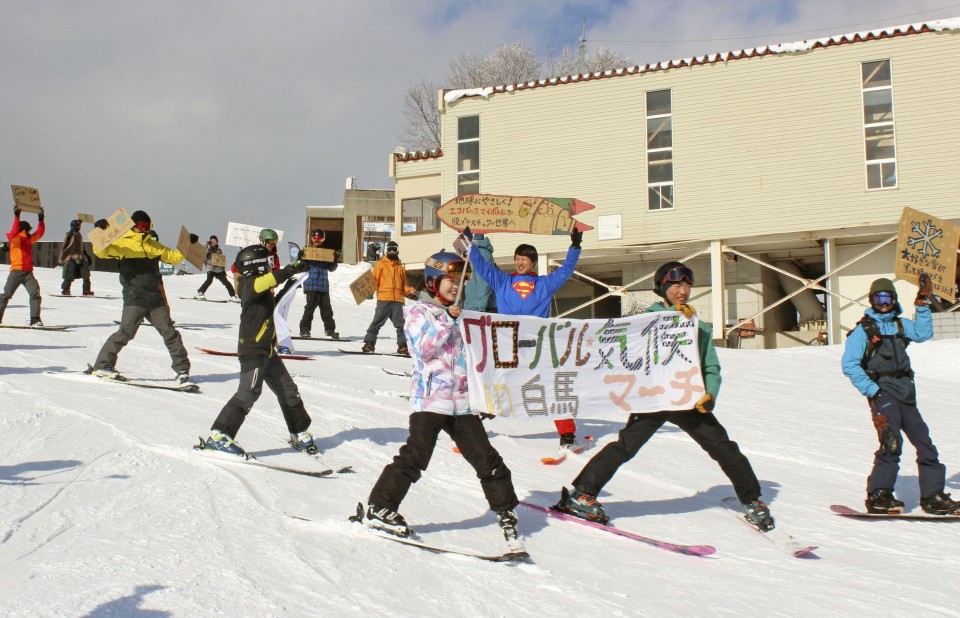 "(The situation) makes me sad, but I want to do all I can to help," said Tezuka, who came from outside Hakuba village to enroll in the local high school.

This winter, ski resorts nationwide are suffering from a severe lack of snow.

According to Weathernews Inc., a weather information company based in Chiba, outside Tokyo, more than 30 percent of 385 ski resorts surveyed nationwide had not opened due to lack of snow as of Jan. 30. Around 10 percent of those polled remained closed as of Feb. 10.

Hakuba is in a similar boat. On the day of the climate strike, only a thin layer of snow covered the foot of the mountain, and the ground lay bare in several spots.

In a normal season, the streets of Hakuba are piled with snow, and the surrounding mountains receive an average of 11 meters of falls annually.

According to Nagano Prefecture, between Dec. 27 and Jan. 5, there were 740,000 visitors to 49 of the main ski resorts in the region, a 7.5 percent drop from the previous year.

Hinano Miyasaka, 17, and Nao Kaneko, 16, who both also took part in the protest, said they hoped more people will understand that climate change is a major factor in Japan's lack of snow this season, and that it is a sign of things to come.

President of Hakuba Resort Development Co. Ltd., Yutaka Wada, 43, is sympathetic to the students' cause both from personal and professional perspectives as his company operates the large Happo One resort in Hakuba.

As part of his company's effort to support the United Nations' Sustainable Development Goals, he aims to switch to renewable energy power sources and reduce fuel and power used in snow-making machines and snowcats, he said.

The SDGs are a collection of global ambitions designed to be a "blueprint for achieving a more sustainable future for all."

"For a business that isn't even possible without snow, we place a heavy burden on nature. I hope to find a way to escape this conflict," said Wada.

Protect Our Winters Japan, the Japanese branch of the nonprofit environmental group of the same name that aims to change outdoor enthusiasts into climate advocates through legislative action, conducts its activities mainly in the Hakuba area.

According to its secretary-general Shotaro Takada, 34, many ski resorts in Europe and the United States have specialized departments dedicated to sustainability for tackling environmental issues, and there is a high level of interest from customers. Several ski resorts have taken up the challenge of reducing greenhouse gas emissions. 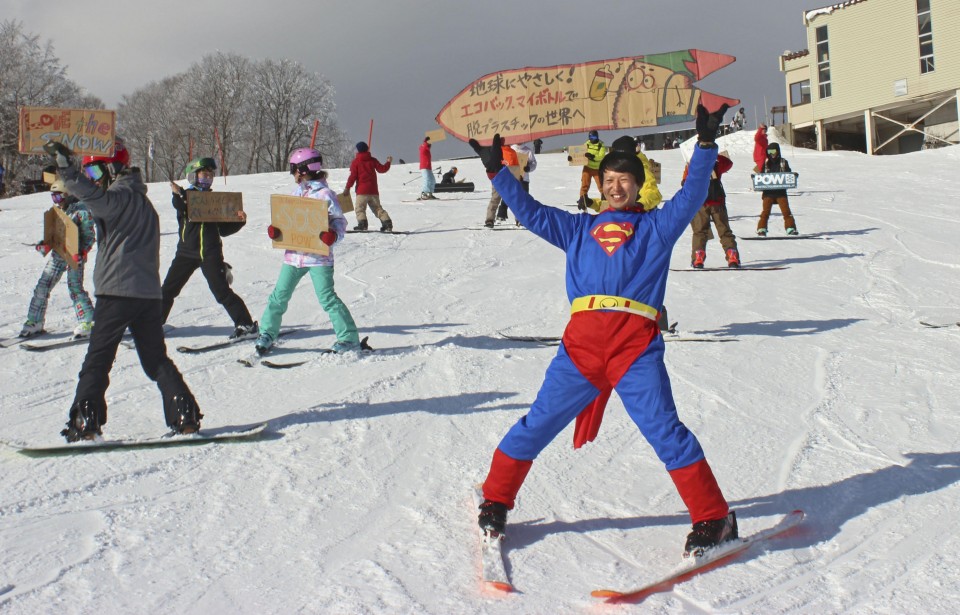 "We want to make the Hakuba area a model and widen policy efforts at ski resorts around the nation to combat climate change," Takada said.

Despite these admirable intentions, the efforts of small mountain communities will prove little more than symbolic unless Japan addresses the level of its overall climate change-causing emissions, particularly from power generation.

As of 2017, Japan's generated 39.8 percent of its energy from liquefied natural gas, 32.3 percent from coal and 8.7 percent from oil. Renewables accounted for just 8.1 percent, hydroelectric sources 8 percent, and 3.1 percent came from nuclear, according to nippon.com.

Japan's reliance on fossil fuels has increased since the 2011 Fukushima nuclear disaster, with most of the nation's nuclear power plants remaining idle.

If Japan, the world's third-largest economy, is to make serious inroads into pulling its climate change-causing emissions reduction weight, then a wide-scale shift away from fossil fuels is required.

However, despite mounting international criticism, Japan has been promoting coal-fired power projects -- which are significant contributors to global warming -- at home and abroad, and providing backing to projects in developing countries.

In a speech at the COP25 conference, Japan's Environment Minister Shinjiro Koizumi said, "Of course, I am aware of global criticism, including on our coal-related policies."

He said that he took U.N. Secretary General Antonio Guterres' call to end "our addiction to coal" as a message to Japan.

"A growing number of people in Japan, including myself, believe further climate action must be taken," Koizumi said, adding that Japan is "taking concrete actions towards decarbonization" but they are "overshadowed by the criticism on our coal policy."

Given many tip Koizumi as a future prime minister, his words may inspire hope, but communities like Hakuba need local and global action immediately if their future prospects are to be secured.