Donald Trump was acquitted Wednesday in the third-ever impeachment trial of a U.S. president by the Senate, after facing accusations of pressuring a foreign country to investigate a key political rival in the run-up to November's presidential election.

The Republican-controlled Senate voted against two articles of impeachment brought against Trump -- abuse of power and obstruction of Congress during its inquiry -- ending nearly five months of related proceedings.

Trump tweeted that he will make a public statement Thursday noon to discuss "our Country's VICTORY on the Impeachment Hoax!"

The White House said, in a statement, that the process initiated by the Democratic-dominated House of Representatives was "corrupt" and that the president "is pleased to put this latest chapter of shameful behavior by the Democrats in the past," and looks forward to continuing his work in 2020 and beyond.

While three U.S. presidents -- including Andrew Johnson in 1868 and Bill Clinton in 1998 -- have been impeached by the House, none has been removed from office as a direct result of the process.

A two-thirds majority at the 100-member Senate would have been required for Trump's conviction and removal. But senators voted 52-48 against the abuse of power charge, with only one Republican -- Mitt Romney -- crossing party lines. 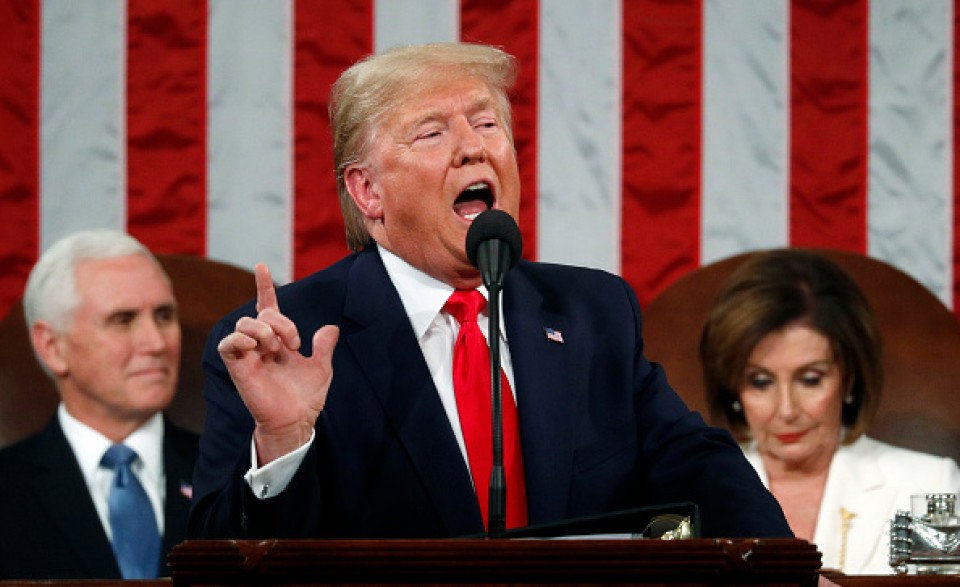 They also acquitted Trump of obstruction of Congress by 53-47.

The public has been divided over whether to remove the president through an impeachment trial, even as many people considered his behavior wrong, according to polls.

At the heart of the dispute was a July phone call between Trump and Ukrainian President Volodymyr Zelenskyy, in which, according to a White House transcript, Trump asked Zelenskyy to "do us a favor."

The Ukraine leader was also told to look into some "horrible" information he heard about former Vice President Joe Biden and his son, who had sat on the board of a purportedly corrupt Ukrainian energy company.

Biden, who served under former President Barack Obama, has been one of the frontrunners in the race for the Democratic presidential nomination.

Following a whistleblower report about the phone call, House Democrats launched an impeachment inquiry last September and concluded Trump used the power of his office to pressure Ukraine to announce investigations into the Bidens.

The U.S. president allegedly used a congressionally approved package of $391 million in military aid to Kiev, which faces aggression from Russia, and a White House meeting with Zelenskyy, who was sworn in last May, as leverage to solicit foreign interference.

During the trial, Trump's defense team denied any misconduct by the president.

The lawyers argued there has been no direct evidence that Trump linked the aid to any investigation, and that the case rests almost entirely on the "presumptions" of a key U.S. diplomat, and speculation from others who testified in the House.

The military aid was eventually released to Ukraine without it announcing investigations of the type Trump supposedly requested. Zelenskyy has told media he was not pressured by Trump to carry out the investigations.

A group of House Democrats, serving as prosecutors, sought to call new witnesses such as former National Security Adviser John Bolton, amid expectations he could offer details from before he was fired by Trump in September over disagreements on foreign policy.

But the Senate last Friday voted down considering any motion to subpoena witnesses and documents, setting the stage for the Senate to wrap up a trial that began on Jan. 16.

As for the charge of obstruction of Congress, the House Democrats said Trump directed administration officials to defy every subpoena issued in the impeachment investigation by the House.

Trump's lawyers insisted the president acted properly on advice from the Justice Department, and blamed the refusal to comply with some subpoenas on what they see as a lack of authorization from the House, which initially launched an investigation without a vote.

The launch of the impeachment inquiry was announced by Democrat House Speaker Nancy Pelosi before the House passed a resolution in October to set ground rules for an inquiry process.

Following the Senate impeachment vote, Pelosi denounced the Republicans for not agreeing to call witnesses and insisted that House Democrats were able to prove the president's guilt through "overwhelming" evidence.

"The president will boast that he has been acquitted. There can be no acquittal without a trial, and there is no trial without witnesses, documents and evidence," she said.

"By suppressing the evidence and rejecting the most basic elements of a fair judicial process, the Republican Senate made themselves willing accomplices to the president's cover-up."

In 1998, Clinton was charged with obstructing justice and lying under oath about his extramarital affair with a White House intern.

Richard Nixon, facing likely impeachment over his role in covering up the Watergate scandal, resigned in 1974 before the House could vote on the articles of impeachment against him.

The following is a chronology of major events under U.S. President Donald Trump's administration.

Dec. 6 -- Trump announces recognition of Jerusalem as the capital of Israel.

Sept. 24 -- U.S. House announces the launch of an impeachment inquiry into Trump.