Japan's health ministry issued guidance Monday for when people with symptoms consistent with the new coronavirus should consult medical institutions, as the country steps up efforts to contain its spread with more cases, even among medical staff, confirmed.

The ministry is now encouraging people who have had a temperature of 37.5 C or higher for four days, are feeling lethargic or are experiencing shortness of breath to contact by phone nationwide health-care centers in charge of responding to the outbreak.

The centers will then recommend medical institutions they should visit. The period is shorter at two days for the elderly and those with underlying conditions such as diabetes, as they are viewed as more vulnerable to the pneumonia-causing virus, the Ministry of Health, Labor and Welfare said.

The guidance is intended to give those worried about contracting the virus an idea of when and where to go to a doctor while a government panel of experts has said the country is at an early stage of infection. 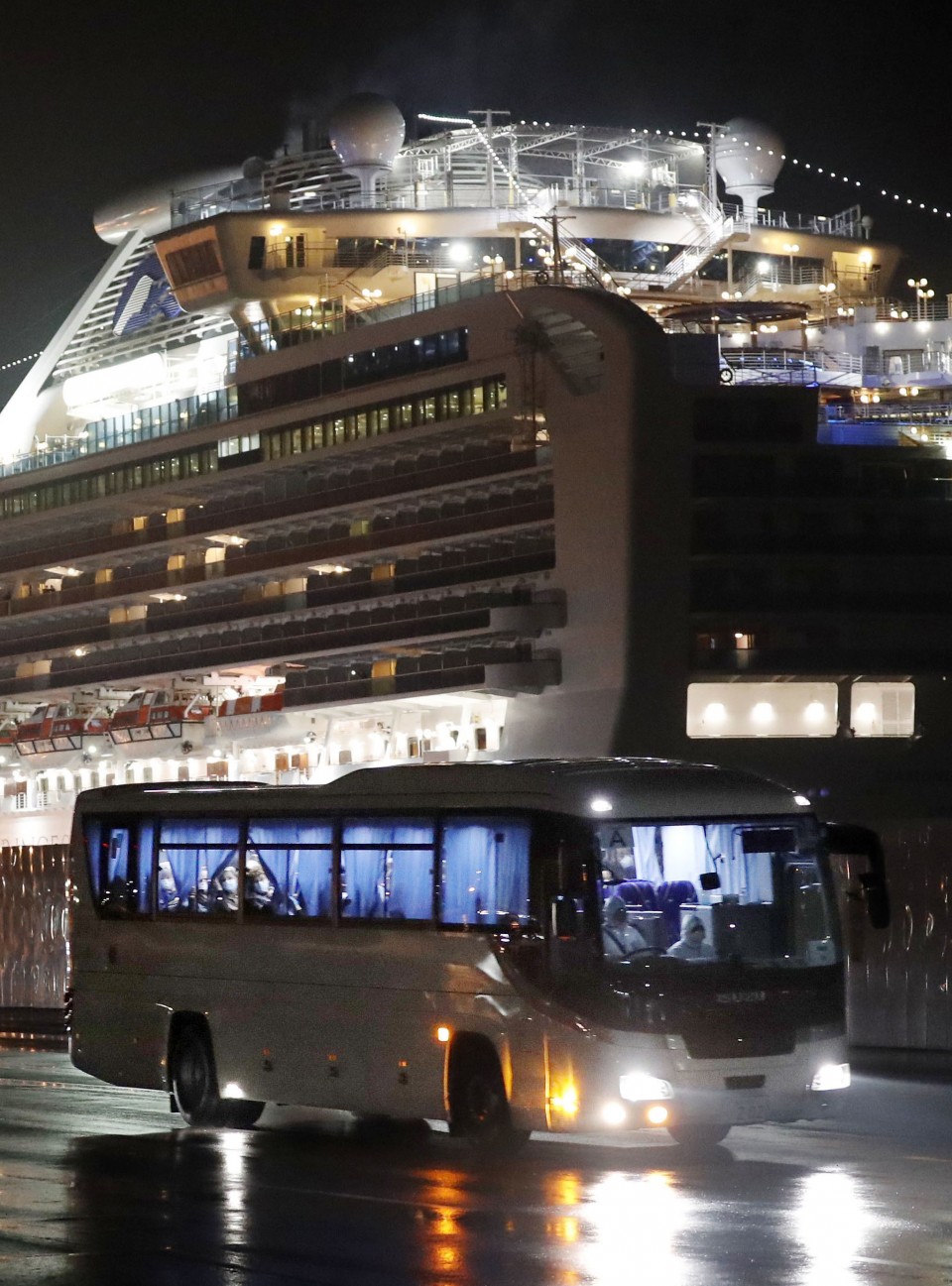 The virus has spread from Wuhan, the epicenter of the outbreak in central China, to more than 20 countries. As of Monday night, Japan has confirmed 520 cases with most found on a quarantined cruise ship, the Diamond Princess, at Yokohama.

The number of cases continued to rise on the vessel as another 99, including 43 Japanese, were reported, bringing the total to 454 with a few days to go until the end of a two-week quarantine period on Wednesday.

The health ministry said its official in his 50s who worked as a liaison on the vessel has been hospitalized after testing positive for the virus, in the latest case of infection among medical and other staffers.

In a separate case in Sagamihara near Tokyo, a nurse was also found to have been diagnosed with the respiratory disease, now officially named COVID-19. She had taken care of a woman in her 80s who last week became the country's first confirmed fatality from the infection.

The nurse in her 40s developed a fever and vomited on Friday. She took a virus test the following day due to her close contact with the woman who died Thursday, according to the Kanagawa prefectural government. 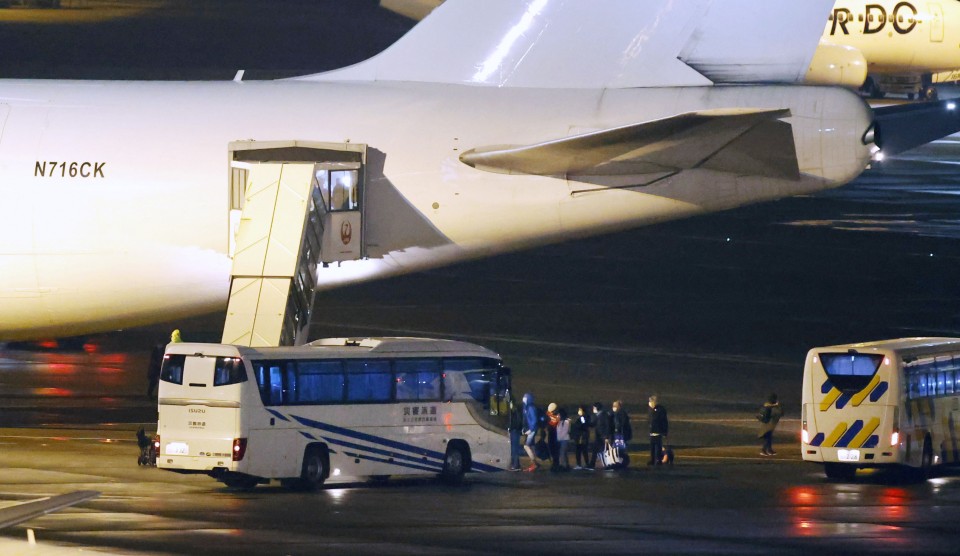 Japan is scrambling to strengthen its virus testing capabilities with its immediate target of 3,000 tests a day and increase medical facilities across the nation to treat infected people.

Raising public concerns, the number of cases despite no recent record of coming into contact with people from virus-stricken regions in China or without symptoms has been increasing.

Prime Minister Shinzo Abe told parliament that the government will strive to provide more information in English while raising awareness about the disease at home by using TV commercials and other means.

The social repercussions of the virus became more visible on Monday, with a birthday event this weekend at the Imperial Palace for Emperor Naruhito, who took the throne in May, canceled.

Tokyo Marathon organizers said the annual race in March will be scaled down.

In unveiling the medical guidance, health minister Katsunobu Kato said at a press conference that people with colds or influenza tend to see their health recover after three to four days on average while those infected with the virus do not.

Kato also asked individuals who have developed cold-like symptoms to keep track of their temperature and refrain from going to work or school.

Earlier in the day, the United States evacuated 328 citizens from the Diamond Princess on two charter flights. The Self-Defense Forces transported them to Tokyo's Haneda airport on 10 buses from Yokohama. 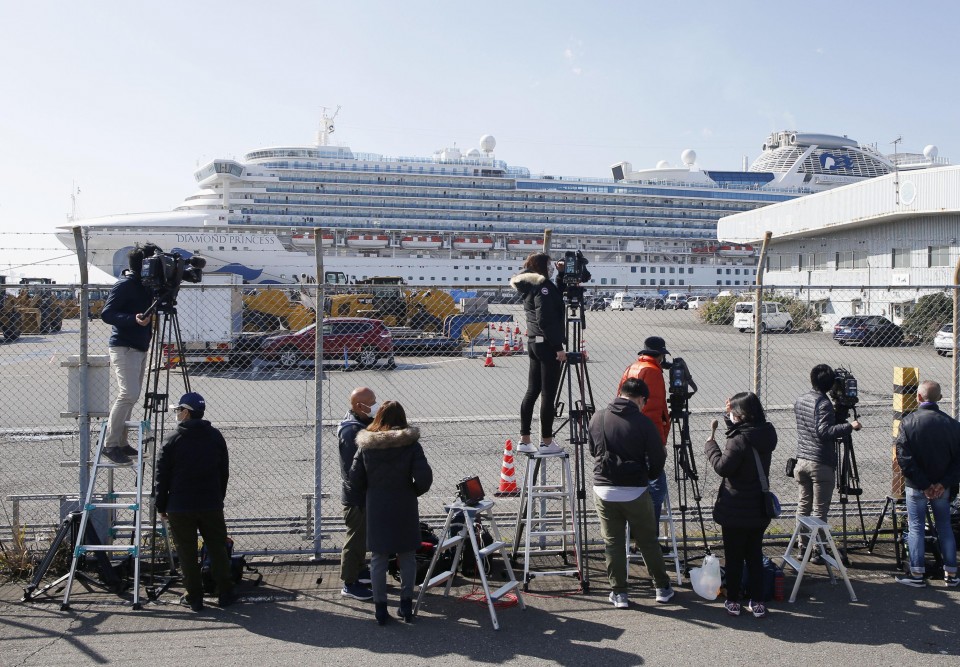 The U.S. State Department said 14 people were found infected with the virus following their disembarkation from the cruise ship but left Japan.

The evacuees will be quarantined for 14 days and housed at Travis Air Force Base in California or Joint Base San Antonio-Lackland in Texas.

Japan had been in contact with the United States about the possibility of evacuating the U.S. citizens since the early stages of the quarantine that began on Feb. 3, Abe said.

"We understand that the United States has made its own decision after comprehensively taking into account such factors as reducing the burden on our country," Abe told a parliamentary session.

Japan also flew a charter flight, the fifth of its kind, from Wuhan to Tokyo, bringing back 65 Japanese citizens and their Chinese family members.

Seven of those were hospitalized while the rest went to a government-arranged facility in Saitama Prefecture near Tokyo, according to the health ministry. A total of 828 people have returned to Japan on the five chartered flights.

Japan may lose $1.3 bil. in tourism revenue due to virus outbreak