For a second year in a row, participants in the event refrained from calling the Russian occupation of the islands "illegal," as they apparently sought to avoid raising tensions between Tokyo and Moscow over the territorial issue.

"I will step up joint work to find a solution that is acceptable to both sides and advance (peace treaty) negotiations steadily," Abe said at the rally held on "Northern Territories Day" that falls on Feb. 7.

Abe has been seeking to resolve a decades-old territorial dispute with Russia and conclude negotiations for a postwar peace treaty. But the two nations have made little headway due to a huge gap over the status of the islands in northern Japan.

Abe is planning to visit Russia to attend a ceremony marking the 75th anniversary of Russia's victory over Germany in World War II on May 9. He has expressed hope to hold talks with Russian President Vladimir Putin there.

Russia wants Japan to recognize that the islands -- called the Southern Kurils in Russia and the Northern Territories in Japan -- were legitimately acquired following Tokyo's 1945 surrender in World War II. Japan, however, has taken the view that the seizure was illegal. 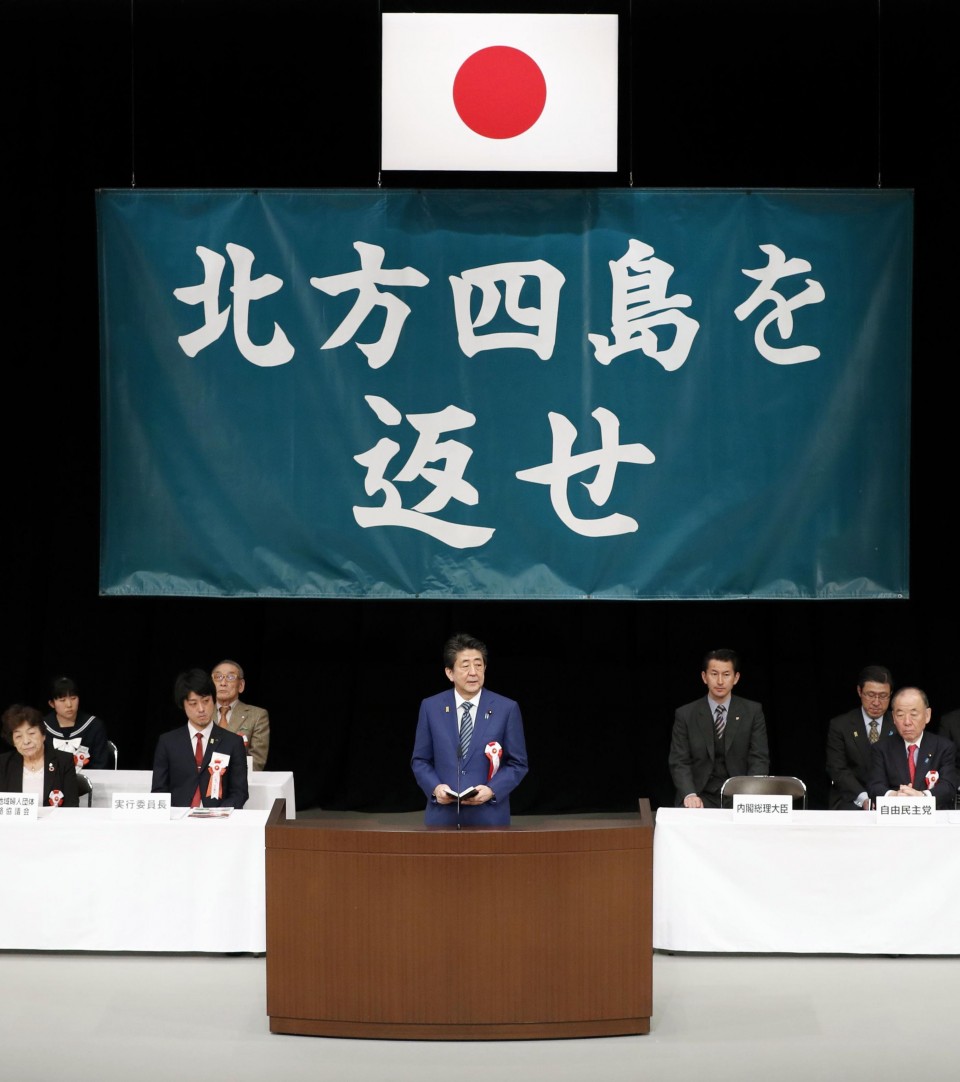 Participants including public and private groups adopted a statement calling for the return of what they described as Japan's "inherent" territories at an early date.

Still, they apparently took heed of the ongoing peace treaty talks and did not say the islands have been illegally occupied, a wording that could irritate Russia.

In the previous rally in February last year, the phrase "illegal occupation" was dropped.

Abe told the annual event that bilateral talks have progressed over joint economic projects on the disputed islands, adding that he hopes to realize them "without undermining the legal positions of Japan and Russia" over the territories.

The joint economic projects are designed to build mutual trust and pave the way for resolving the territorial issue that has prevented Tokyo and Moscow from signing a postwar peace treaty.

Abe and Putin agreed in 2018 to step up peace treaty negotiations based on a 1956 joint declaration between Japan and the former Soviet Union. The document states that two of the four islands -- Shikotan and the Habomai islet group -- will be handed over to Japan following the conclusion of a peace treaty.

Abe has put his weight behind the return of the two islands rather than all four that include Etorofu and Kunashiri. Russia is concerned about the prospect of a U.S. military presence should any of the islands return to Japan as Tokyo and Washington are longtime security allies.

On Feb. 7 in 1855, Japan and Russia concluded the Treaty of Commerce, Navigation and Delimitation, drawing a national border that put the four islands in Japanese territory.

Japan PM Abe to visit Russia in May for talks with Putin: source