North Korean leader Kim Jong Un oversaw military drills Friday, the country's state-run media said Saturday in its first mention of Kim's activities in about two weeks, as the country remained on alert over the spread of the new coronavirus.

The drills were aimed at judging "the mobility and the fire power strike ability of the defense units on the front and in the eastern area," the official Korean Central News Agency said, adding Kim guided them "at the observation post."

North Korea has claimed it has seen no infections with the virus raging in its neighbor China, as it has taken such measures as quarantining foreigners across the nation and cutting off traffic to and from China and Russia since earlier this year.

KCNA, meanwhile, reported Kim led an enlarged meeting of the Political Bureau of the Central Committee of the Workers' Party of Korea, although it did not say when the gathering was held.

"In case the infectious disease spreading beyond control finds its way into our country, it will entail serious consequences," Kim, head of the ruling party, was quoted by the news agency as saying at the meeting. 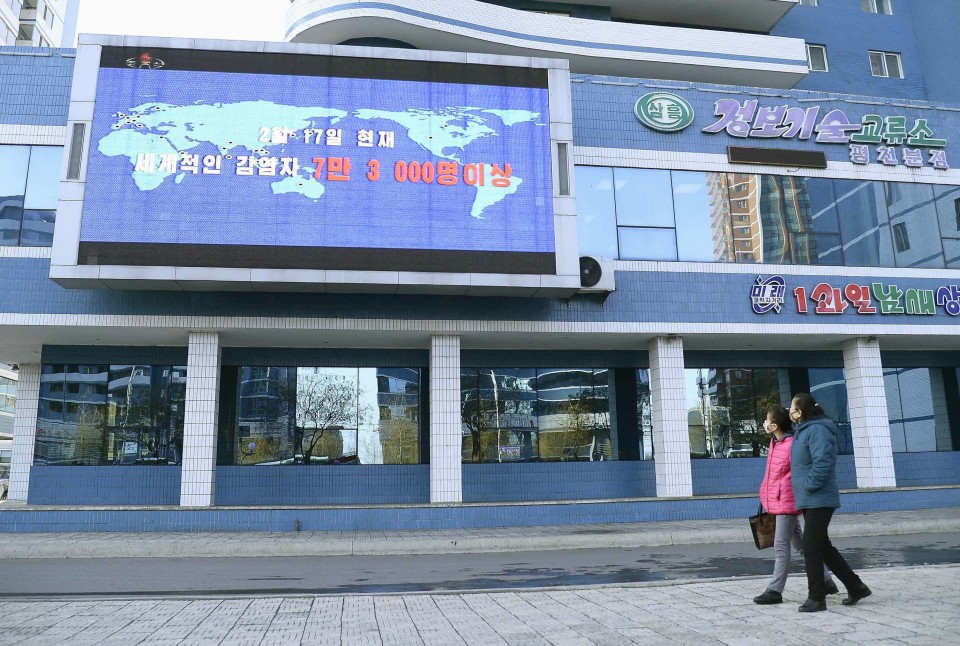 (A large screen seen in Pyongyang on Feb. 18 shows the number of people in the world who have been infected with a new coronavirus)

"An urgent task at present is to supplement and complement the law on the state emergency anti-epidemic and to readjust state crisis control regulations in an orderly way," Kim added, according to KCNA.

North Korea barred foreigners from entering the nation during the 2002-2003 epidemic of severe acute respiratory syndrome, or SARS, and the Ebola outbreak in West Africa in 2014.

At the gathering, a decision was also adopted to disband the party committee's "cadre training base which was involved in the practices of corruption and irregularities, and to impose relevant penalty," the news agency said.

The new coronavirus that causes the disease officially known as COVID-19, first detected late last year in the central Chinese city of Wuhan, has already infected around 80,000 people and killed more than 2,500 in China.