In the future, when someone implores a dining companion to "finish off the meal," it just might mean that they are expected to eat the plate and cutlery, too.

Indeed, this is what Katsuhiko Sakakibara, the managing director of Marushige Seika Co., a confectionery company in Hekinan in the central Japan prefecture of Aichi, has in mind.

He has a goal to reduce the amount of plastic waste around the globe.

"If edible crockery became prevalent throughout society and replaced plastic it would bring about a serious environmental benefit," Sakakibara said in a recent interview with Kyodo News. 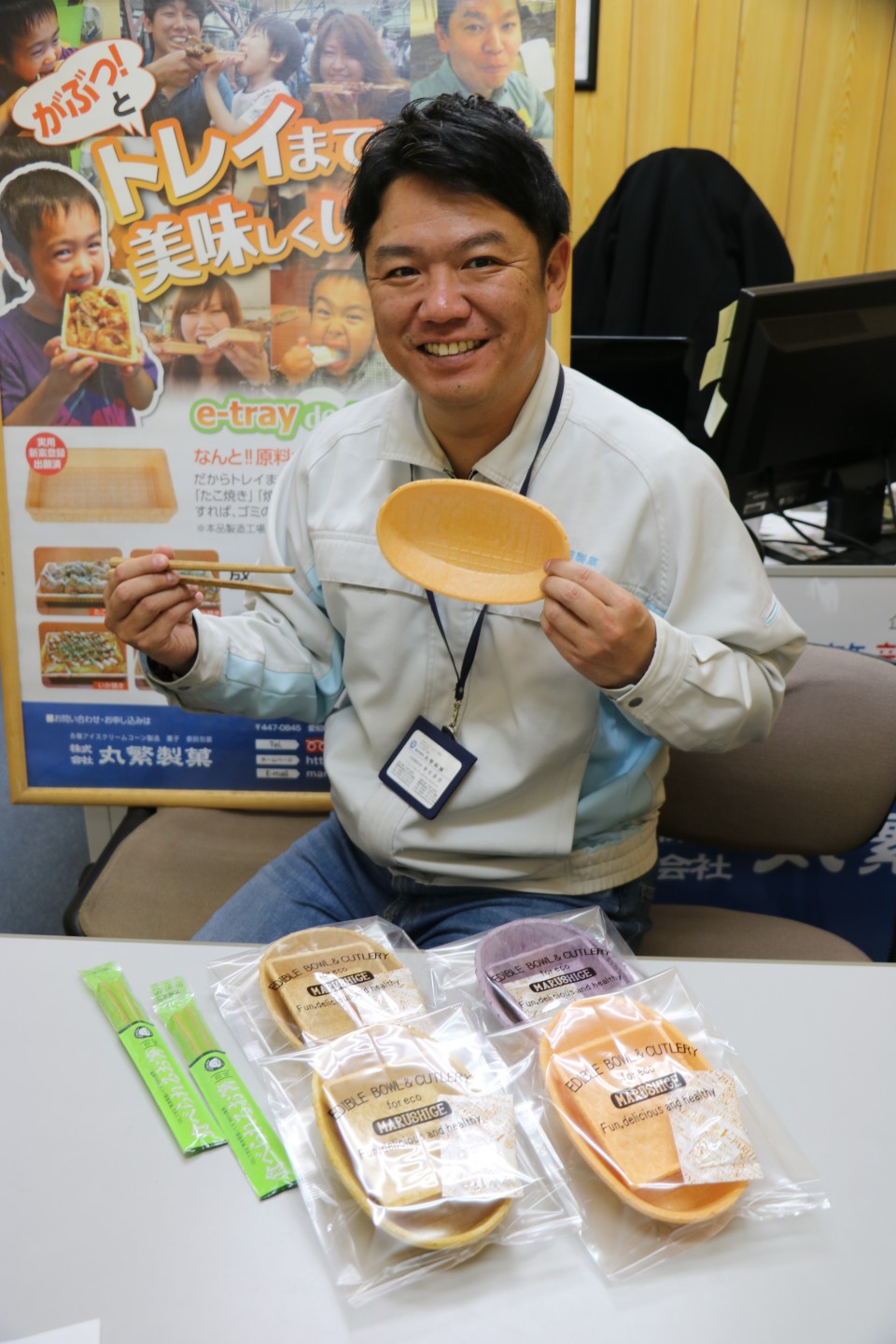 Among them is Marushige Seika, a small business that has been making the shells for ice-cream filled "monaka" wafers since 1983. The annual sales of the company's "e-tray" edible plate product saw an unprecedented spike last year, tripling the figure of 2018.

Crispy like an ice-cream cone, e-trays come in oval and rectangular shapes. They are also durable enough with a thickness of about 5 millimeters.

Sakakibara originally came up with the idea of edible tableware as a way to combat the waste problem about 10 years ago when he visited a "B-1 Grand Prix" event, a famous nationwide food competition at which local specialties are promoted.

At the venue, he saw mounds of single-use plates discarded haphazardly by the hundreds of thousands of visitors who had sampled a variety of dishes at various booths. 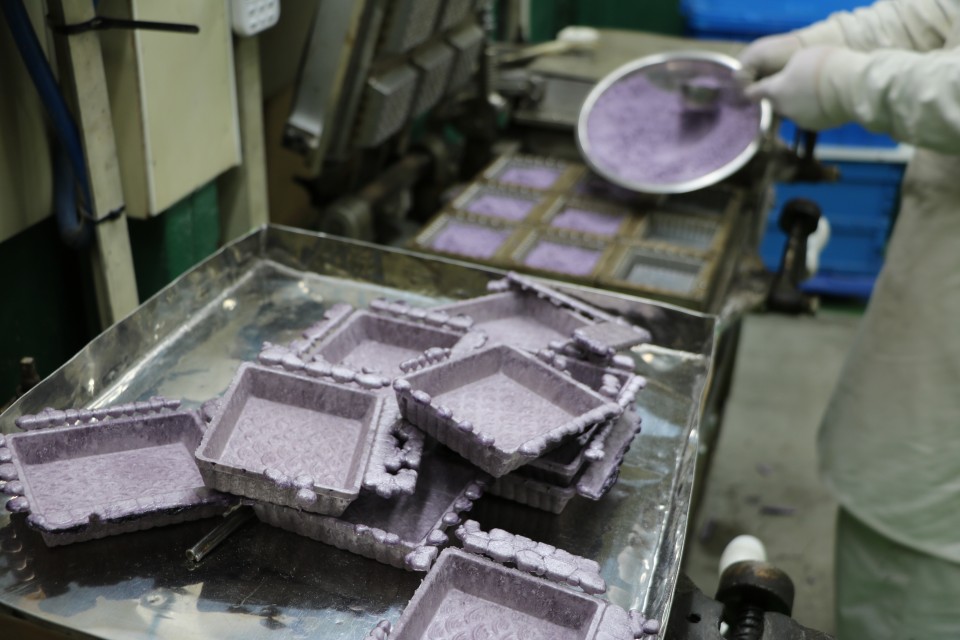 He wondered if there is anything he could do to reduce the amount of waste, deciding he would try to make the plates edible by making them from monaka ice cream wafer, he said.

But he had to ensure his product was not going to fall apart when holding foods with a liquid element. So, he came up with the idea of using the technique for making "ebi-senbei," a hard shrimp cracker made of potato starch, and one of Hekinan's specialties.

As ingredients for edible plates, Sakakibara picked potato starch instead of wheat flour and corn starch typically used in ice cream wafers. Both can hold up against water for an hour.

"Potato starch tends to swell when baked, and I thought that, by baking it with metal molds while applying high pressure, the plates would be hard and resistant to moisture," Sakakibara said.

It took about one and a half years for him to make his e-tray design a reality and a saleable product. But even after that, he still used trial and error to perfect and refine the method of production until he got it right a few years ago. 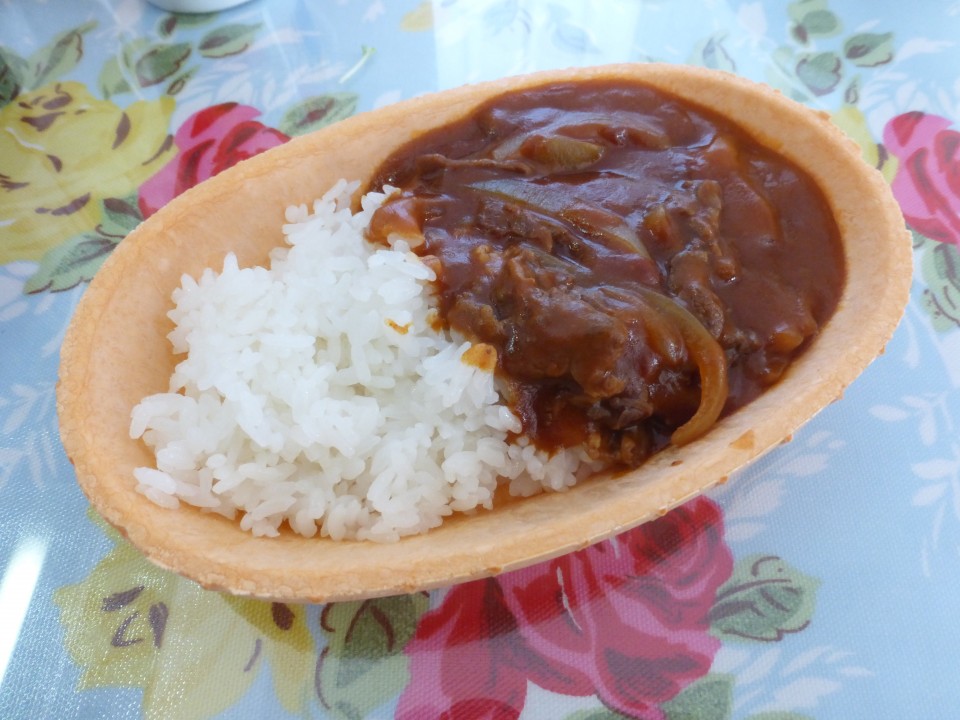 (Rice with hashed meat dished up on an oval "e-tray" plate made by Marushige Seika Co.)

"Even if the plates are discarded and left uneaten, they will decompose faster than biodegradable plastics, or become food for animals," Sakakibara said, adding that he also is confident the plates, which come in flavors including ebi-senbei, onion, sweet potato and corn, taste good.

In the years since the product's launch, he has tried to explore new sales channels by paying frequent visits to outdoor events at which street vendors sell food and where large amounts of plastic waste accumulate. There was a sudden and unexpected change last summer, when the orders of e-trays began to increase.

"I guess that reflected growing public concern with (the damage done by) plastic waste," Sakakibara said.

Edible chopsticks went on sale in 2017, the company's second edible product. Sakakibara plans to further expand the company's lineup, turning to edible spoons next, which he plans to release by this summer.

Looking outside the country, edible tableware such as tumblers, food wrappings, and even coffee cups, including those introduced by Air New Zealand on a trial basis for in-flight meals in December, have already been commercialized. 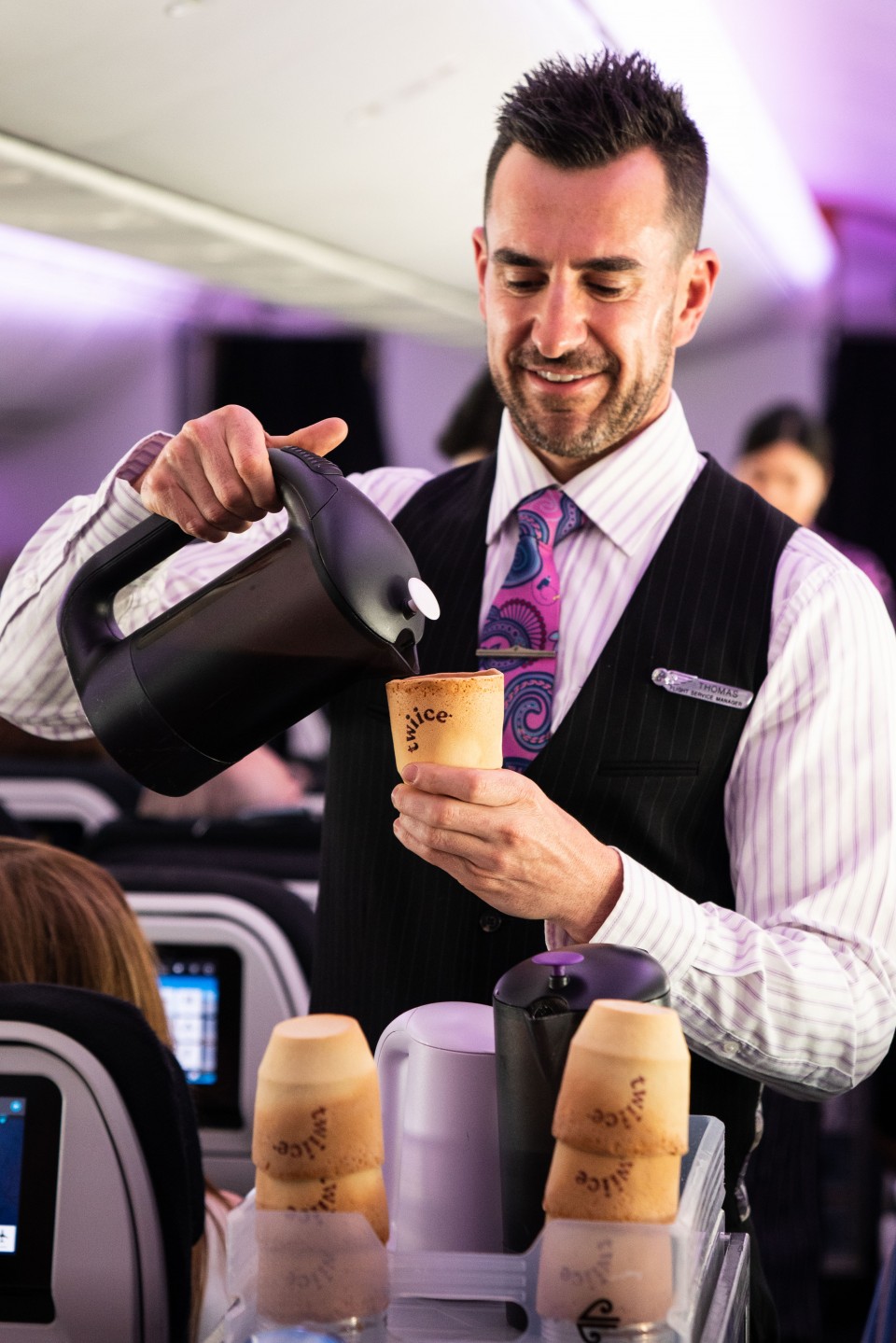 "When we were trying to develop ideas to combat the plastic waste issue, we hit on a good plan of revamping one of our existing products that is straw-like," said a public relations official of the company, adding that it has been approached by cafes in and near Tokyo about using them.

Compared to overseas markets of edible tableware, however, the size of the domestic Japanese market is still small, with a limited number of companies making such products, according to Sakakibara.

Perhaps the biggest challenge to overcome before spreading edible tableware is the cost. For example, an e-tray costs at least 50 yen (45 cents), about 10 times more than disposal plastic plates.

Sakakibara also says that people may be reluctant to eat plates that had been placed on the floor or a dirty surface, for example, while pointing out that leaving the plates to decompose rather than consuming them is also an environmentally-friendly option.

But he appeared unfazed by the downside. "There must be certain people who will still choose edible items because of their eco-friendliness, even if they're more expensive. In the short term, I understand that not all disposable tableware will be replaced."

The next goal Marushige Seika has set is to make the business self-sustaining and able to survive, but it is far from his main concern.

"Of course, earning money matters, but now, heightening people's awareness of reduction of trash and plastic waste matters more," Sakakibara said. "I hope edible tableware will contribute to this."