Tampa Bay Rays rookie Yoshitomo Tsutsugo slugged his first major league home run -- albeit a preseason one -- on Monday in a 2-2 tie with the Boston Red Sox.

After getting a hit in his preseason debut on Sunday, Tsutsugo tied Monday's game at 1-1 in the fourth inning after crushing a fastball from Red Sox left-hander Jeffrey Springs into the left-center deck at Charlotte Sports Park. 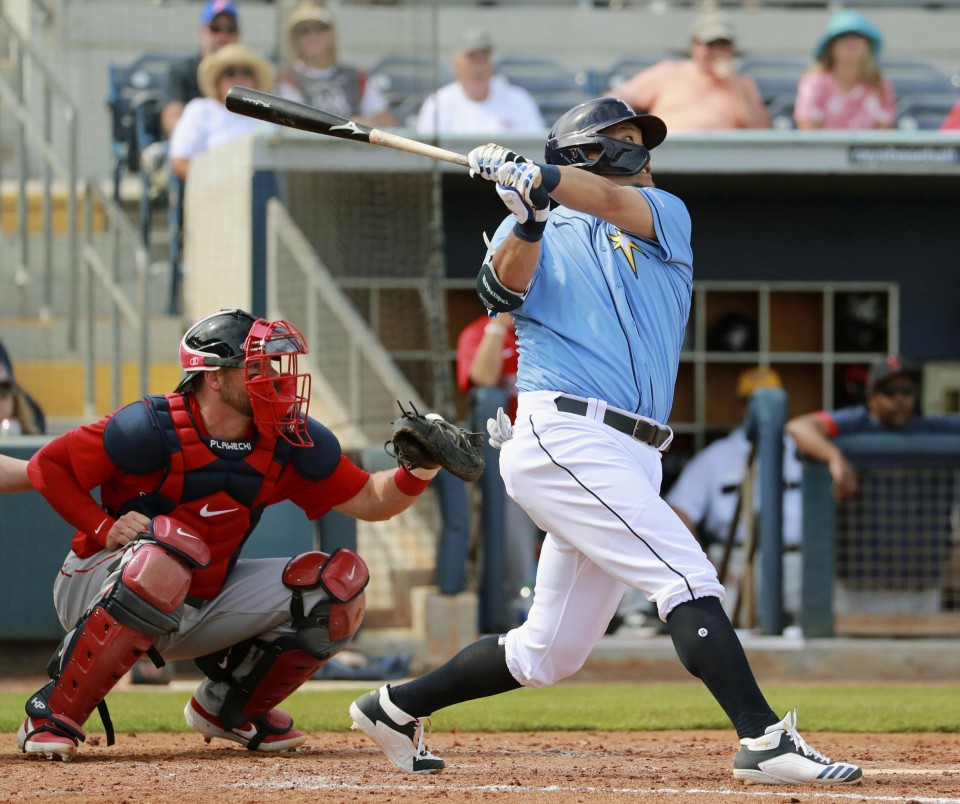 (Yoshitomo Tsutsugo hits a home run in the fourth inning of a spring training game against the Boston Red Sox in Port Charlotte, Florida, on Feb. 24, 2020.)

"It felt good. I was conscious to some degree of (hitting to) the opposite side (left-center field)," said Tsutsugo, who bats left and throws right.

Tsutsugo, who joined the Rays after 10 seasons with Japan's DeNA BayStars, is now 2-for-2 with a single and a home run this preseason, and has drawn two walks in four plate appearances.

"The regular season is the most important, so I'll just keep preparing for the season," he said.

Elsewhere in Florida, Toronto Blue Jays rookie Shun Yamaguchi had a shaky preseason debut, giving up three hits, three runs, a walk and hitting a batter in 2/3 of an inning. The Blue Jays came back to beat the Atlanta Braves 4-3.

Yamaguchi said one of his biggest challenges will be adjusting to the larger balls used in Major League Baseball.

"I think it's best to get used to the ball. I need to take steps to make sure that my feeling doesn't change like it did in this game when I make small adjustments to the ball," Yamaguchi said.

In Fort Myers, Kenta Maeda started his first game with the Minnesota Twins but did not factor in the decision in a 3-2 win over the Boston Red Sox.

Maeda, who was traded after four seasons with the Los Angeles Dodgers, gave up a homer off his second pitch of the game and allowed the Twins to fall into an early deficit, but retired the side in the second of his two innings on the mound.

"I was able to communicate and I had a lot of fun without really being aware I'm on a new team," Maeda said. "It was a good feeling, and I'm glad I corrected well in the second. I'm off to a good start."

Among other Japanese players, Miami Marlins spring training invitee Gosuke Katoh singled and scored a run in a 6-3 win over the St. Louis Cardinals.

Junichi Tazawa, now on a minor league contract with Cincinnati, tossed a scoreless inning in the Reds' 9-6 win against the Texas Rangers.