Japan is ramping up efforts to counter mounting criticism about its emergency response to the new coronavirus outbreak, especially its handling of the Diamond Princess cruise ship that was quarantined at a port in Yokohama near Tokyo.

Chief Cabinet Secretary Yoshihide Suga acknowledged that the government has been making unprecedented decisions in dealing with the epidemic. "It's a first for us. We've been doing our utmost to prevent (a spike in infections)," Suga said at a press conference on Thursday.

The government is under scrutiny over its decision to keep thousands of passengers and crew confined on the ship, which critics say increased the risk of group infections and led to over 600 confirmed cases, the largest outside China where the virus originated.

With the end of the quarantine on Wednesday, critics now question Japan's approach to allowing passengers to disembark and return home after testing negative for the pneumonia-causing virus.

The response contrasts with countries that have flown charter flights and evacuated their own citizens on the Diamond Princess. The United States, for example, has put its citizens under a 14-day quarantine after their return on Monday. South Korea is doing the same. 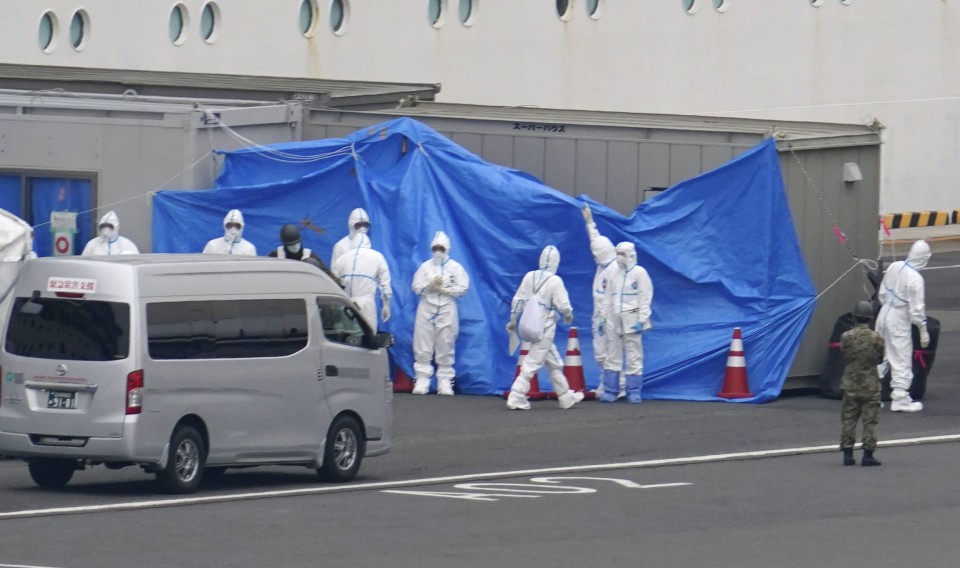 The number of infections on the ship -- initially carrying 3,700 passengers and crew -- has topped 600 and two elderly Japanese passengers, who had been hospitalized and tested positive for the virus before the quarantine ended Wednesday, died Thursday.

Kentaro Iwata, a professor at Kobe University Hospital who was allowed aboard Tuesday as a member of the government's disaster medical assistance team, described the situation on the Diamond Princess as "chaotic" in a now removed video clip on YouTube. He said he was "so scared of getting COVID-19 because there was no way to tell where the virus is," using the virus' official name.

The video, both in Japanese and English, went viral and caught the attention of foreign media amid a lack of information provided in different languages. After Prime Minister Shinzo Abe stressed the need to provide more information in English, Suga said Thursday that the health ministry has started to turn to professional translators, not machine translation, in releasing updates on the website.

The cruise ship was put under quarantine since it arrived at Yokohama earlier this month as a passenger who disembarked in Hong Kong on Jan. 25 was found to be infected with the virus. The U.S. Centers for Disease Control and Prevention has said the quarantine "may not have been sufficient to prevent transmission" among those on board.

Health minister Katsunobu Kato, in charge of Japan's quarantine efforts, told parliament the government had expected infections would rise as days passed by.

"As of Wednesday, 621 people (on the cruise ship) tested positive for the virus. Did we anticipate infections on this scale? We didn't have such a specific number but we expected (infections) to increase," Kato said in a parliamentary session.

Kato said the government plans to take a fresh look at the way it has handled the Diamond Princess situation and discuss how to better deal with similar cases should they occur.

However, opposition party lawmakers have raised questions about whether substantive discussions on the Diamond Princess and other issues related to the virus were held in a spate of meetings by a government task force on the coronavirus. A total of 11 meetings have been held since Jan. 30, mostly at the prime minister's office, with each lasting about 10 to 15 minutes.

Revelations that three Cabinet members, including Environment Minister Shinjiro Koizumi, had skipped Sunday's task force meeting due to events in their own constituencies also drew a sharp rebuke, even from the ruling coalition of the Liberal Democratic Party and Komeito.

Globally, the death toll from the viral outbreak has exceeded 2,000, mainly in China, and over 70,000 infections have been reported. Japan has confirmed three deaths.

Biden gets COVID-19 booster shot after authorization for elderly