Foreign diplomats in Japan have toured a sake brewery near Tokyo to study how the beverage is made in a project the Japanese government and the sake industry hope will promote the traditional rice wine overseas.

The National Tax Agency, which co-hosted the project with the Japan Sake and Shochu Makers Association, aims to boost promotion of sake and other Japanese-made alcoholic beverages abroad this year as Japan hosts the Olympics and Paralympics.

In the tour at Iinuma Honke Co.'s brewery in Chiba Prefecture on Feb. 13, some of the 12 diplomats and their family members from the United States, India, South Korea, Hungary and Brazil experienced mixing "moromi" -- a fermenting mixture -- using a wooden rod under the guidance of chief brewer Koichi Kawaguchi.

"The brewery dates back 300 years when the head of a village around this area started manufacturing sake with leftover rice," Kawaguchi told the visitors, who were wearing white coats and caps for hygiene.

He guided them through the facility, following each process having first shown the rice from which sake is made, as well as explaining the equipment, including a modern distiller installed around 2005. 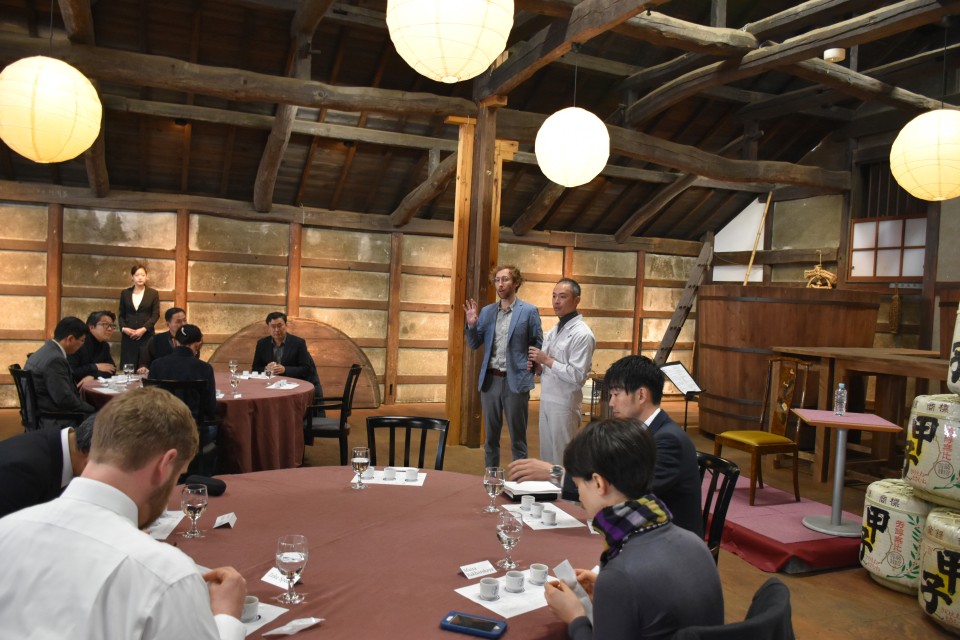 After the tour, the visitors tasted three different types of the brewery's primary brand, Kinoene.

Kawaguchi described each type in order -- one having a fruit-like smell and a clean finish, the second a heavy taste designed to suit meat dishes, and the third, made in 1997, a caramel-like smell with a rich and strong taste.

"I think Americans have a great appreciation for Japanese culture. Japanese food is a big part of that and sake can be found at many Japanese restaurants in the United States," said Zeke Spears, an agricultural attache at the U.S. Embassy.

According to Japanese government data, the United States imported 6.3 billion yen ($56 million) worth of sake from Japan in 2018, making it the largest importer from the country. Hong Kong came second, China third and South Korea fourth.

By volume, Japan exported 25,747 kiloliters of sake in 2018, up 9.6 percent from the previous year and a record high for the ninth consecutive year, with demand for Japanese cuisine increasing.

"I think sake is seen as a distinctly Japanese drink that pairs well with Japanese food," Spears said. "I think a lot of Americans would be interested in learning more about the different styles of sake and how they could be paired with American food."

Mateus Xavier, a deputy counsel in the Brazilian Consulate General in Tokyo, expressed his enjoyment as well. "It was my first time and was a wonderful experience," he said.

After the tasting, Xavier's wife, Livia Bergamashcine, said, "I appreciate the explanation of the sake. I preferred the second one. It smelled good."

As of the end of March 2018, there were 1,636 certified sake breweries in Japan, whose numbers have been gradually declining since around 1990, according to National Tax Agency data.