The Tokyo Olympics face a lengthening list of concerns as the clock ticks down to the opening ceremony -- a bid bribery scandal, dangerous summer heat, transport congestion and a potentially catastrophic coronavirus outbreak -- but a lack of snowfall is an unexpected addition.

Organizers had hoped both real and fake snow would help keep spectators cool during the July 24-Aug. 9 sports festival after they tried other cooling solutions like misting machines, chilled scarfs, umbrella-like hats and potted morning glories.

But plans to transport snow from Minamiuonuma in Japan's north-central Niigata Prefecture, a skiing and snowboarding resort famous for its deep powder snow, to Tokyo are under threat because of a record shortage in snowfalls.

Japan's ski resorts are enduring their worst snow season in decades as a result of mild winter temperatures, forcing many to postpone opening dates or cancel the season altogether. With many Japanese and international visitors who normally flock to the country for its near-unrivaled amounts of snow not arriving, concerns are being raised over the impact on tourism in the short and long term.

According to the Niigata District Meteorological Observatory, large amounts of snow are not expected to come any time soon, spelling trouble for local authorities who are having to consider transporting it from higher elevations.

"I don't ever recall experiencing a no-snow winter like this one," said Mutsumi Seki, a Minamiuonuma city employee in charge of a snow storage facility near the ski resort.

"We welcome any amount of snow, but we don't need any more rain," he said.

Two years ago, Minamiuonuma built a 2,500-square-meter storage facility that can hold 1,600 tons of snow to ensure a supply for special events held in the Tokyo area. But in the first week of February, only a few centimeters of snow had settled there.

The shortage has also proven a challenge for two of 10 local ski fields, and the cancellation of the annual Minami Uonuma Snow Festival was recently announced by the city's resort tourist association.

Last August, a demonstration of an air-conditioning system using snow stored in Minamiuonuma was held in front of Saitama Stadium and Saitama Super Arena, the Olympic soccer and basketball venues, on game days, and the two cities' efforts were met with optimism.

"It was fun to be able to touch snow in the summertime," said one person who took part in the demonstration experiment. 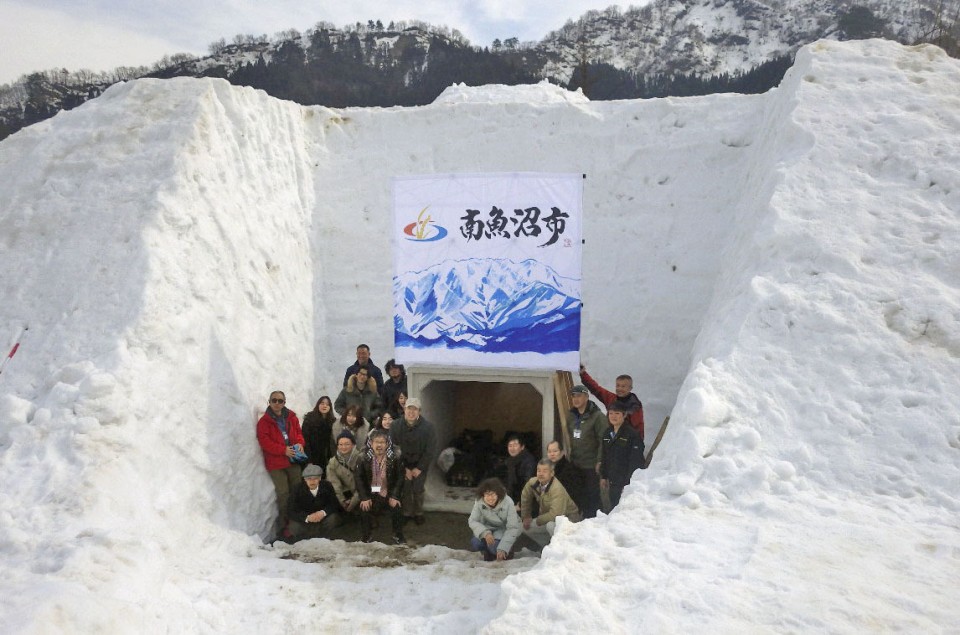 The plan had been to send the snow by rail or road, set up tents with these snow coolers and pass out 10,000 personal snow packs at the soccer and basketball venues in Saitama every day during the Games.

But more than 100 tons of snow, equivalent to 10 large-sized trucks, are needed to make the plan work during the Tokyo Games.

The Tokyo Olympics already announced a plan to provide 1,360 tons of ice to be used as cooling baths for athletes. Volunteers will be given bottles of water, salt tablets, wet wipes, cooling packs and ice cream in order to stay hydrated.

Since relying on the snow storage facility is proving an unrealistic option for Minamiuonuma officials, they have started looking into collecting snow from sites around Sagurigawa Dam, located at an altitude of 440 meters.

"This is a perfect opportunity to showcase the attractiveness of Japan's yukiguni (snowy regions). All we can do is pray for heavy snowfall," said a Minamiuonuma official.

With fears over heat dangers at the Tokyo Olympics growing, a "cooling project" was launched in June 2019, with games organizers publishing a 38-page overview of countermeasures being taken to minimize the risk of heat on athletes, spectators, workers and volunteers at the Summer Games.

Last summer, more than 100 people in Tokyo's 23 wards died of heat-related causes and thousands were taken to hospitals in ambulances. The last Summer Olympics in Tokyo, in 1964, were moved to October to address these problems.

About 28 million yen ($255,000) has been set aside specifically for heat-busting measures using snow. Saitama and its friendship city Minamiuonuma will split the cost.

Both Saitama and Minamiuonuma can only hope for lower temperatures in the coming weeks, with still a long way to go to reach the latter's seasonal average and catch up on its snowfall deficit.

"It's obvious this year has been different from other years, and I'm guessing heavy snowfall will be coming (soon). We'll try to be in close communication with Minamiuonuma," a Saitama official said.