The number of new coronavirus infections among passengers and crew of the Diamond Princess cruise ship quarantined near Tokyo has risen by 70 to 355, the government said Sunday, while more domestic cases were also reported and experts warned the situation could worsen.

Of the 70, 38 did not show symptoms such as fever and coughing, the Ministry of Health, Labor and Welfare said. It has so far tested a total of 1,219 people aboard the ship, which currently houses about 3,400 passengers and crew.

The development came as two U.S. government-chartered planes were set to arrive in Japan to evacuate the approximately 400 U.S. citizens aboard the ship.

Canada, Hong Kong and Israel have also said they are preparing to send chartered flights to Japan to evacuate their citizens from the vessel.

Japan in the evening sent its fifth chartered flight to evacuate nationals from the central Chinese city of Wuhan, the epicenter of the outbreak. More than 700 people were repatriated on the four previous flights. 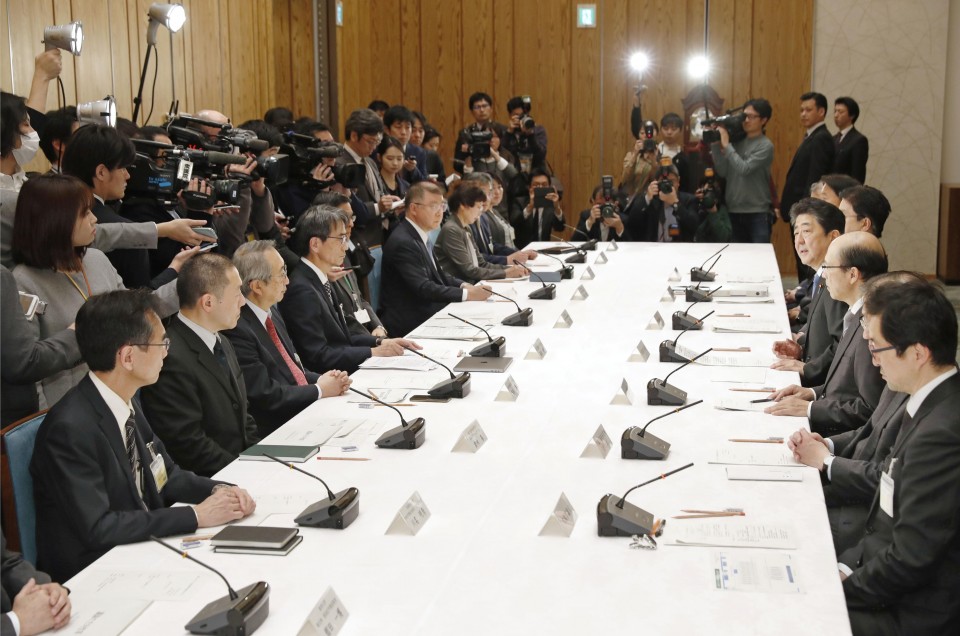 (A meeting of experts on the new coronavirus)

The Japanese government held a meeting earlier in the day to discuss expanding countermeasures as more infections were reported in Tokyo and Aichi Prefecture.

Prime Minister Shinzo Abe told the meeting of ministers that the government would increase the number of medical facilities that can accept infected people to 800 from the current 726.

The number of infections confirmed in Japan grew to 414, including 355 on the Diamond Princess.

"We agreed that the present situation represents the early stage of a domestic outbreak. This could progress further," Takaji Wakita, head of the National Institute of Infectious Diseases who chairs a government task force, told a press conference after its first meeting at the prime minister's office.

Health minister Katsunobu Kato said at the same news conference that the government needs to "take countermeasures to deal with the possibility that patients could increase."

The Diamond Princess has been placed under two-week quarantine at Yokohama Port after a passenger who disembarked in Hong Kong was found to be infected with COVID-19, a new type of pneumonia-causing coronavirus.

The ministry said it had been testing people aged 70 and older, and will focus on testing those younger than 70 from around Sunday.

If people test negative and have no health problems, they will be allowed to disembark when the quarantine period ends on Wednesday.

Americans on the ship will be transported to the State Department-chartered planes at Tokyo's Haneda airport. The planes are scheduled to leave on Monday.

They will be screened before boarding the aircraft to "prevent symptomatic travelers from departing Japan," the Centers for Disease Control and Prevention said in a statement released Saturday, suggesting those showing symptoms will receive treatment in Japan.

On their return to the United States, the passengers will be subject to 14-day quarantine and housed at two federal quarantine sites for repatriated travelers in California and Texas, according to the CDC.

In Beijing, authorities said Sunday the death toll from the COVID-19 outbreak had risen by 142 to 1,665 in mainland China.

The Chinese government also said it confirmed 2,009 new infections, bringing the total number of cases to 68,500.