Chinese health authorities said Monday that the death toll in the country from a new coronavirus has reached 361, topping that of the 2002-2003 SARS epidemic on the mainland, as markets reopened with a steep drop following an extended holiday amid the outbreak. 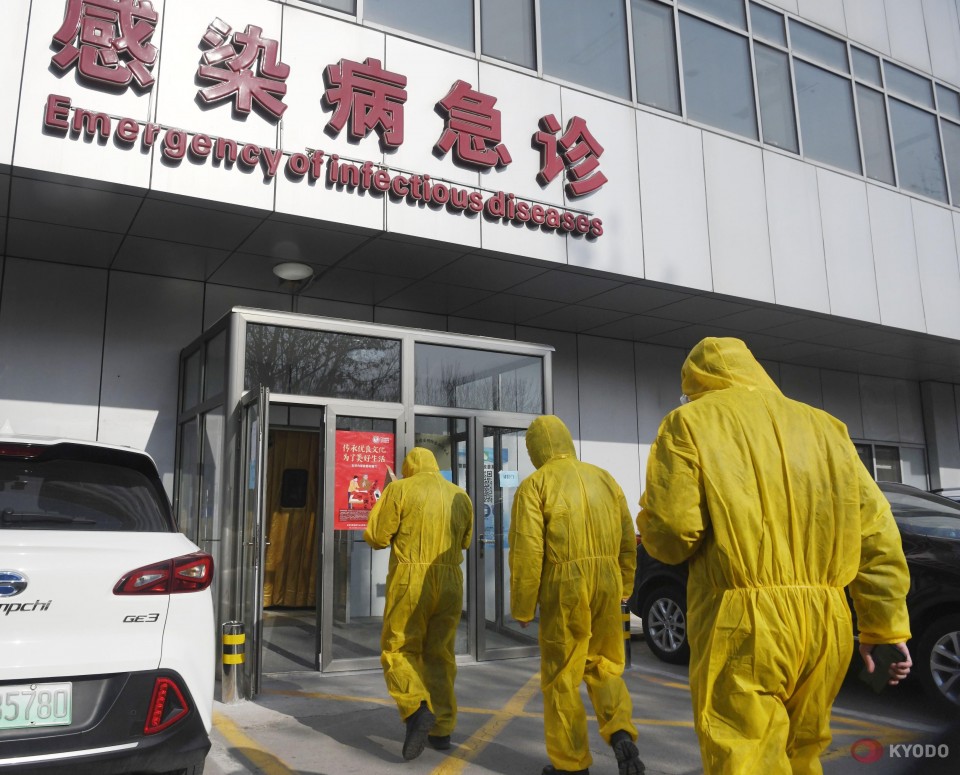 (Medical staff in protective gear are pictured at the entrance of a hospital in Beijing on Jan. 31, 2020.)

The number of infections increased more than 2,800 from Sunday to some 17,200, while the number of suspected cases has exceeded 21,000, it said.

Of the new deaths, 56 were in Hubei Province, whose capital Wuhan is the epicenter of the outbreak, and one in the southwestern city of Chongqing, according to the commission.

The outbreak of SARS, or severe acute respiratory syndrome, killed 349 in mainland China and 774 worldwide.

According to the Chinese government, the total number of trips by car, rail or airplane between Jan. 10 and Saturday was 1.27 billion, down 24 percent from the previous year's Lunar New Year holiday.

Everywhere in China, authorities have been stepping up measures to prevent the expansion of the virus, such as checking the temperatures of all people who use public transportation.

The Chinese government has shut businesses and schools and encouraged "self-isolation" at home in an attempt to contain the outbreak.

The leadership of President Xi Jinping has voiced its full commitment to implementing preventive measures in a bid to minimize adverse effects on people's lives and the economy.

As a result of imposing strict travel restrictions in the area around Wuhan, congestion associated with returning home from the holiday, which was extended to Sunday, was reduced to a certain extent.

In Wuhan, where the number of infections has passed 5,000, a new hospital that was built from scratch in just a week was opened Monday. Huoshenshan Hospital is one of two dedicated facilities being constructed to help tackle the outbreak.

However, the bed shortage remains serious as the increase has not kept pace with the rise in the number of infected people.

In the capital Beijing, many commercial facilities and restaurants continue to be closed. A taxi driver said, "I don't know who has the virus. It's crucial to bring in customers."

It was the biggest one-day decline in the Shanghai Composite since August 2015, when the People's Bank of China unexpectedly devalued the yuan.

Amid delays in factory reopenings and sluggish personal consumption, the dominant view is that the outbreak will further exacerbate China's economy.

The new virus has infected more people than SARS during its outbreak, in which some 8,000 were stricken globally.

However, the fatality rate in the latest epidemic has been lower than the SARS pandemic, which had a fatality rate of around 10 percent. The outbreak of the new coronavirus has resulted in death for roughly 2 percent of those infected so far.

The World Health Organization declared last week that the rapid spread of the virus is a public health emergency of international concern.