Sex offenders who target children could have been included, it says.

The nonprofit group Lighthouse submitted a petition with 3,840 signatures to the Justice Ministry in January, demanding the government review the criteria for pardons to disqualify pedophiles, if not on this occasion, then in future cases of amnesty. 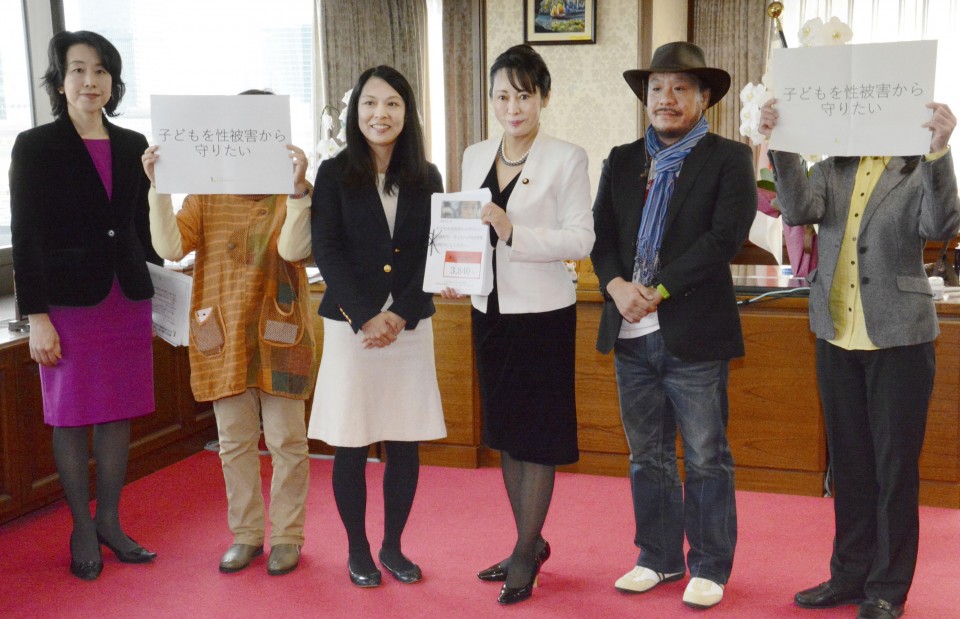 Lighthouse founder Shihoko Fujiwara criticized Japan's lax treatment of sex offenders, saying they could be granted a chance to reapply for national licenses previously taken away and regain status that would place them in proximity to children once again.

"Traffic accidents and theft may hurt people, but if you think about the amount of pain inflicted on a child (who falls victim to sex offenders) -- crimes should be weighed according to their consequences," Fujiwara said in a recent interview.

In October, the government pardoned about 550,000 petty criminals who were fined at least three years ago. The move reduces the prohibition on violators qualifying for national licenses and restores their civil rights.

Under Japanese law, those who have been convicted of minor offenses or fined are not allowed to apply for national licenses, such as driver's licenses, for five years. A pardon, however, reduces the wait to three years.

Separately, the government decided to grant special individual pardons for those fined for minor infractions within the last three years and whose job prospects have been impacted.

Individuals who wish to be considered for the special individual pardons were required to file their requests with public prosecutors, prompting a rehabilitation panel under the Justice Ministry to examine their circumstances.

Around 700,000 people met conditions to file for amnesty under this category, but only about 1,000 are expected to have been pardoned. Lighthouse called on the ministry to reject requests for special pardons by offenders in sex crimes against children.

The government has not made clear whether those with a record of sex crimes against children were entitled to special pardons this time, nor has it explicitly excluded such offenders from the amnesty for petty criminals.

Of the 550,000 petty criminals pardoned, traffic violators accounted for 65.2 percent, followed by those convicted of causing death or injury in traffic accidents at 17.4 percent, assault or injury at 3.3 percent, and theft at 2.6 percent.

Japan last pardoned criminals in 1993 to mark the emperor's marriage, while more than 10 million received amnesty and had their civil rights restored in 1989 following the death of Emperor Hirohito, the current emperor's grandfather posthumously known as Emperor Showa.

The country has relatively soft sentencing for first-time offenders, such as possessors of child pornography who are often given minimal fines, with many pleading ignorance of the law, Fujiwara said.

"We (Lighthouse) often talk to the police and have noticed that fines (for child-related sexual crimes) are really common. But as long as the suspect isn't a government official or someone who works for a major company, it's unlikely that it becomes major news," she said.

Furthermore, the offenders' families and workplaces are sometimes not informed. "They pay up, nobody knows, and it's done," Fujiwara added.

According to the Justice Ministry's 2015 White Paper on Crime, the recidivism rate was high among those convicted of molestation and voyeurism -- offenses whose victims were not limited to children -- with 36.7 percent and 28.6 percent found guilty over new sex crimes within five years, respectively.

Additionally, a large portion of those found guilty have an employment background involving children. Indeed, 16 percent of those who visited the clinic for treatment between 2006 and 2019 had professions in education, and all have been men, Saito explained.

"There is a culture in Japan which tolerates viewing children as objects of sexual desire," he said. "Pedophilia isn't a Japanese-specific problem, but it has been relatively unregulated in this country."

The move to pardon criminals has frequently come under criticism due to its relative obscurity, Fujiwara noted, and she questioned the way the decision was taken on this occasion. "It was all crudely done, based on the government's belief that it's 'traditional' to hand out pardons when the emperor changes. To implement it with barely any discussion is insensitive."

Fujiwara expressed hope that her campaigning will clarify amnesty conditions, if and when the pardons are carried out again so that those convicted of sexual crimes against children would definitively be disqualified.

"I've heard people say it's too late to raise our voices because what's done is done," Fujiwara said. "But we don't think it's useless -- we should speak up when we think something is wrong."