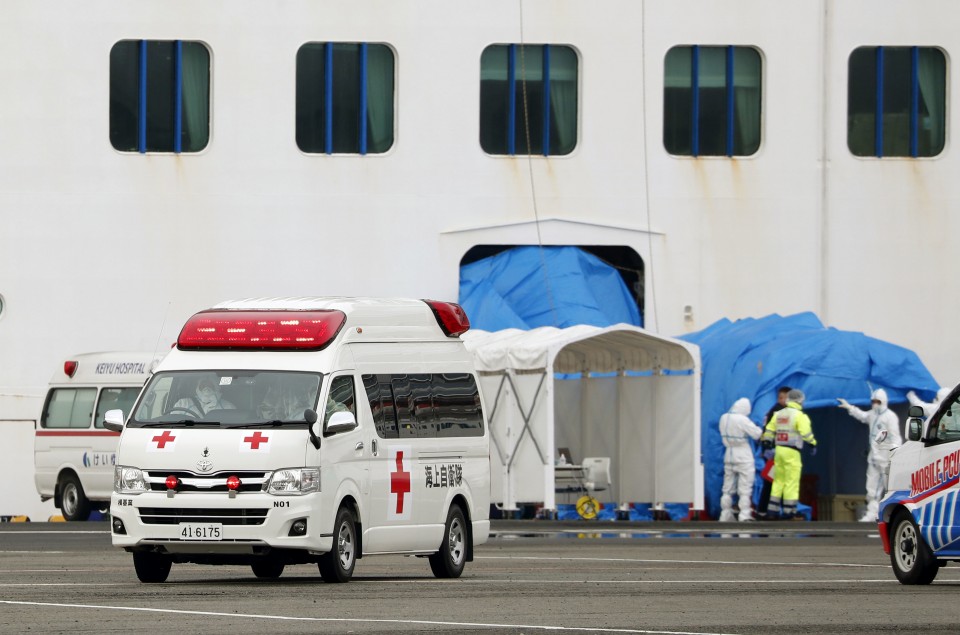 (An ambulance on Feb. 14, 2020, leaves Daikoku Pier in Yokohama where the cruise ship Diamond Princess remains in quarantine after a number of the 3,700 people on board were diagnosed with a new coronavirus.)

TOKYO - The U.S. government will send chartered aircraft to Japan to evacuate American citizens and their families from a coronavirus-hit cruise ship quarantined near Tokyo, its embassy said Saturday, amid concerns about deteriorating sanitary conditions on the vessel.

Japan confirmed more infections on the Diamond Princess as monitoring continued for its passengers, while also announcing additional cases within the country including those at a hospital. Facing a number of cases whose infection routes cannot be tracked, the government admitted it is "facing a different situation."

The U.S. aircraft will arrive in Japan on Sunday evening and leave Tokyo's Haneda airport the following day, the embassy said. The passengers will be transported to the airport on buses.

"We recognize this has been a stressful experience and we remain dedicated to providing all the support we can and seeing you safely and expeditiously reunited with family and friends in the United States," the embassy said in a letter to the American passengers, posted on its website.

About 380 people aboard the Diamond Princess will be offered seats on the evacuation flight from Japan back to the United States, The Wall Street Journal reported Friday.

Japan will also cooperate with other countries that make similar arrangements to evacuate their citizens on the ship, government officials said. People from 56 countries and regions are on the ship.

More than a week has passed since the cruise ship, now with around 3,400 passengers and crew aboard, was put under a two-week quarantine at Yokohama Port after a passenger who disembarked in Hong Kong was found to be infected with COVID-19, the pneumonia-causing new coronavirus.

The number of infections confirmed on the ship expanded to 285, with the government newly reporting 67, including 38 who showed no symptoms such as fever.

The monitoring period for its passengers and crew will last through Wednesday.

Japan has increasingly confirmed COVID-19 cases from people with no direct connection to China, where the virus originated.

On Saturday, eight more cases were announced in Tokyo. Seven of the people boarded a party boat on Jan. 18, according to the metropolitan government. Earlier this week, two other people who were on the boat on the same day were found infected with the coronavirus.

In Wakayama Prefecture, western Japan, three more people, including a doctor, tested positive for the virus, the prefectural government said.

A total of five people related to a hospital in the town of Yuasa in the prefecture have now been confirmed infected -- two male doctors in their 50s, the wife of one of the doctors in her 50s, and two male patients in their 60s and 70s.

The number of infections confirmed in Japan grew to 338, including the 285 on the Diamond Princess.

"Now we're facing a different situation," health minister Katsunobu Kato told a press conference, referring to a rise in the number of cases where the route of infection cannot be tracked.

The Japanese government also said it will send a fifth chartered plane to Wuhan, the Chinese city at the center of the outbreak, on Sunday evening to bring home more Japanese and family members. The plane will return to Haneda airport on Monday morning.

On the Diamond Princess, passengers and crew have been complaining about deteriorating sanitary conditions, including no cleaning services and bedsheets that have not been changed for days. Some have also complained of being cooped up in windowless cabins.

With global attention increasingly focused on the situation, the Japanese health ministry said Thursday that it will allow medically vulnerable people, including those who are elderly with pre-existing health conditions, to complete their remaining quarantine period ashore.

According to the WSJ, American evacuees will likely arrive first at Travis Air Force Base in California, where they will undergo additional health screenings.

Some may remain at Travis, where they will face a mandatory quarantine of up to 14 days, while others may be moved to Lackland Air Force Base in Texas for quarantine.

A CDC team is on the ground in Japan to assess the health of the passengers. Those with a fever, cough or other symptoms will not be allowed on the flights, the newspaper said.