A Japanese woman who left the coronavirus-hit Diamond Princess cruise ship earlier this week was confirmed to be infected after returning to her home in eastern Japan despite an initial negative test result, a local government said Saturday.

She became the first person found to have been infected with the pneumonia-causing virus out of a total of 969 people who disembarked from the ship over three days through Friday. Following a two-week monitoring period through Wednesday, she had tested negative for the illness.

After leaving the vessel docked in Yokohama, near Tokyo, with her husband on Wednesday, the woman traveled to Tochigi Prefecture using public transport. She wore a surgical mask while traveling, according to the prefectural government.

Criticism is likely to mount against the Japanese government over its decision to make more than 3,000 passengers and crew stay aboard for two weeks for quarantine, as well as for not isolating from the public those who disembarked from the ship.

Earlier Saturday, the Ministry of Health, Labor and Welfare said it failed to test 23 passengers -- 19 Japanese and four foreigners -- during the two-week period.

"I deeply regret our mistake. We will do our utmost not to repeat a similar mistake," health minister Katsunobu Kato told reporters.

The Tochigi woman was not among the 23, according to the ministry. Kato added the 23 tested negative when the ministry checked them before Feb. 5.

In a related development, a total of 89 passengers who shared cabins with those found infected disembarked Saturday. It nearly completed work to get all Japanese passengers off the Diamond Princess after they tested negative for the virus, which originated in Wuhan, central China.

The 89, including 70 Japanese nationals, are now subject to further monitoring while staying at the National Tax College in Wako, Saitama Prefecture.

The cruise ship initially carried 3,700 passengers and crew from 56 countries and regions when it arrived in Yokohama earlier this month.

Aside from the 969 people, more than 600 who were diagnosed with COVID-19 or fell ill have been taken to hospitals in Japan.

While precise figures were not available, about 1,000 crew members and 200 passengers, including foreign nationals who were waiting for their home countries to pick them up by chartered flights and take them home, were believed to be on the ship as of Saturday. 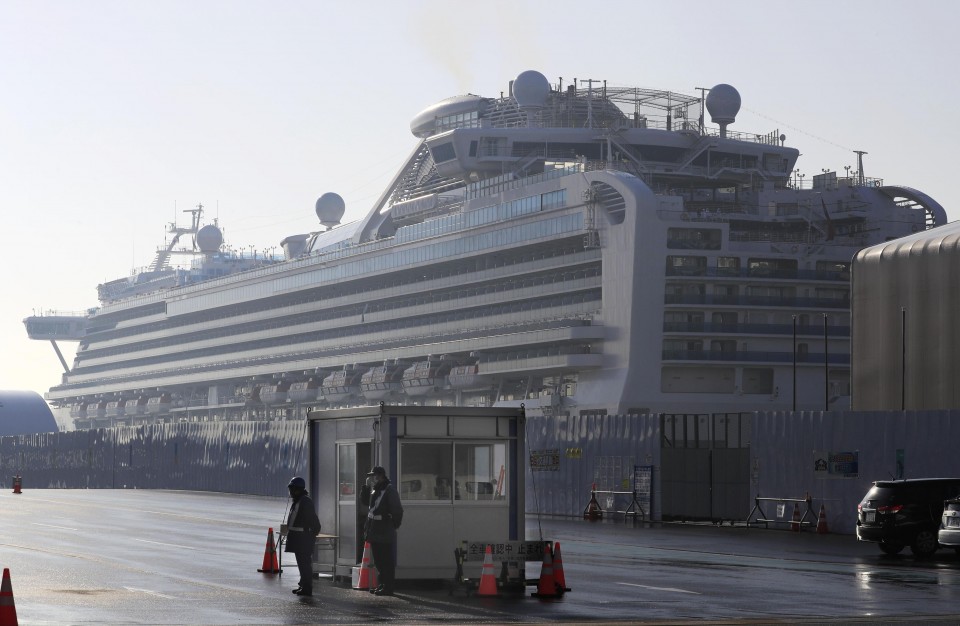 So far, 759 foreigners who were on the ship have left Japan on chartered flights arranged by their home countries.

Kato said the health ministry has confirmed that 25 foreign passengers -- 18 Americans, six Australians and one Israeli -- were infected with the virus.

The ministry is also considering taking the crew off the vessel, but to do so, it must make arrangements with the ship's operator that employs them.

The quarantine of the cruise ship began Feb. 3 after it made stops in Hong Kong, Vietnam and Taiwan as well as Japan's southernmost island prefecture of Okinawa.

Meanwhile, the number of people infected with the virus continued to increase in Japan. Among the cases, a teacher in her 60s at a junior high school in Chiba, east of Tokyo, tested positive, the city government said, raising concern the virus may have spread to schools.

He said the government will also start a clinical test for an anti-Ebola virus drug in March in the fight against the virus.

"We'll do everything we can," he said on a TV program, but noted there is no established treatment for COVID-19 yet.

Kato said the government will announce a basic policy on curbing the outbreak of the virus, possibly Tuesday.

The policy will be based on one Japan already has in place for a novel influenza, according to government officials.

So far, a total of 769 people have tested positive for the virus in Japan, including 26 found infected on Saturday. Most of the cases involved passengers and crew of the Diamond Princess.