When Carter Stewart and Japan's SoftBank Hawks agreed to a six-year, $6 million contract in 2019, it made news as the historic first such deal between an elite American amateur and a Japanese pro team.

Their deal began an experiment, which, if successful, could spark imitation, lure other amateurs here and fundamentally change Japanese pro baseball and its relationship with the major leagues.

Since teams from Japan's first pro league began competing in the spring of 1936, Japan's pro-establishment has hoped to be the equal of Major League Baseball someday. But because most of the world's elite players aspire to play in MLB, where the competition is higher and the top salaries dwarf Japan's, that gap has narrowed somewhat but remains substantial.

It is almost unheard of for a major league star to come to NPB in his peak earning years. Warren Cromartie did it in 1984 at the age of 30 because the Yomiuri Giants offered him nearly double the San Francisco Giants' $520,000 offer. But Cromartie has been the exception.

Because of that imbalance, MLB holds an edge in its negotiations with Nippon Professional Baseball. The posting system, which regulates the movement of players on NPB contracts to MLB, is a perfect example. MLB has twice modified it in 2013 and 2017. Both times Japanese clubs were forced to settle for less money in exchange for letting their players leave.

The lop-sided relationship could, however, become a lot more equal if American amateurs begin to see Japan as a real alternative to MLB. Stewart's contract is an example of how structural changes in MLB now allow Japanese teams to make superior offers.

The eighth player selected in MLB's 2018 draft, Stewart rejected a $2 million offer from the Atlanta Braves before turning his eyes to a vastly better offer from the Hawks. And though his circumstances were unique, nothing is stopping Japanese clubs from outbidding MLB teams for America's best amateur talent.

Some might scoff at that idea, given the huge resources available to MLB teams. But over the past eight years, MLB has severely restricted spending on amateurs.

In 2019, the highest amateur signing bonus paid by an MLB club was $8.1 million, the 10th highest $4.1 million, and amateurs are now required to sign minor league contracts that amount to little more than wage slavery. But even $10 million would not be beyond the grasp of an ambitious team like SoftBank, whose owner, telecommunications titan Masayoshi Son, wants to have the world's best team.

In addition to possibly getting more money upfront, playing in Japan offers another huge potential payoff: the chance for international free agency after six seasons.

In November 2025, Stewart, now 20, will have the opportunity to move to the majors as an unrestricted international free agent -- when virtually every major leaguer his age is still years away from getting anything approaching fair value for his services.

But that payoff will only exist if he, and other overseas amateurs coming to Japan, can learn to play at a high level while dealing with life in an unfamiliar country. 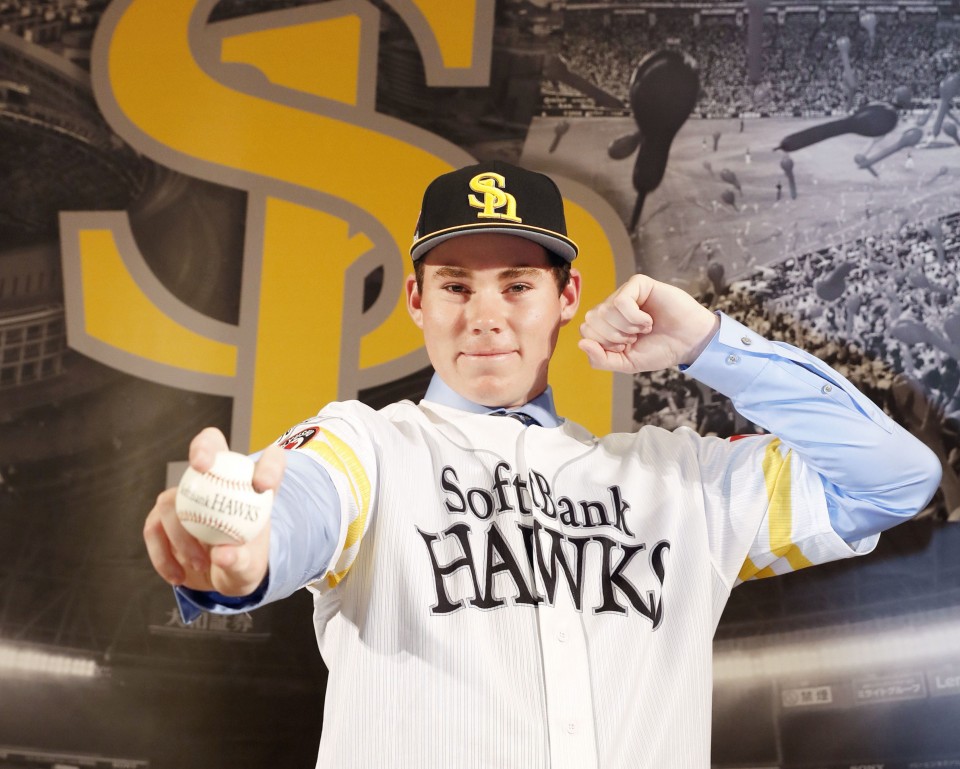 Adapting to Japanese baseball's regimented culture has proven too hard even for many experienced major leaguers. So how hard is it going to be for a young amateur?

Hawks scout Matt Skrmetta said youngsters like Stewart might have an advantage over pros who have experienced America's pro baseball culture.

"This (Japanese style) is what is normal to him (Stewart). He doesn't see the laziness (in American pro baseball) yet," Skrmetta said in December.

"Usually we get brainwashed by Major League Baseball, how good we are. We have a lot of pride. He's getting brainwashed this way before he becomes that way."

There are those, like former MLB general managers Dan Evans who have said Japan might offer more in terms of player development than MLB, especially in the area of raising young pitchers. Working and living conditions in Japan's minors are vastly superior to what novice professionals get in the United States.

Bobby Scales, an NPB veteran who manages player development as the Pittsburgh Pirates' field coordinator, said that while Japan has much to offer, simply working in a foreign country poses a challenge that could prevent a larger talent exodus.

SoftBank Hawks General Manager Sugihiko Mikasa is banking on Stewart making the grade. But even though the Hawks have Japan's best reputation for player development, he admitted it was no sure thing.

"For us, it is a very good challenge," said Mikasa, suggesting the process could bring valuable knowhow to his organization.

If the Stewart experiment is a success and other teams replicate it, overseas amateurs could begin streaming across the Pacific. Should that happen, Nippon Professional Baseball might finally eliminate its imported player restrictions.

Japan's 12 teams are each allowed only four imported players on their active roster. MLB Senior Vice President Jim Small has cited this rule as a fundamental reason for the power imbalance between Japanese baseball and the major leagues -- believing that once that brake is released, NPB could dramatically become more competitive.

NPB has also had two six-team leagues since 1958. But more and better overseas talent could add fuel to Hawks Chairman Sadaharu Oh's dream of expanding to 16 teams.

But to change an establishment that is set in its ways is going to require a spark. And though Stewart is just one ballplayer, he and the Hawks are undertaking a project that could change the face of baseball in Japan and the world by providing that spark.

"I feel a sense of responsibility," Mikasa said. "We want to succeed at this."