Some of the world's most famous sake breweries are looking to artificial intelligence to enshrine their time-honored techniques, and in the process are future-proofing their businesses as Japan contends with major demographic challenges.

Since April 2018, Asahi Shuzo Co. in Iwakuni, Yamaguchi Prefecture, has been working on a trial using predictive artificial intelligence created by Fujitsu Laboratories Ltd. The aim is to evaluate the practicality of using AI to optimize the control of equipment used in the sake brewing process.

With the aging of Japanese society, sake breweries must find ways to tackle labor shortages and maintain steady supplies of their products. But when it comes to the all-important taste test, humans will not be replaced.

Workers at Asahi Shuzo have been manually recording data in the process of brewing its top "Dassai" brand of sake for the past 30 years -- everything from times and dates, temperatures, and alcohol and amino acid content. AI-assisted sake brewing utilizes this real-world data to help the tech learn the ropes.

Dassai, described by the company as "a sake for sipping and enjoying, not simply for drinking or for the sole purpose of sales," gained recognition when Prime Minister Shinzo Abe presented a bottle of it to former U.S. President Barack Obama when the latter visited Japan in 2014. 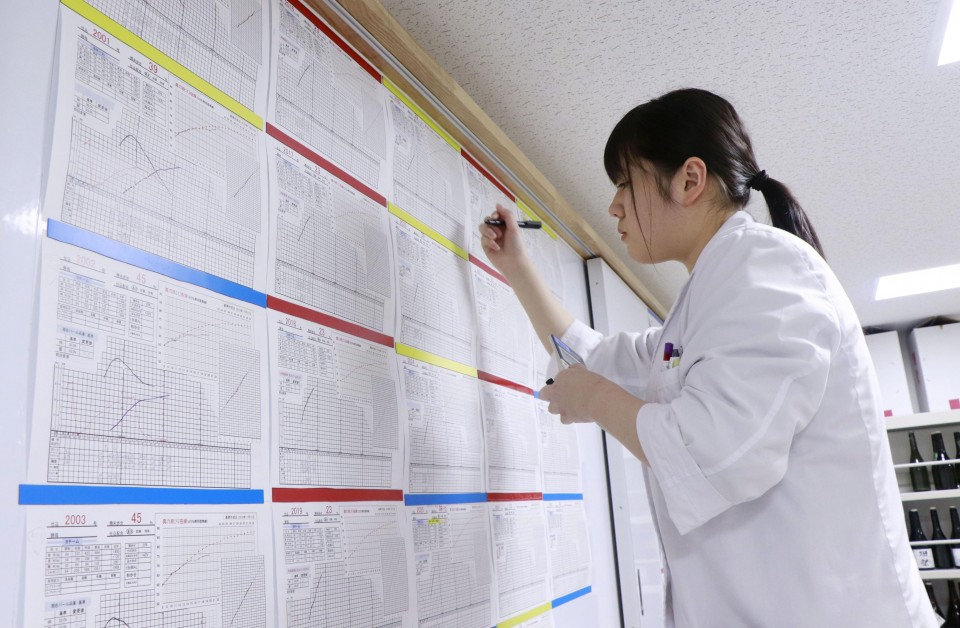 (An employee records data in the process of brewing Japanese sake at Asahi Shuzo Co. in Iwakuni, Yamaguchi Prefecture)

"I hope the data can derive clear clues as to the state of fermentation when satisfactory sake is produced," said Hidetaka Nishida, the company's master brewer, known as a "toji" in Japan.

Asahi Shuzo uses some 3,000 tanks in producing its annual sake output. "The state of fermentation differs in each tank. But even if the best possible figures set by AI are predicted, it doesn't necessarily mean that good sake will be produced," Nishida said, noting that, in the end, the balance of flavor is decided by human taste buds.

Production of sake involves the delicate process of steeping rice in water before it gets steamed. How much water should be used and how long rice should be steeped depend on the experience and intuition of each toji who closely watches changes in the color and swelling of the rice.

Nanbu Bijin Co., in Ninohe, Iwate Prefecture, in cooperation with an information technology firm, has focused on AI's capacity to find features from a huge number of images, hoping to figure out the best time to drain water in the steeping process by filming rice to ascertain the most suitable time for water absorption.

Images of the water absorption process are captured every few seconds and the data accumulated for analysis.

But "each kernel of rice varies in the pace of water absorption and how it splits," Nanbu Bijin President Kosuke Kuji said, admitting to the brewery's uphill struggle to develop an effective AI tool.

Nanbu Bijin, whose origins date back to the early 1900s, won the top sake title in the junmai category for its Nanbu Bijin Tokubetsu Junmai at the International Wine Challenge 2017. Junmai sake is made of only rice, koji (mold) and water.

To utilize AI in sake production, wide-ranging data, such as the production areas and characteristics of rice as well as amounts of water, need to be collected to reproduce the same brewing conditions, said Fujio Toriumi, associate professor at the Graduate School of Engineering at the University of Tokyo, an AI researcher who specializes in sake.

"The sense of taste is a complicated mixture of sweetness, acidity and other flavors," Toriumi said. "It is by no means easy to digitize the sense of taste that humans possess for flavor with the use of sensors."

Many years of experience are needed to become a toji. Both Asahi Shuzo and Nanbu Bijin are seeking ways of utilizing AI to foster skillful master brewers, but "would like to develop AI to partner with workers rather than replace them," Kuji of Nanbu Bijin said.