OPINION: Reflecting on peace, women rights during my recent visit to Japan

Visiting Japan in October 2019 reinforced my long-held conviction that we humans are in this life as together as ever. Obviously, the pursuit of human aspirations such as women's rights, peace, and security have no national boundaries.

I visited Hiroshima on Oct. 6, 2019, which coincided with the attack on Lemera Hospital in the eastern part of the Democratic Republic of the Congo (DRC) in 1996, where armed rebels from Rwanda killed at least 38 patients and three nurses at a time when the staff was already busy caring for about 300 patients.

Wherever peace and human rights are being threatened on our planet, we have the ultimate moral obligation to remember that national borders do not become boundaries of our humanity. The path to global peace lies in the lessons of our history as one human family. To this end, we should make sure that the tragedy that occurred in Hiroshima 74 years ago is not forgotten -- and, more importantly, is not repeated elsewhere, such as in the DRC, in any form. 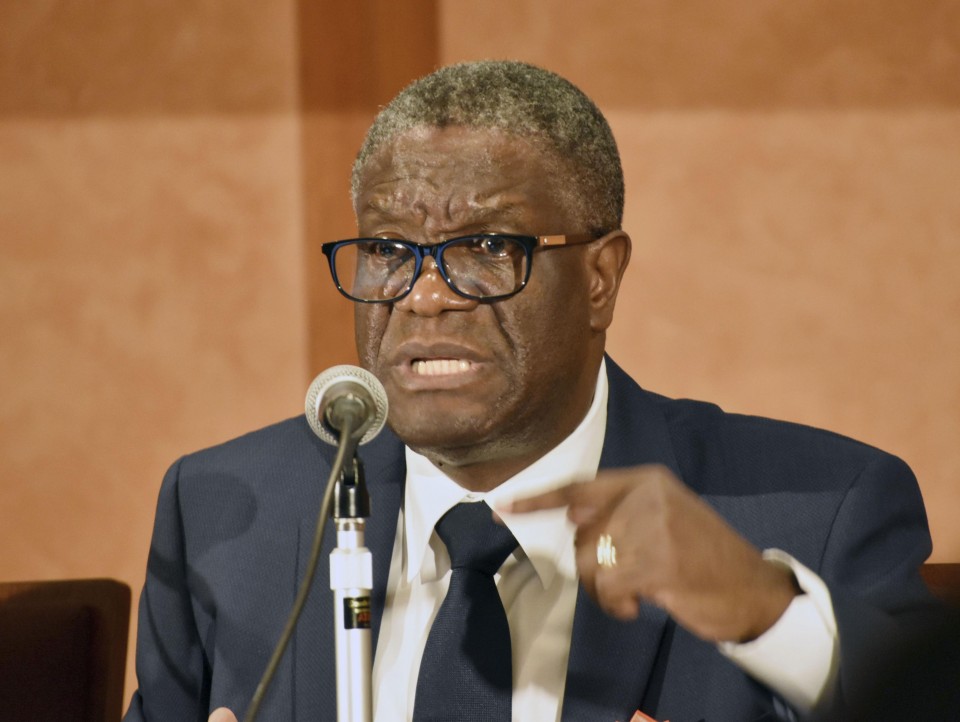 In Hiroshima I could see the lasting memory of the horror the city experienced in 1945. The atomic bomb dropped on Hiroshima is a testimony to the duality of human nature, in which love and empathy on the one hand coexist with cruelty, madness, and indifference on the other. My visit to the A-bomb Dome and Peace Memorial Park, and my interactions with survivors, or hibakusha, provided me with many illustrations of the unlimited suffering and destruction that people can impose on their fellow human beings.

Along with such observations, there also emerged a sense of admiration for the Japanese people, as they had been able to rise up out of the ashes of war even stronger than before and with enormous determination to rebuild their country. Learning from their experience against the terrible odds they faced further reinforced my determination to contribute to the emergence of a nuclear-free world as well as the rebuilding of peace and human dignity wherever these are being threatened, particularly in places such as the DRC, my home country.

It would be incomplete to evoke feelings about the A-bomb dropped in Hiroshima without pointing out that in two tragic ways the destinies of Japan and the DRC have been linked. The first link is through the raw uranium used in the fabrication of that atomic bomb, which was extracted from the DRC.

Another unfortunate and major link connecting Japan and the DRC is through what are known as "conflict minerals," more precisely coltan, which is widely used in the fabrication of key components of electronic devices. Japan is one of the world's electronic powerhouses, and thus its manufacturers are well connected to the related global value chains, which extend to the DRC.

Sadly, the extraction of this mineral has been associated with violence and widespread rape in the eastern part of the DRC. Much of the world's coltan, which is used in electronic devices such as mobile phones, comes from areas of conflict, mainly in the DRC.

Thus, to some extent we all bear some responsibility for the atrocities that take place in areas where coltan is extracted. Of course, the electronic devices themselves cannot be blamed for those atrocities. Rather, it is our silence that should bear the blame. Consequently, the ongoing tragedy in the eastern part of the DRC is more indicative of a crisis of our own humanity than of a humanitarian meltdown.

It is within the context of an economic conflict for the control of minerals imposed upon the people in eastern DRC for more than 20 years that rape as a weapon of war has been widely used. These barbaric acts have the effect of destroying the matrix of life -- the family, and the social and economic fabric -- and of traumatizing entire communities.

As a result, many people have been forced to flee from their land, leaving it to militia groups in their pursuit of capturing mineral fields. This economic war is at the root of insecurity and political instability that has resulted in the deaths of more than six million people since 1996.

Unfortunately, this cycle of violence, with its massive displacement of people and rape of women, is still going on, and it has also been fueled by a climate of impunity, corruption, and lack of accountability. Peace cannot be built on mass graves or on denial of truth and justice.

Almost 10 years ago, the Office of the U.N. High Commissioner for Human Rights published the Mapping Report documenting the most serious violations of human rights and provided a tally and evidence of 617 cases of crimes against humanity, and probably cases of genocide as well. Although the Report recommended the establishment of an international tribunal for investigation of crimes in the DRC, nothing has yet been done to implement this recommendation. Yet, justice is a prerequisite for building lasting peace insofar as it is not only the most effective mechanism for preventing crimes but also a crucial step in the process of healing for the victims.

In this connection, on Oct. 30, 2019, with my co-laureate of the Nobel Peace Prize, Nadia Murad, we have launched the Global Fund for Survivors. This fund provides reparations for rehabilitation and reinsertion programs in countries that have either denied their responsibility or cannot support the victims because of a lack of technical capability and/or a lack of the financial means to do so.

It is my strong conviction that peace and human rights should not be taken for granted. I believe that human beings everywhere should collectively fight for these pillars of human values.

Regardless of whether one visits memorials of human suffering such as the bombing of Hiroshima in 1945 or ongoing violence in the DRC, human tragedies reveal the same colorless tears. Even as we see the worst in humankind, we also have to fight and to display the very best of the human spirit. Hence the future of global peace demands that we fight first and foremost in the name of our common humanity rather than for narrower national interests.

(Denis Mukwege is a Congolese gynecologist who was awarded the 2018 Nobel Peace Prize for his contribution to the fight against wartime sexual violence. Mukwege set up the Panzi Hospital in 1999 in Bukavu, an eastern city of the DRC where he was born.)