South Korea is set to look into the health of every member of a religious group at the center of an outbreak of a new coronavirus in the country as it reported 144 new cases on Tuesday, bringing the nation's total infections to 977.

South Korea now has the single largest number of cases outside China, having surpassed Japan in terms of the number of cases even when including the hundreds found among passengers of a cruise ship in Yokohama.

South Korea's death toll from the COVID-19 outbreak has increased by two from the day before to 10.

South Korean President Moon Jae In visited the worst-hit city of Daegu in the country's southeast on Tuesday, to discuss with officials ways of dealing with the crisis, according to Yonhap News Agency. It also reported the country's Prime Minister, Chung Sye Kyun, visited the city to lead containment efforts and is expected to stay there for the time being. 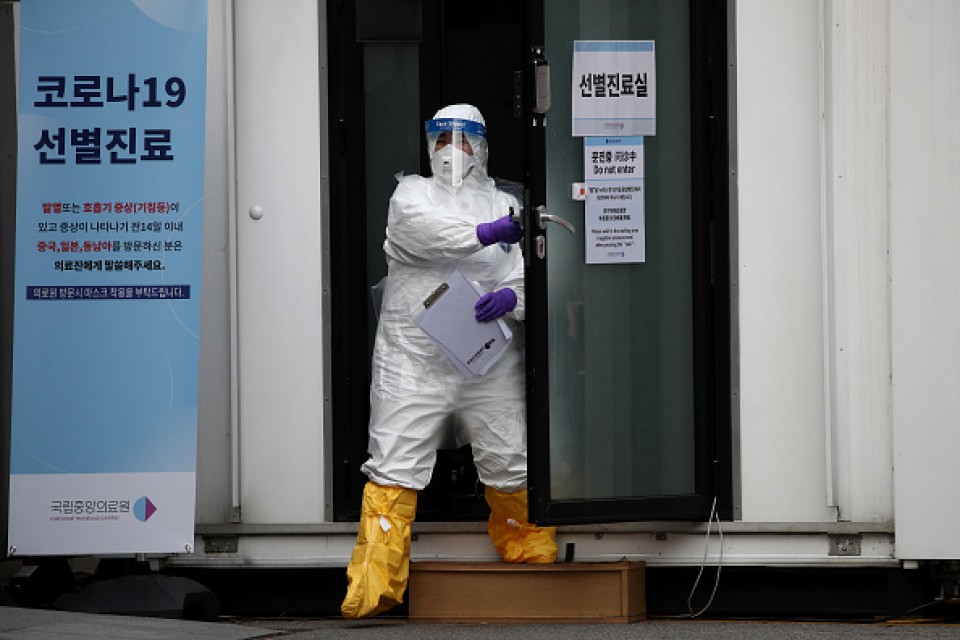 (A medical professional is seen at a preliminary testing facility at the National Medical Center where patients suspected of contracting coronavirus are assessed on Feb. 24, 2020 in Seoul, South Korea.)[Getty/Kyodo]

With South Korea put on the highest alert over the infection crisis, Japan's Foreign Ministry raised its travel alert for Daegu and neighboring county Cheongdo, which are at the center of the epidemic in the country. It is asking the public not to make nonessential trips to the region in South Korea's southeast.

As the virus spread to more parts of the country, the Busan municipal government said the world table tennis championships being planned in the southern port city in March will be postponed until June.

The South Korean government has agreed with the religious group, Shincheonji Church of Jesus, to be provided with its membership list, and will distribute the list to public health offices and municipalities across the country to look into the health of every member, the government said Tuesday.

The group had expressed concern about losing control of its members' personal data by submitting the list to authorities, but the government threatened to take legal action if the group refuses to cooperate voluntarily.

Founded in 1984, the group is said to have increased its membership in recent years, with the group claiming to have over 200,000 members.

The group's mass services, during which worshippers are said to be so close to each other that their shoulders rub, have been blamed for potentially spreading the virus.

A petition posted on the website of the office of President Moon Jae In calling for the group's dissolution has drawn over 600,000 supporters.