The Sunwolves fell to a disappointing 64-5 loss to the Queensland Reds at Brisbane's Suncorp Stadium on Saturday to fall to 1-2 in this year's Super Rugby competition.

Starved of possession, Naoya Okubo's team wilted defensively to allow the young Reds team, whose average age was just over 23, to run amok and record their highest-ever score in the competition.

"The Reds did what we wanted to do (to them) and kept us out of the game from the start," said Sunwolves captain Jake Schatz.

"They starved us of the ball so we will have to go back to the drawing board." 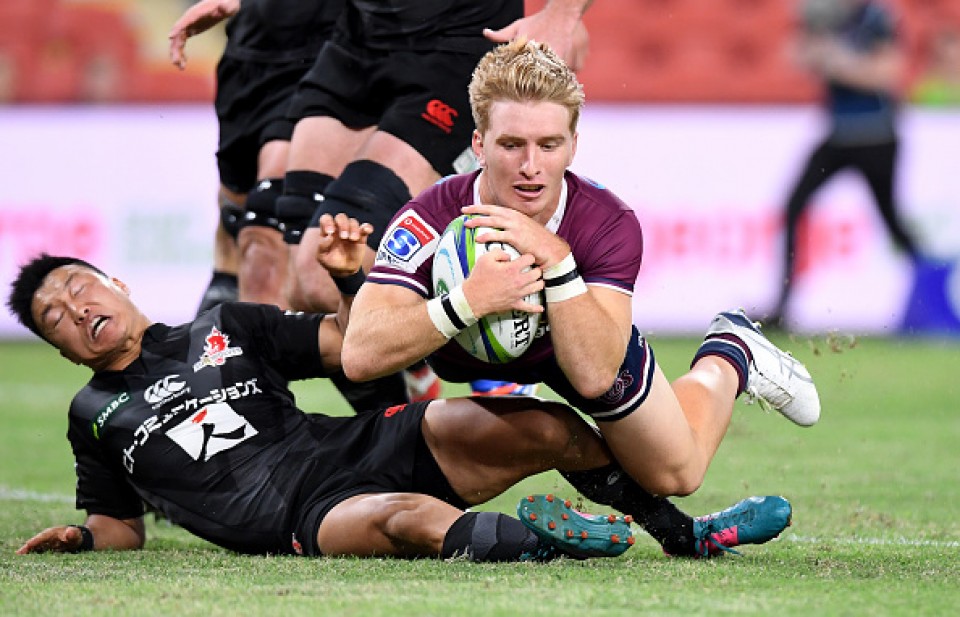 (Tate McDermott of the Reds)[Getty/Kyodo]

Early handling errors and some poor defense from the Sunwolves were ruthlessly exploited by the Reds as Liam Wright, Taniela Tupou and Hunter Paisami crossed in the first 15 minutes.

With the hosts' pack on top, Naoto Saito and Garth April had no front-foot ball to play with and the visitors struggled to get themselves into the game, not helped by a yellow card to Ben Te'o that allowed Tate McDermott, Lukhan Salakaia-Loto and James O'Connor to extend the lead to 36-0 at the break.

"We have been dreaming about that for weeks so to put it into action was awesome," Reds captain Wright said of the first 40 minutes.

The stats told story of the half with the Reds having carried for 567 meters to 145 by the Sunwolves, who missed 30 of their 93 tackle attempts and beat just one defender to 30 by the hosts.

Things did not get any better after the restart though, and an error from Saito allowed McDermott to bag his second shortly after play resumed.

Hamish Stewart brought up the half-century before the introduction of a number of Reds replacements saw the intensity of the game drop considerably.

Siosaia Fifita finally gave the Japanese fans in the stadium something to cheer in the 65th minute following a good kick pass from Keisuke Moriya.

But further tries from Josh Nasser and Isaac Lucas ensured it was a miserable evening for the Japanese franchise.