China said Monday it has extended the ongoing Lunar New Year holiday by three days until next Sunday in a bid to contain a new coronavirus that has stricken thousands in the country and spread overseas.

The death toll in China from the pneumonia-causing virus has risen to over 80 including a man in Beijing, while more than 2,800 cases of pneumonia caused by the virus have been confirmed, Chinese media reported.

The World Health Organization said Director General Tedros Ghebreyesus has arrived in the Chinese capital. He is expected to discuss the situation with Chinese officials.

Starting Monday, China banned all outgoing group travel abroad in an attempt to stop the virus -- which originated in Wuhan with a population of over 10 million -- from spreading globally.

The measure, taken in the middle of the holiday period during which millions go overseas, could have economic repercussions for countries that attract many Chinese tourists, including Japan.

The nation's health authorities have also urged people to refrain from going outside.

"Staying at home is best for the health," an official of the National Health Commission said at a press briefing in Beijing on Monday, adding the general public in China "should avoid going to public places" because there is a "risk of catching the virus." 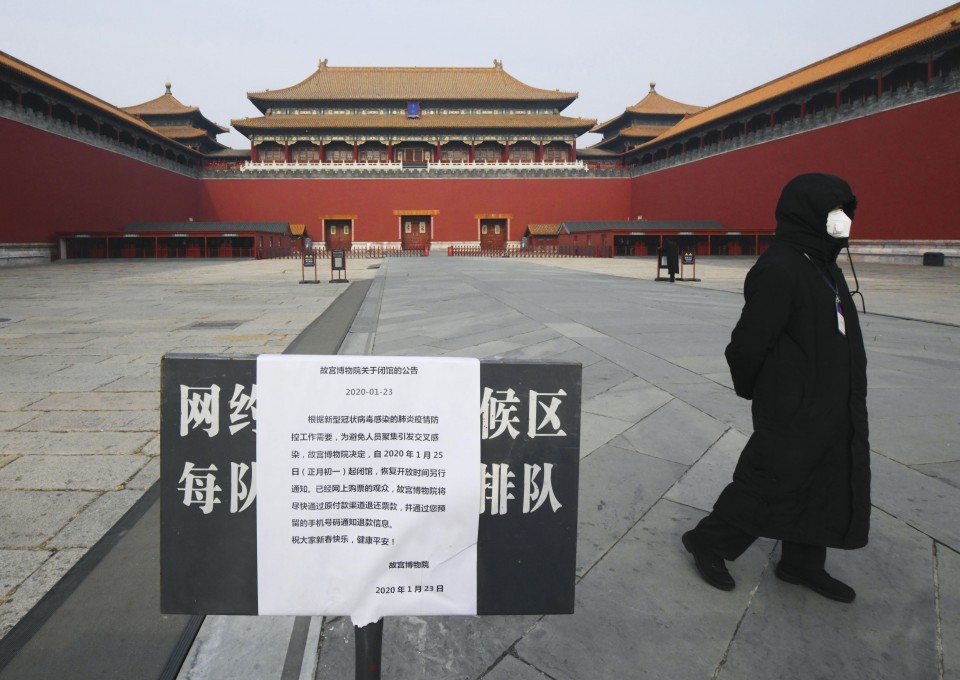 Another official of the health authorities indicated China may further extend the holiday, depending on how the situation develops over the remaining period through Sunday.

Companies and schools have been notified of the extension of the holiday, which began last Friday. The move reflects concern that the virus may spread further as people return to work and school after the holiday.

The Chinese government has warned the new virus strain's ability to spread is getting stronger, and that it is possible the number of infections will grow.

Municipal authorities in Shanghai, the biggest commercial hub in China, have decided to close companies, excluding those related to food and infrastructure, until Feb. 9 amid the outbreak of the virus.

A Japanese government source, meanwhile, said Monday that Japan will dispatch a chartered plane to Wuhan, possibly on Tuesday, to bring back those of its citizens who want to leave.

France has said it also plans to fly home this week, those of their nationals who wish to leave the city at the center of the outbreak.

The Hong Kong government said Sunday it would ban Wuhan residents from entering the semi-autonomous Chinese territory from Monday. The measure also applies to all people who have visited the central Chinese city in the past 14 days.

The number of confirmed coronavirus cases in Hong Kong rose to eight on Monday. Six cases have been confirmed in Macau, a Chinese territory nearby, state-run media said.

The province of Guangdong, which borders Hong Kong and Macau, issued a notice Sunday mandating people to wear masks in public places, such as hotels. Those who flout the measure will be subject to prosecution, according to reports.

The virus, which is believed to have begun spreading in Wuhan last month, has been found to transmit between humans. Cases have been reported across China, including in Beijing and Shanghai.

Infections have been confirmed in other Asian countries, Europe and the United States, as well as Australia. Japan announced a fourth case on Sunday.

It is known to cause fever, coughing and breathing difficulties. Its incubation period is about 10 days but can be between one and 14 days, according to China's National Health Commission, which added it can be transmitted to others before symptoms emerge.

Large amounts of the coronavirus were found in samples taken from a seafood market in Wuhan that also traded in wild animals, according to Chinese media.