South Korean President Moon Jae In said Tuesday there is no need for pessimism over stalled denuclearization talks between North Korea and the United States, and inter-Korean dialogue.

Speaking at a New Year's press conference, Moon said that while one cannot be optimistic about such engagements with the North, "we are not at the stage where we should be pessimistic."

Nuclear negotiations between North Korea and the United States remain stalled after their summit talks ended without an agreement in February, due largely to a gap between Washington's denuclearization demands and Pyongyang's calls for sanctions relief. 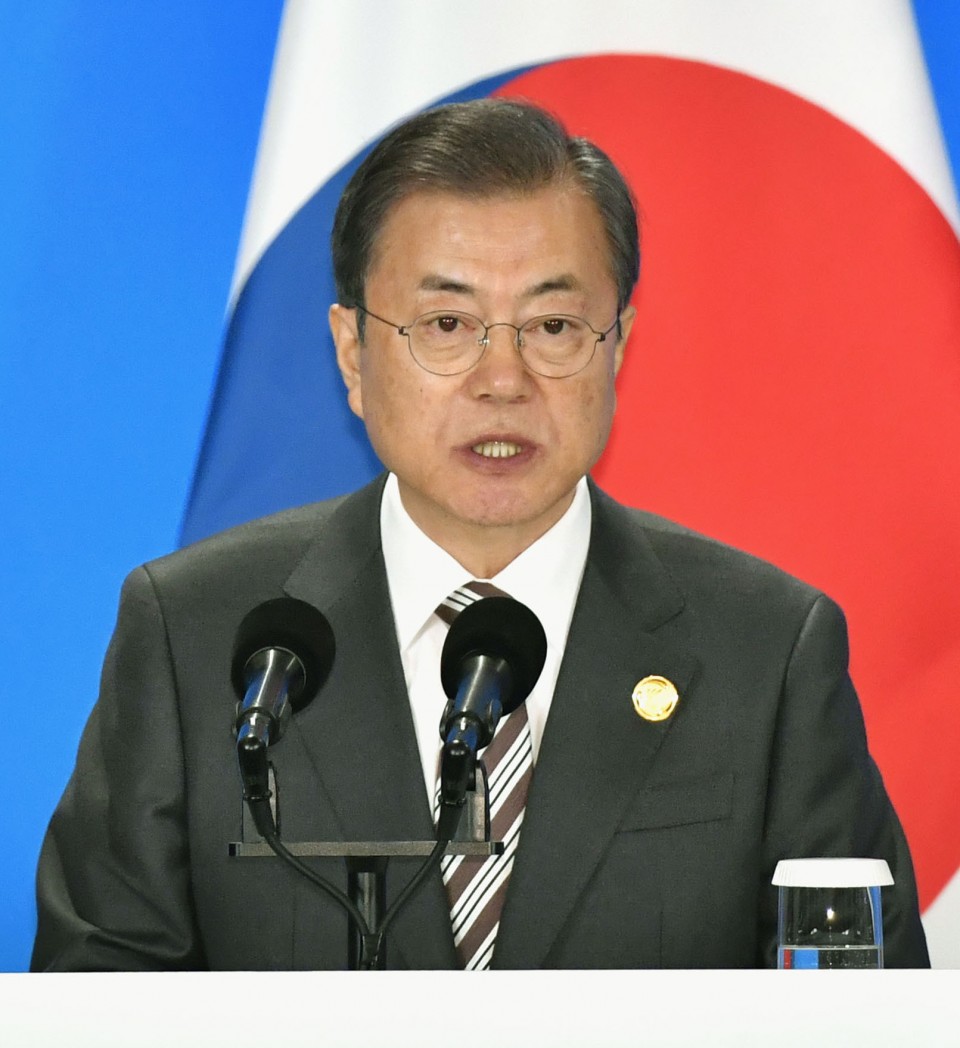 Kim Kye Gwan, adviser to North Korea's Foreign Ministry, said in a statement reported Saturday that the country will not resume denuclearization talks with the United States unless Washington fully accepts Pyongyang's demands.

Ties between North and South Korea improved as Kim and Moon held a series of meetings in 2018 and decided to work together on various economic cooperation projects.

But as U.S.-North Korea talks became deadlocked and no significant progress was made in inter-Korean projects, North Korea has stepped up criticism of South Korea and rejected dialogue between the two Koreas.

Moon expressed hope for expanding cooperation between North and South Korea, seeing as the North has not rejected such cooperation itself.

He said that even while international sanctions remain in place against Pyongyang, Seoul can still work with its northern neighbor on such areas as border-region economic cooperation, tourism and sports exchanges.

On the 2018 rulings, a major factor in the current chill in bilateral ties, Moon emphasized the need to come up with a solution acceptable to former Korean laborers, through negotiations between the two countries.

The president said both sides need to huddle together and present their ideas, asking Japan to propose a solution about the matter as South Korea has already presented a proposal of its own.

"The most important thing is to obtain victims' consent," Moon said. Without such consent, the matter will not be resolved even if the two countries reach an agreement, he added.

In 2018, the South Korean Supreme Court ordered some Japanese companies to pay damages to Korean plaintiffs over forced labor during Japan's 1910-1945 colonization of the Korean Peninsula.

The companies refused to comply, in line with the Japanese government's position that compensation issues were settled in a 1965 bilateral agreement.

South Korean courts subsequently seized some of the assets the companies had held in South Korea at the request of the plaintiffs, sparking concerns in Japan that the assets might be sold to compensate them.

Moon on Tuesday called for swift bilateral dialogue to resolve the dispute, saying that it could be just a matter of time before the assets are possibly sold.

He also said his government intends to take part in a proposed consultative body involving academics, politicians and business people from both Japan and South Korea that aims to explore a solution acceptable to former laborers.

On the Tokyo Olympics this summer, the president indicated that a high-level South Korean official would attend, but did not make it clear if that person was him.

As the wartime labor dispute festered, Japan in July placed stricter regulations on the export to South Korea of three key materials needed to produce semiconductors and display panels, and in August, removed the country from a "white list" of trusted trading partners.

Seoul saw the move as retaliation for the court rulings and took tit-for-tat measures. But recently, the two governments have shown signs they are willing to mend ties, with Japan relaxing export rules on one of the three materials in December.

North Korea may shy away from major provocations amid U.S.-Iran tensions