Rosita Harum said it was "the most precious moment" of her life when she was reunited with her former leprosy-sufferer father since being separated for 61 years due to a Malaysian policy that quarantined people with the disease.

Born to ethnic Chinese parents in the Southeast Asian nation, Harum, 66, was adopted by a Muslim couple. After her foster parents died, she began a search for her biological parents, and as a 59-year-old was surprised to discover they were both afflicted with leprosy. 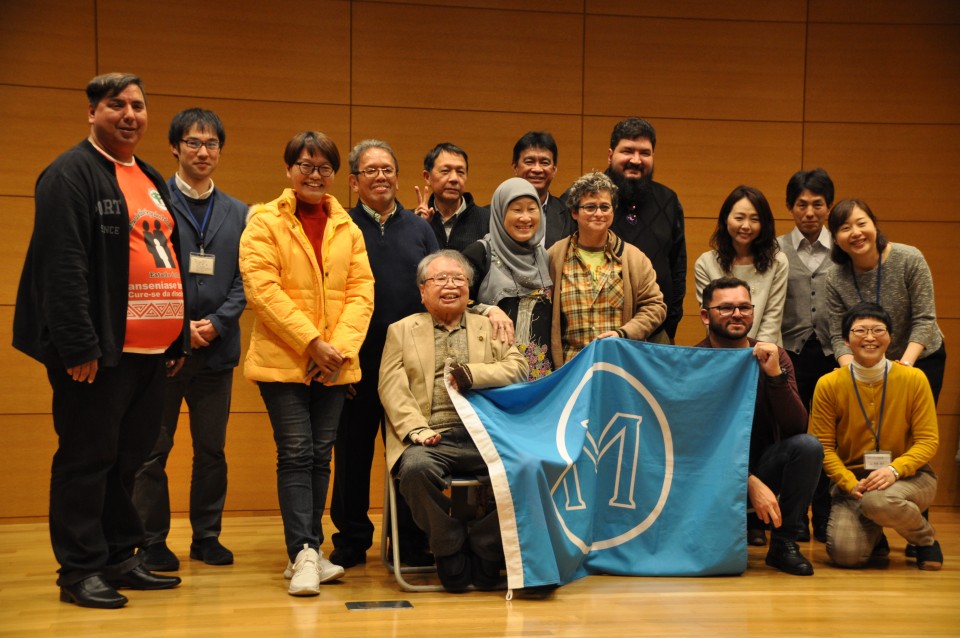 (A group of participants pose for a photo after an international symposium on leprosy problems on Dec. 14, 2019  in Higashimurayama, Tokyo.)

Two years later, she successfully met her biological father with the help of a nonprofit group supporting patients of leprosy, also known as Hansen's disease. Not too long after their meeting, her 95-year-old father died.

But Harum is something of an exception as many others who were similarly reunited with family had less enjoyable experiences.

Many other families of former leprosy sufferers still struggle to mend tangled relationships.

The isolation regime in Malaysia and many other countries was maintained for decades after leprosy was found to be treatable following the introduction of an effective drug in the 1940s. It was also discovered the disease is not as highly contagious as had long been thought.

Malaysia ceased forcibly quarantining those afflicted with leprosy in 1969.

In many countries, children and their leprosy-suffering parents were separated soon after birth and raised by nuns at orphanages or adopted by foster parents.

At a symposium in Japan, where a law to compensate families of the sufferers was enacted last November, family members from five countries shared their experiences of harsh discrimination and voiced hope that stigmas can be overcome.

In Japan, leprosy patients were forced into confinement in sanatoriums across the country under the leprosy prevention law that spanned nearly 90 years until it was repealed in 1996.

One month after a court ruling in May 2001 found the government's segregation policy unconstitutional, Japan enacted a law to compensate former leprosy patients.

Hwang Gwang Nam, a 64-year-old ethnic Korean resident of Japan who played a key role in a 2016 lawsuit seeking state compensation for family members, has said the latest legislation is significant if it helps mend long-strained ties.

He was sent to an orphanage in 1956 when he was 1 after his leprosy-suffering parents and sisters were confined to a sanatorium in western Japan.

After eight years apart, his now-cured parents came to the facility to pick him up so they could re-start their lives together, but he was conflicted because he had completely lost touch with them.

"I just thought, 'why do I have to live with these people?' when I met my parents because I could not remember them," he said at the symposium held in Tokyo, hosted by Japan's National Hansen's Disease Museum.

Elson Diaz, a 37-year-old son of Brazilian leprosy patients, said he was "certainly encouraged" by the latest Japanese legislation. He is a member of Morhan, a nonprofit group supporting people affected by leprosy in the South American country.

Children of sufferers in Brazil sued the federal government in 2017 seeking damages for those who were forced to live apart from their parents under the segregation policy that was in place until the late 1980s, Diaz said.

"After the federal law produced the separation of thousands of families, there was (no) proper treatment," Diaz added.

Besides Japan, countries of the speakers at the symposium -- Brazil, Portugal, Malaysia, the Philippines -- have not implemented legislative measures to provide redress to relatives of those afflicted with leprosy, though the Brazilian government paid compensation for former patients.

Fatima Alves, a 57-year-old Portuguese woman, shared her devastating experience of being separated from her leprosy-suffering parents immediately after her birth.

"I was sprayed with cold water in a shower room at an orphanage for punishment for playing pranks," Alves recounted.

She was forced to work for a living at the age of 13 when she was kicked out of the leprosy colony, taking a job as a maid at her aunt's house.

"I was deprived of all rights as a child. I just want one word of apology from the government," she said.

At the closing of the two-day meeting, Hwang concluded the session by explaining a lesson he learned from his experiences.

"Each of you must have the courage to raise your voice when you feel something is strange, whatever the authorities say," he said.

"This is not only for the case of Hansen's disease, but possibly applies to all matters in the society."