The Hiroshima High Court on Friday revoked a lower court decision and ordered Shikoku Electric Power Co. to suspend a reactor in western Japan, dealing a blow to the government's bid to bring more reactors back online after the 2011 nuclear crisis.

The ruling marks the second time that the high court has ordered a halt of the No. 3 reactor at the Ikata nuclear power plant in Ehime Prefecture.

In making its decision, the court considered whether the operator and the Nuclear Regulation Authority's rules and risk estimates for an eruption of Mt. Aso, about 130 kilometers away, were adequate.

"Research on the active fault is insufficient and the Nuclear Regulation Authority's judgment that it is not a problem is incorrect," Presiding Judge Kazutake Mori said in handing down the ruling.

"(Shikoku Electric) needs to also take into account less than catastrophic eruptions at the caldera of Mt. Aso," he said. 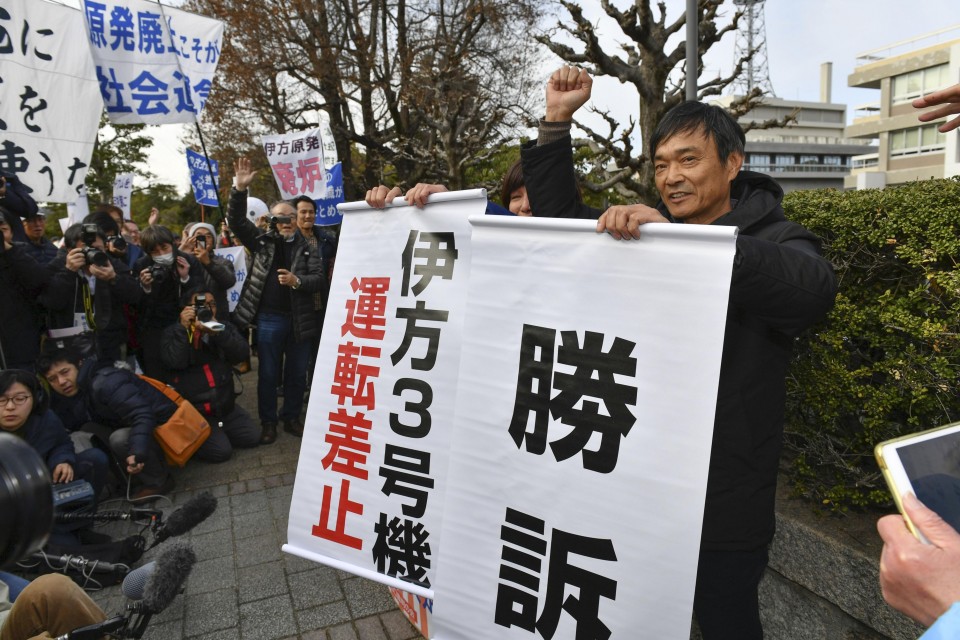 (A banner reading "victory" is shown in front of the Hiroshima High Court on Jan. 17, 2020, after the court revoked a lower court decision and ordered Shikoku Electric Power Co. to halt the No. 3 reactor of the Ikata nuclear power plant in Ehime Prefecture.)

Three residents of nearby Yamaguchi Prefecture were appealing a decision last March by the Iwakuni branch of the Yamaguchi District Court. The lower court ruled the plant could continue operations since the possibility of a large-scale eruption occurring during the reactor's operating life was low, and the regulatory authority's safety standards were adequate.

A previous order forcing a halt to operations was issued by the Hiroshima High Court in December 2017, citing the risk of an eruption of Mt. Aso. The same high court overturned the decision in September 2018 on appeal and the utility restarted the reactor a month later.

"It would not be an exaggeration to say that this is a sweeping victory," said Satoru Nakamura, the lawyer representing the plaintiffs.

Nobuko Kubota, 58, one of the plaintiffs who filed for the injunction, said with tears in her eyes, "I express my respect for the judicial system. If an accident were to occur at Ikata, we would lose our rich fishing spots and a place to live."

The reactor is currently idled for scheduled inspections and was expected to be restarted on April 27, but it is unlikely to be reactivated as planned following the latest ruling, the utility said.

"The ruling is deeply regrettable and not one we can possibly accept," Shikoku Electric said in a statement, adding that it plans to immediately file an appeal.

The utility also said it had presented detailed evidence that the plant had sufficient safety measures for earthquakes and volcanoes "based on the latest scientific knowledge."

The government of Prime Minister Shinzo Abe is pushing for the reactivation of nuclear reactors under stricter safety rules introduced after the 2011 Fukushima nuclear disaster.

It has set a target for nuclear power generation to account for 20 to 22 percent of the country's electricity supply by 2030, after the Fukushima crisis led to a nationwide halt of nuclear plants.

"There is no change to the government's policy of reactivating" reactors that meet the new safety standards, industry minister Hiroshi Kajiyama told reporters.

But others at the ministry expressed concern about the implications of the ruling, saying members of the public fail to understand that nuclear power is a necessity for Japan.

"It's not just a matter of it being OK (to suspend a reactor) because it is currently idle," a senior ministry official said.

The utility estimates the shutdown of the reactor past April will raise fuel costs for its thermal power generation by 3.5 billion yen ($32 million) per month as nuclear power generation can produce electricity at lower cost. The previous suspension order cut its profit by 33 billion yen.

Ikata Mayor Kiyohiko Takakado said in a statement that there was "no choice but to accept (the ruling) as truth," expressing doubt about the future of the reactor.

"I fear that the repeated unscheduled suspension and restarting (of the reactor) due to judicial rulings will have an impact on its safe and stable operation," he said.

Ehime Gov. Tokihiro Nakamura said he would "seek measures from Shikoku Electric and the government that comply with what is considered necessary to protect the safety and peace of mind of prefectural residents."