Orthodontist Yuki Miyajima believes that Japanese have long been too tolerant of the sometimes crooked ways of teeth.

The good news? He says more and more Japanese are seeking out that winning smile achieved by straightening up -- and can improve their health and even English pronunciation by doing so.

Miyajima, 39, who calls himself a freelance orthodontist, has written a Japanese book on the subject loosely titled in English: "'Polish' your teeth rather than your English to become cosmopolitan! Dental care for being active globally." 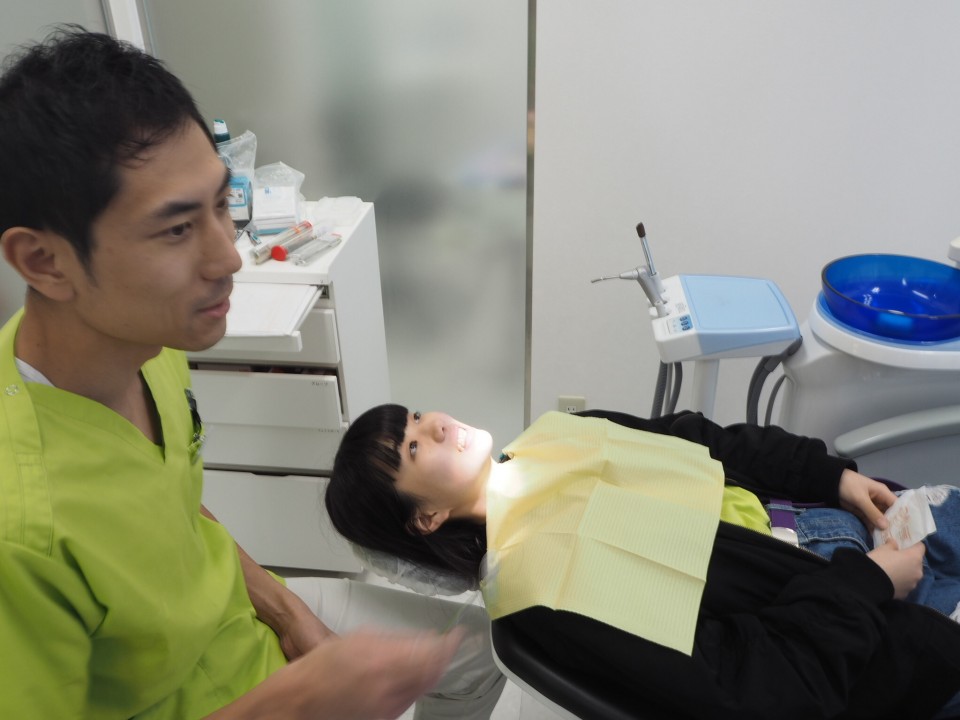 The Nagoya native, whose parents are both dentists, says he has made it his "life's work" to get more Japanese adults and children to straighten their crooked teeth through orthodontic treatments.

Instead of awkwardly covering their mouths when laughing or displaying bashful grins that might be mistaken for timidness, he wants Japanese to radiate big, confident smiles.

"In general, Japanese really don't want to show their teeth to other people, but this has more to do with culture than whether their teeth are bad or good," Miyajima, who has business tie-ups with 11 dental clinics around Japan, said in a recent interview with Kyodo News.

Miyajima, who lives in Tokyo, vividly remembers the dazzling smiles and pearly whites of the people he would see when he would visit the United States at Saint Louis University where his father was teaching orthodontics as a visiting professor.

He recalls as early as elementary school, having chosen his career path. Although he was born into the home of an orthodontist father and general dentist mother, both parents encouraged him to become a doctor, not a dentist, he says.

"But my parents' dental clinic was right next to my home, and I'd see how patients would leave with these bright smiles on their faces. I saw that I could help make people happy and also earn a respectable living, and chose this path."

In his book published in 2017, Miyajima cites a 2012 survey by a U.S. affiliate of a Japanese manufacturer of 3D scanners and transparent mouthpieces used in orthodontics.

Three-quarters of the respondents of the survey done on expatriates had bad impressions of Japanese teeth. What's more, 83 percent of those surveyed thought having straight teeth contributed to a winning smile.

In a section of the survey where respondents give more wide-ranging opinions, one American man in his 30s marvels at how bad Japanese teeth are, despite the high level of health consciousness typically observed among Japanese people. He adds he is shocked to see many celebrities on TV with "badly crooked teeth."

Based on a 2010 nationwide survey by the Japanese Association of Orthodontists of 1,000 males and females between the ages of 10 and 50, about half of Japanese lacked confidence in their teeth. But despite a reluctance to get braces, a majority of them said teeth determine first impressions, and that those with straight teeth exude a sense of cleanliness, health, and good upbringing. 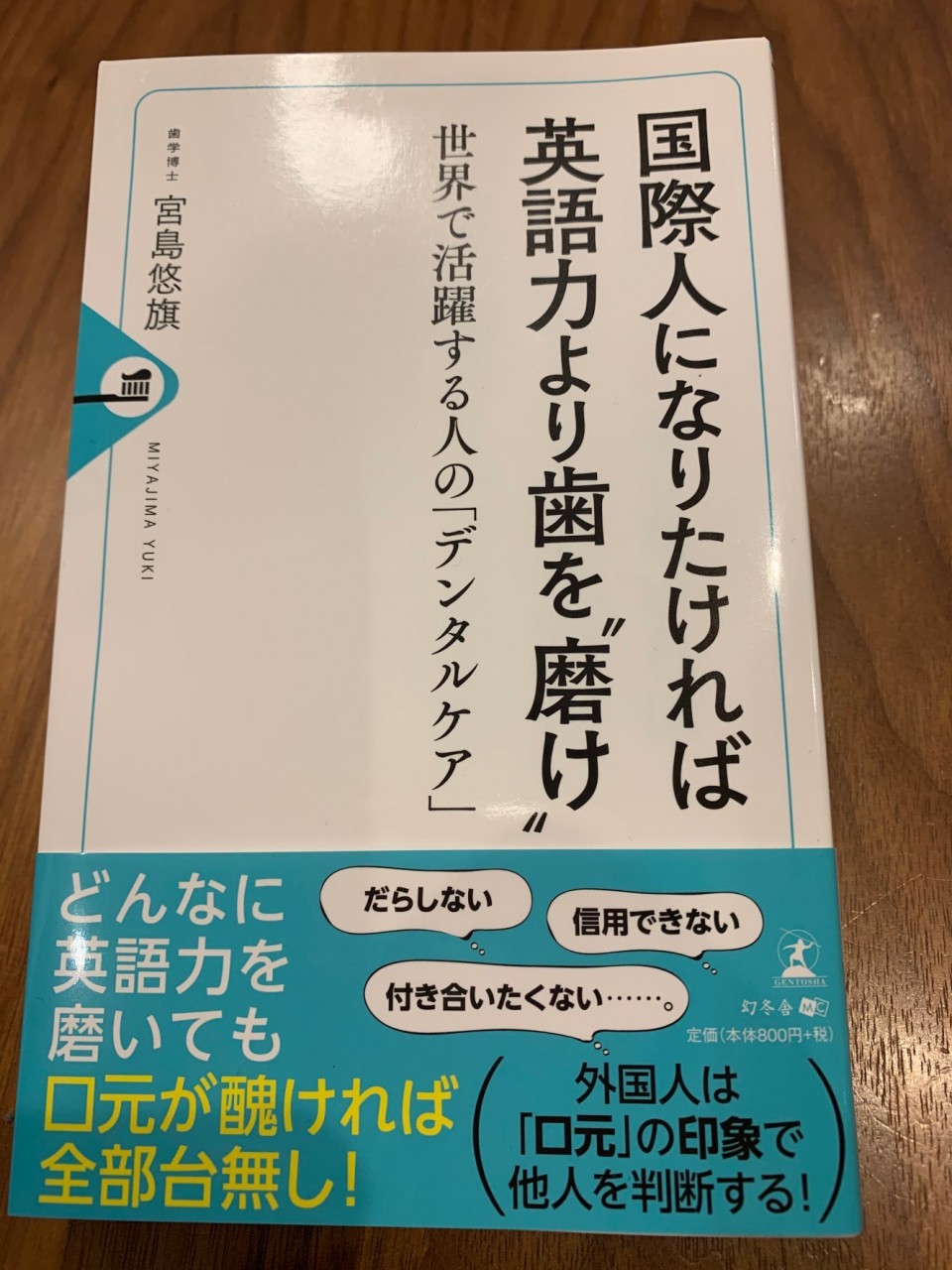 (Orthodontist Yuki Miyajima has written a book, loosely titled in English: 'Polish' your teeth rather than your English to become cosmopolitan! Dental care for being active globally.')

As Miyajima explains in his book, there is a historical context for Japanese having been so clueless about teeth because of the custom of "ohaguro," or teeth blackening, which was seen as a status symbol among aristocrats until the end of the Meiji period in 1912.

Ohaguro, the dye for which was made by dissolving iron filings in vinegar, was widely used by married women in the Edo period as it was considered beautiful and modest to mask one's teeth.

Tooth brushing using a powder containing salt-- mainly to keep teeth white and prevent bad breath -- came into vogue among Edokko (Tokyoites) in the early decades of the 19th century, "but people were surprisingly tolerant of bad teeth alignment," Miyajima writes. In fact, the word for snaggletooth, "ranguiba," literally disorderly tooth stakes, appears as a description in a comic book of the era.

"Because of this cultural history, no one really cared much about whether teeth were bad or good or what people thought about their teeth. That's one of the reasons why Japanese haven't taken the trouble to fix their teeth until recently," Miyajima said.

Dr. Sayo Shimizu, director of a dental clinic in Tokyo's Setagaya Ward that specializes in children's orthodontics, has recently seen a remarkable increase in the number of child patients, she says.

Shimizu, who is not associated with Miyajima, says the reasons parents give for bringing children to her clinic include other kids getting braces or because they've been told their kids have malocclusions in school health checkups.

A trend of Japanese wanting to correct their teeth started around the time of a health ministry survey of dental patients conducted in 2011, in which 44 percent of people aged between 12 and 20 complained of tooth crowding, Shimizu says.

"Yaeba," or fang-like upper canine teeth that men have considered appealing in women, are caused by such crowding, according to Miyajima, who says naturally small jaws as well as a change in eating habits in Japanese exacerbates the crowding problem.

"Japanese jaws are naturally smaller than Western jaws but eating softer foods in childhood, such as school lunches, has also led to underdeveloped jaws." But because nutrition in baby food has also improved, "teeth have also become larger. When these canines come in, there isn't enough space for them to emerge," he said.

Even though there was a fashion trend circa 2013 which saw teenage girls paying to have yaeba artificially attached to their real teeth, Miyajima believes that in the West, yaeba are considered "vampiresque" and, at the same time, infantile.

"At a bare minimum, Japanese should understand good teeth alignment as a global standard of personal grooming and social etiquette to engage with people from abroad," he said.

Miyajima says children benefit from braces because bones in the upper and lower jaw are more pliable. He applies a pre-orthodontic mouthguard called Myobrace, which trains the mouth muscles and tongue and promotes correct swallowing and breathing through the nose, often without the need to use braces.

"There is an excellent chance of getting ideal teeth alignment without having to remove any adult teeth. Correcting teeth that jut out allows kids to close their mouths and breathe properly through their nose to receive more oxygen and enhance physical and mental fitness."

Miyajima lists several reasons why bad teeth cause health issues -- for example, tooth decay because of a tendency for people to develop cavities and gum disease, susceptibility to sleep apnea, and problems with foul breath from bacteria that persists between crooked teeth. It can also negatively impact self-esteem, he says.

He even points out that the correct enunciation of words, in general, and particularly the "s" and "th" sounds in English, become more challenging if teeth are knotted or gapped.

Miyajima has been treating Kaho Yamaguchi, a 12-year-old elementary school student, who has been coming to the Kalmia Dental Clinic run by director Ryosuke Sugihira, 41, in Tokyo's Sumida Ward, for about two years. 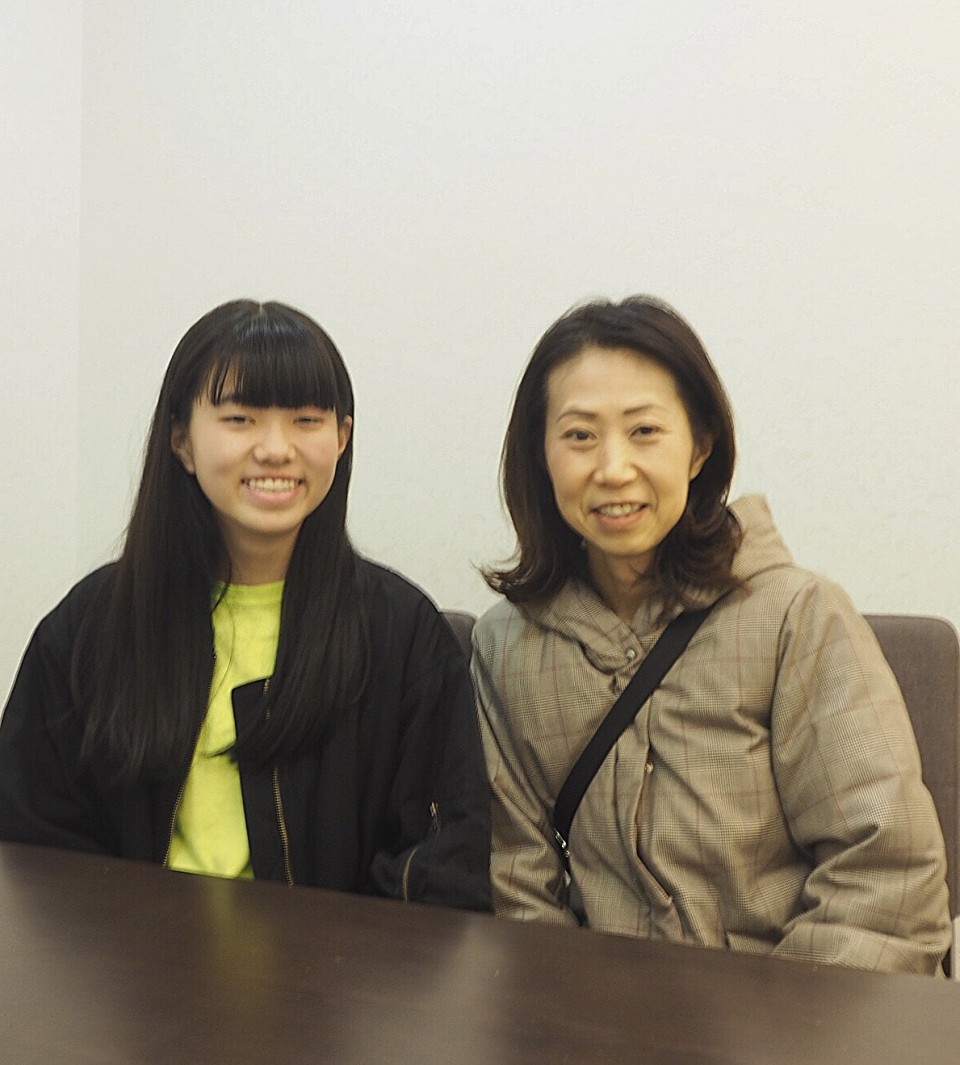 (Kaho Yamaguchi and her mother Keiko)

Keiko, Kaho's mother, says she decided to bring her daughter to the clinic because there was an orthodontist specialist on-site.

Kaho, who wears a clear mouthpiece brace instead of conventional silver wires, says she feels more confident about smiling since correcting her protruding bottom teeth. "I wanted to have straight teeth. My smile has become more natural now," said Kaho, who hopes to become a dancer when she gets older.

Miyajima and Sugihira work hand in hand in what they describe as team medicine.

"In Japan, when patients have a problem with their teeth, they usually go to a general practitioner dentist, no matter what the problem is, including for orthodontic work," said Sugihira.

"But all dentists have their strong and weak points, so there is a tendency for treatments to be half-baked and unsatisfactory for patients in such cases. Since Miyajima is an orthodontic specialist, he can provide the highest level of treatments in his field. This way, we don't have a situation where we perform treatments we aren't good at," he continued.

That is also why Miyajima chooses "freelance" work, he says. If he were to open his own clinic, the dental specialists' team would not be in place.

"I get teeth to their ideal alignment before other specialists do procedures like crowns or dentures. If your teeth last long, your body's overall health also lasts. I chose freelance since I can go to various locations to perform team medicine."

Costs for Miyajima's orthodontic treatments are not covered by Japanese health insurance, and can range anywhere from 400,000 yen ($3,650) for elementary school students to upwards of 1 million yen for junior high school students and adults. There are also separate costs for follow-up visits.

In contrast, patients bear only 30 percent of medical costs of general dental treatments through national health insurance, as opposed to many other countries where dental care insurance is excluded. Treatments at dentists' disposal, however, are limited under the current insurance system.

Contrary to a long-held belief in Japan that "personality is more important than how one looks," Miyajima thinks that appearance, including teeth alignment, can influence a person's life or career.

In his book, he cites several economic studies that conclude that, generally speaking, people considered attractive earn more or are more successful than those who are not. But the evidence is unclear when it comes to teeth.

Shimizu, the orthodontist from Setagaya Ward, said, "There are perspectives from abroad about the bad teeth alignment of Japanese people. Although yaeba were seen as attractive long ago, these days, even celebrities with yaeba and other malalignments are getting their teeth corrected, and more of my patients want to get braces." 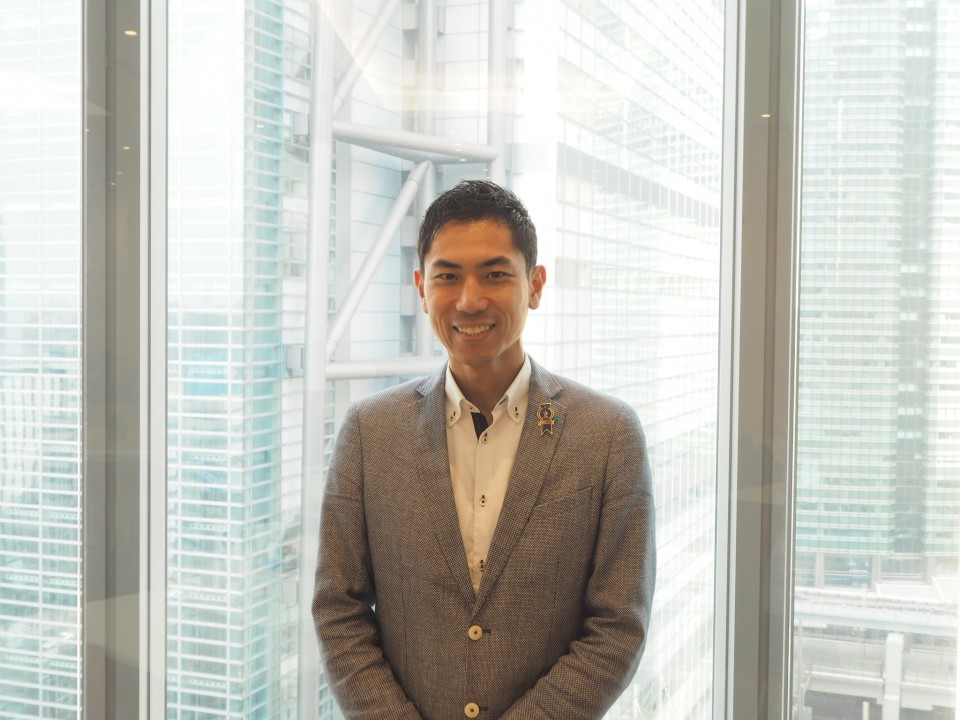 Miyajima, who has appeared on Japanese TV to promote his "bright orthodontics" brand as a way to make people aware of how teeth alignment can affect overall health, blogs about how he is glad to see movements about improving teeth on social media, such as over 10,500 Instagram posts with the hashtag #shiretsukyoseijoshi (girls with straightened teeth).

Young Japanese women share their before-and-after photos of orthodontic teeth alignment, and in most cases the difference is quite striking, showing off the broad ear to ear smiles Miyajima hopes to see splashed across the faces of many more Japanese.

"This really makes me happy that these women are proud to show off their teeth. My dream is to get Japanese people to have the same level of awareness about teeth alignment as people in America and the West. Providing people with the proper information on dental care is how I will continue to work toward this goal."