An international group of geologists on Friday formally adopted the name "Chibanian" for a geologic age spanning 770,000 to 126,000 years ago, researchers said, marking the first time a Japanese name has been chosen.

The term means "Chiba age" and is derived from a geological stratum discovered in Chiba Prefecture, east of Tokyo. The name was adopted at an executive meeting of the International Union of Geological Sciences in Busan, South Korea.

A team including researchers from Ibaraki University and the National Institute of Polar Research filed for registration with the scientific group in June 2017. The filing subsequently cleared multiple screening processes, while beating out two locations in southern Italy that were vying to give their name to the period.

"We've managed to get there in the end and I'm full of emotion," Makoto Okada, an Ibaraki University professor and a member of the team, said at a press conference. "Geological layers tell us a lot if we listen in to them. We'll keep delivering information so I hope people will go there and have a look." 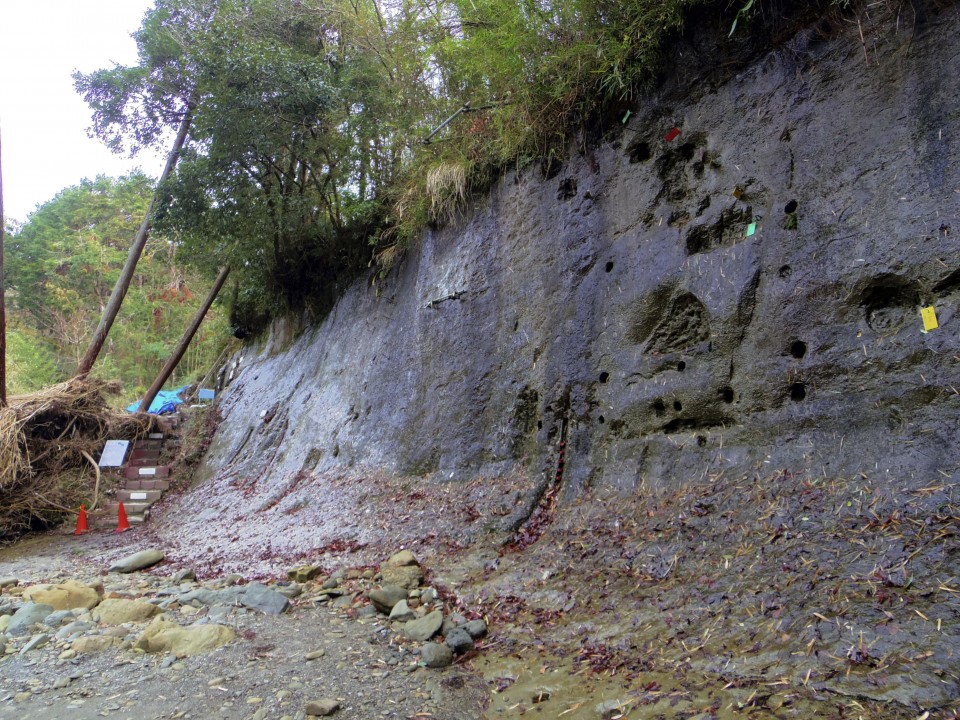 (Geological stratum in Chiba Prefecture, east of Tokyo, from which the name "Chibanian" for the geologic age spanning 770,000 to 126,000 years ago derives)

The Chiba stratum is exposed on a cliff in Ichihara, along the Yoro River on the Boso Peninsula. In the stratum, minerals found in good condition clearly show that the last known reversal of the Earth's magnetic fields -- the switching of north and south magnetic poles -- occurred 770,000 years ago.

The team's bid for registration also encountered opposition from a group in Japan that alleged the team had used fabricated data, leading to a suspension of the deliberation process. But screening later resumed after the team's case was deemed scientifically sound.

"It's the result of the Japanese team's efforts at meticulously accumulating pieces of evidence," said Hiroshi Nishi, a micropaleontology professor at Tohoku University. "There were twists and turns but IUGS recognized the Japanese team's data as scientifically correct and most appropriate. It's a huge contribution to the progress of Japanese geology."

The government and local residents also welcomed the news, hoping to see a surge in the number of visitors there. The local city government said it plans to set up facilities to invite more tourists to visit the site.

"We feel responsible for being in charge of something rare even in the entire world," said Ayumi Ishii, a 62-year-old tour guide for the site.

Chief Cabinet Secretary Yoshihide Suga said he hopes this encourages many people, including children, to get more interested in science.