The Japanese government on Thursday called on the International Criminal Police Organization to request the Lebanese government to detain Carlos Ghosn, the 65-year-old former Nissan Motor Co. chairman who jumped bail and left Japan where he was facing a trial for alleged financial misconduct.

Earlier in the day, Japanese prosecutors searched a house in Tokyo where Ghosn resided before staging a dramatic escape from Japan as they sought to determine how the former auto tycoon fled to Lebanon to escape what he claimed is a "rigged" Japanese justice system.

In cooperation with police and immigration authorities, prosecutors have launched a probe into Ghosn's escape, believing the former chief of the Nissan-Renault auto alliance violated the immigration control law as there is no record of his departure. 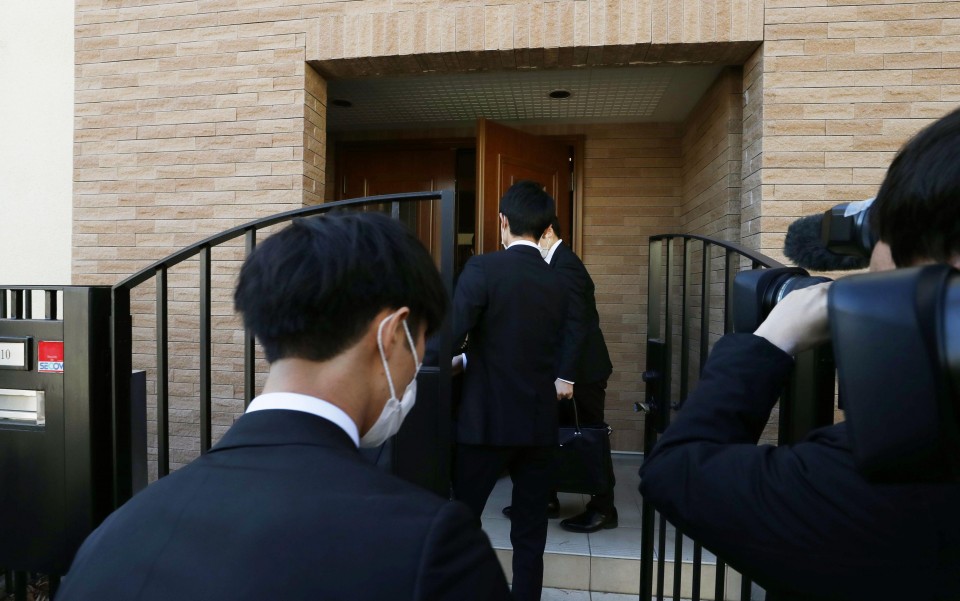 (Prosecutors search a house in Tokyo where Carlos Ghosn used to live before he staged a dramatic escape from Japan.)

Lebanon has no extradition treaty with Japan and is considered unlikely to agree to hand over Ghosn.

It has also come to light that Ghosn possessed two French passports and was allowed by a Tokyo court to keep one in a locked case, according to a source with knowledge of the situation.

Initially, Ghosn's defense lawyers kept all four of his passports -- two French, one Lebanese and one Brazilian.

But after he was released on bail, the need arose for Ghosn to carry a passport. The Tokyo District Court changed the bail conditions and allowed him to carry one of the French passports in a locked case.

The lawyers retained the three other passports as well as the key to the case, according to the source.

Foreign media reports have said the fugitive traveled on a private plane and entered Lebanon using a French passport.

On Ghosn's escape from Japan, reportedly accomplished by hiding in a musical instrument case that was smuggled aboard an airplane, an immigration authority source said that security checks on luggage for VIP travelers using private jets tend to be loose.

"I am now in Lebanon and will no longer be held hostage by a rigged Japanese justice system," Ghosn said in a statement released by his U.S. representative on Monday.

Ghosn is accused of underreporting his pay for years and misappropriating Nissan Motor funds, charges he denies.

With his departure from Japan, his trial, scheduled to start in April in Tokyo, is now up in the air.