The organizing committee of the Tokyo Olympics and Paralympics said Wednesday that construction is largely on track for the Village Plaza, one of the main facilities of the athletes' village made with wood donated by 63 municipalities across Japan.

In a media tour held Wednesday, organizers revealed the five wood-framed complexes of the Village Plaza, which will function as a social hub for athletes and visitors during this year's Summer Games.

About 40,000 pieces of wood from 63 municipalities from Hokkaido in the north to Kagoshima in the southwest have gone into the floor and columns of the 5,300-square meter facility in Tokyo's Chuo Ward.

Construction began in March last year, and is set for completion in April. 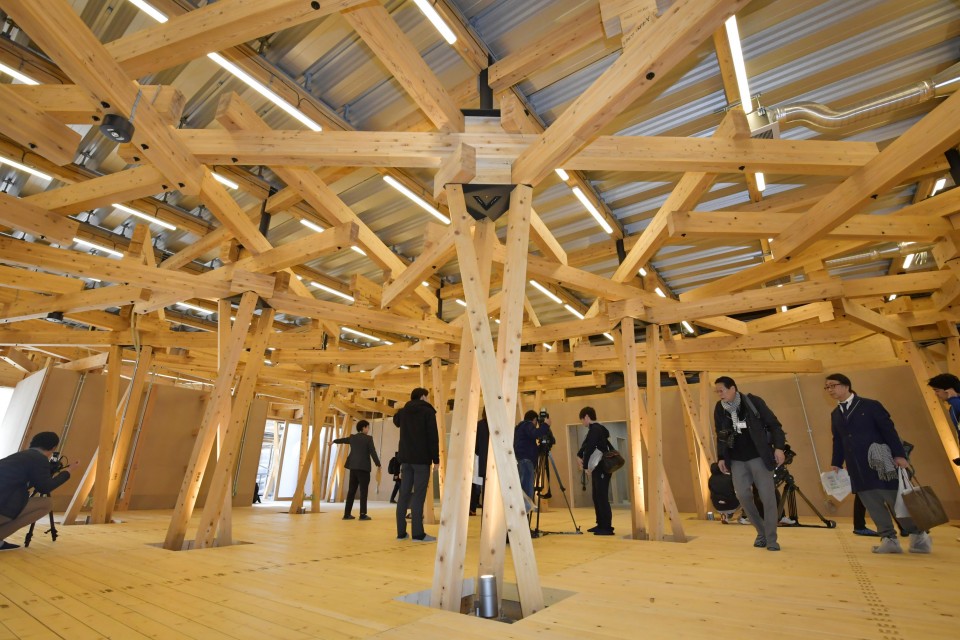 "Using timber allows athletes to relax during the games. We hope they even enjoy the smell of the wood as they spend their time here," said Keita Futami, an official at the organizing committee's Venue Engineering Department.

In addition to cafes and stores selling official Olympic merchandise, the Village Plaza will host a hair salon, a post office and a dry cleaner during the athletes' stay.

It will also host the athletes' welcome ceremonies when they arrive ahead of their respective games.

Each piece of timber has the name of the municipality printed on it, allowing visitors to learn where it came from. As part of the organizing committee's sustainability plan, the timber will be returned to each municipality after the games and will be reused at local facilities in a bid to commemorate the quadrennial events.