A Japanese lawmaker who spearheaded the country's casino resort policy was indicted Tuesday on a bribery charge and served with a fresh arrest warrant for allegedly receiving more money from a Chinese gambling operator.

Tsukasa Akimoto, a former member of Prime Minister Shinzo Abe's ruling party, is suspected of receiving an additional 2 million yen ($18,180) from the Chinese company, 500.com Ltd., as well as having expenses of around 1.5 million yen covered by the company for a trip to its Shenzhen headquarters in 2017, despite knowing it was seeking favorable treatment related to casino business, prosecutors said.

It is the first time in a decade that a Japanese lawmaker has been indicted.

The Tokyo prosecutors believe Akimoto received over 7 million yen. in bribes from 500.com.

The 48-year-old House of Representatives member, who resigned from the Liberal Democratic Party following his arrest on Dec. 25, has denied any wrongdoing, saying he does not remember receiving cash and his secretary dealt with all payments for his trips, according to a defense lawyer. 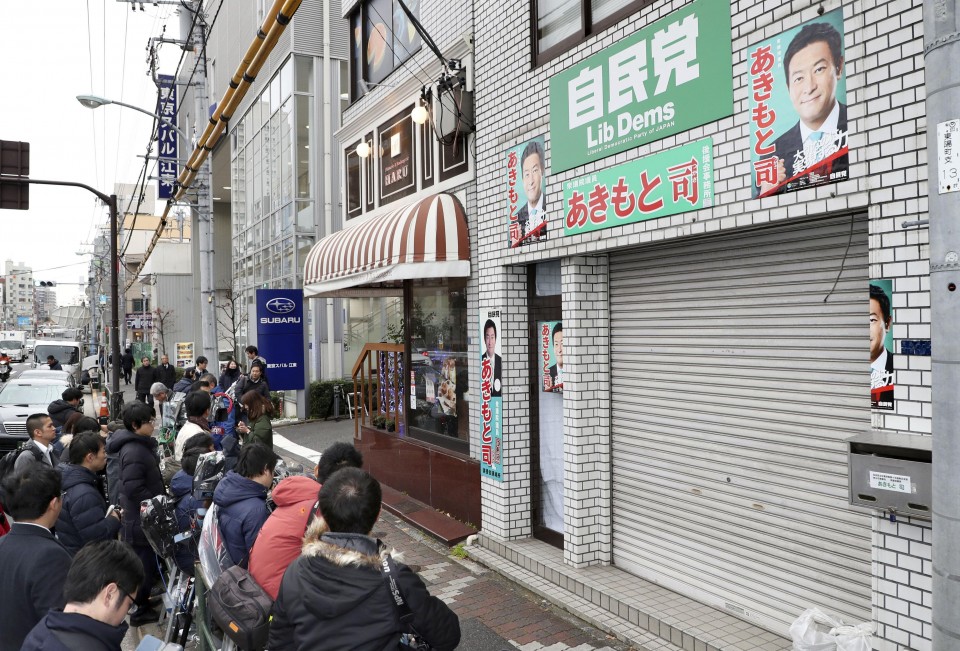 (Reporters gather outside an office of Tsukasa Akimoto, a Liberal Democratic Party lawmaker, in Tokyo's Koto Ward on Dec. 19, 2019.)

Japan recently legalized casinos to be operated at so-called integrated resorts with hotels and conference facilities, in the hope of attracting more foreign tourists and supporting the economy after the Tokyo Olympics and Paralympics later this year.

The Chinese company had been asking Akimoto to increase the number of planned casino resort locations in Japan to five since January 2018, around the time it expressed an interest in becoming involved in a casino project in Hokkaido, according to close sources.

Akimoto was known as a vocal supporter of legalizing casinos and was in charge of overseeing the government policy aimed at introducing the resorts when he served as a senior vice minister at the Cabinet Office for about a year through October 2018.

While declining to comment on the new allegations against Akimoto, Chief Cabinet Secretary Yoshihide Suga said the government will advance preparations for the introduction of the integrated resorts.

On Tuesday, the prosecutors also indicted Akimoto's former secretary Akihiro Toyoshima, 41, in connection with the case.

Three other people -- Zheng Xi, 37, a former executive of the Chinese firm's Japanese unit, and Masahiko Konno, 48, and Katsunori Nakazato, 47, who both served as advisers to the gambling operator -- were also charged with bribery and served with fresh arrest warrants on Tuesday for a separate allegation of bribery.

Zheng and Konno were also charged for bringing 15 million yen in cash into Japan without notifying authorities about it in violation of the foreign exchange law. The law requires people to report when they are bringing in cash worth 1 million yen and over.