The Bank of Japan on Tuesday left its ultraeasy monetary policy unchanged while saying the economy will expand slightly faster than earlier thought on the government's fiscal stimulus, despite inflation rates sticking below the central bank's 2 percent target.

After a two-day policy meeting, BOJ Governor Haruhiko Kuroda said he is confident that the economy will survive the consumption tax hike in October last year as household spending and business investment will recover soon from a temporary fall.

But Kuroda also warned of uncertainty surrounding the world economy, pointing to risks from the continued trade negotiations between the United States and China following their partial deal, as well as geopolitical concerns surrounding the Middle East.

At the meeting, the BOJ Policy Board decided to keep the short-term interest rate at minus 0.1 percent and guide long-term rates around zero percent. It will also continue with its massive asset purchase program.

Releasing an outlook report, the bank upgraded its economic growth forecast for fiscal 2019 through March to 0.8 percent from the 0.6 percent projected in October, following the government's fiscal stimulus package to ease the negative impact from the Oct. 1 consumption tax hike.

Private consumption has dropped since the tax hike. But Kuroda told a press conference that the decline "is temporary as the underlying upward momentum has been maintained." 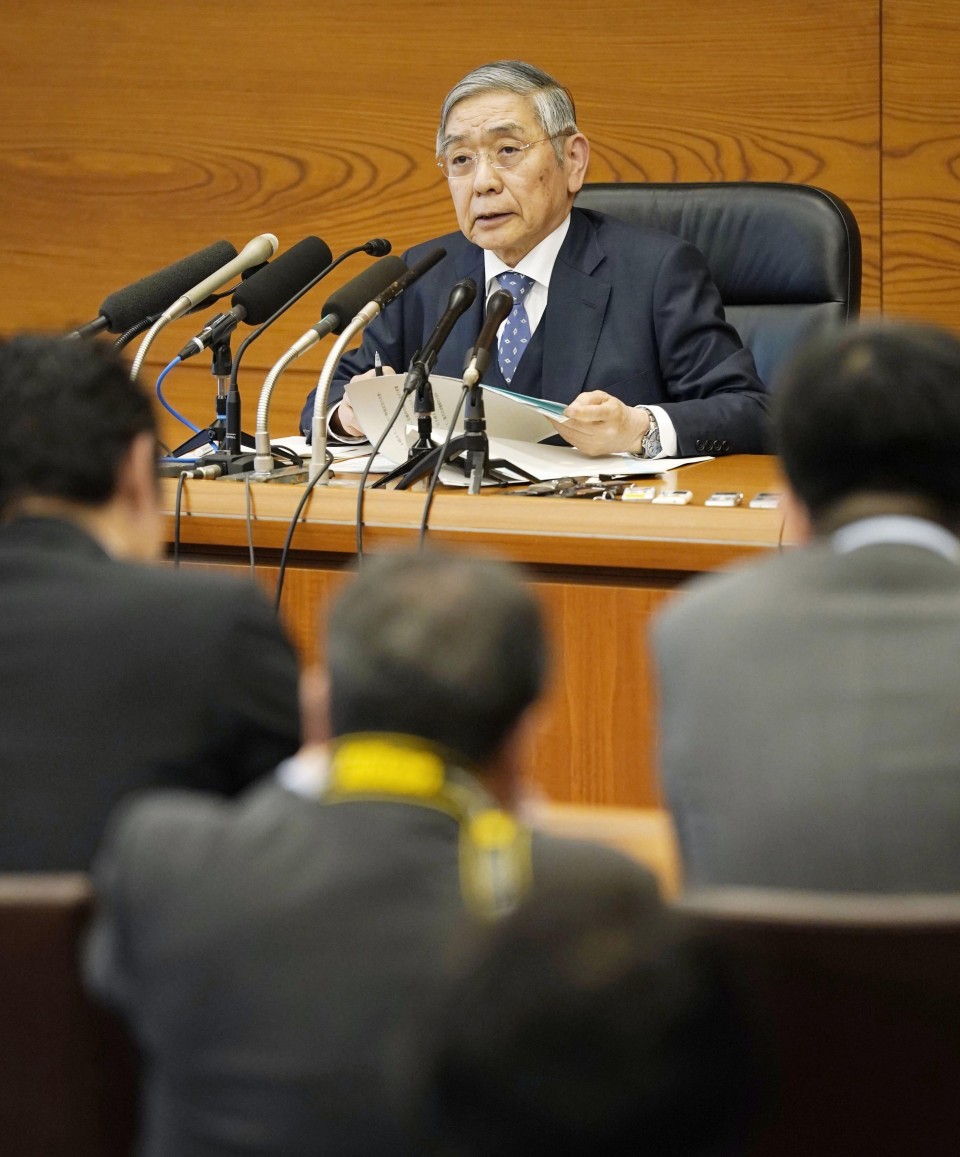 (Bank of Japan Governor Haruhiko Kuroda speaks at a press conference at the central bank's head office in Tokyo on Jan. 21, 2020, following a two-day policy meeting.)

He also denied concerns that Japan's economy could slow after this summer's Tokyo Olympics, saying it is unlikely there will be a sudden, significant drop in construction investment.

In the report, the BOJ maintained its view that "Japan's economy is likely to continue on an expanding trend...through fiscal 2021."

The BOJ also upwardly revised forecasts of rises in real gross domestic product for fiscal 2020 and 2021 to 0.9 percent and 1.1 percent, respectively, from 0.7 percent and 1.0 percent.

The bank held its first policy meeting of the year after the United States and China this month signed the so-called phase-one trade deal, pausing their nearly two-year tariff war and raising hopes for global growth.

But he also said the BOJ remains cautious about developments abroad, citing heightened tensions between the United States and Iran in the Middle East, as well as uncertainty over U.S.-China trade talks for a more comprehensive phase-two deal.

The momentum toward achieving the price target is not yet sufficiently firm but is "maintained," Kuroda said.

Kuroda also reiterated the BOJ will not hesitate to further ease monetary policy if such momentum is lost.

The BOJ Policy Board voted 7 to 2 to keep its current monetary policy, with Goshi Kataoka, one of the two dissenters, demanding a further cut in the short-term negative rate.

The central bank stood pat on solid stock prices in Tokyo, with the benchmark Nikkei hitting Monday a 16-month high amid signs of stable growth in the U.S. economy, one of the biggest destinations for Japanese exports.

The yen has also remained in a comfortable level against the dollar since the U.S. Federal Reserve last year indicated a pause in its rate reduction following three consecutive cuts. A narrower interest rate gap between the United States and Japan could trigger an unwanted surge in the yen.