Creators of paper stencils for kimono dyeing made it possible more than a century ago to mass-produce the traditional Japanese garment with vivid and intricate designs only achieved in older times by hand painting.

The company, which first opened its doors in 1925, is now recognized as a pioneer in manufacturing souvenir color T-shirts. 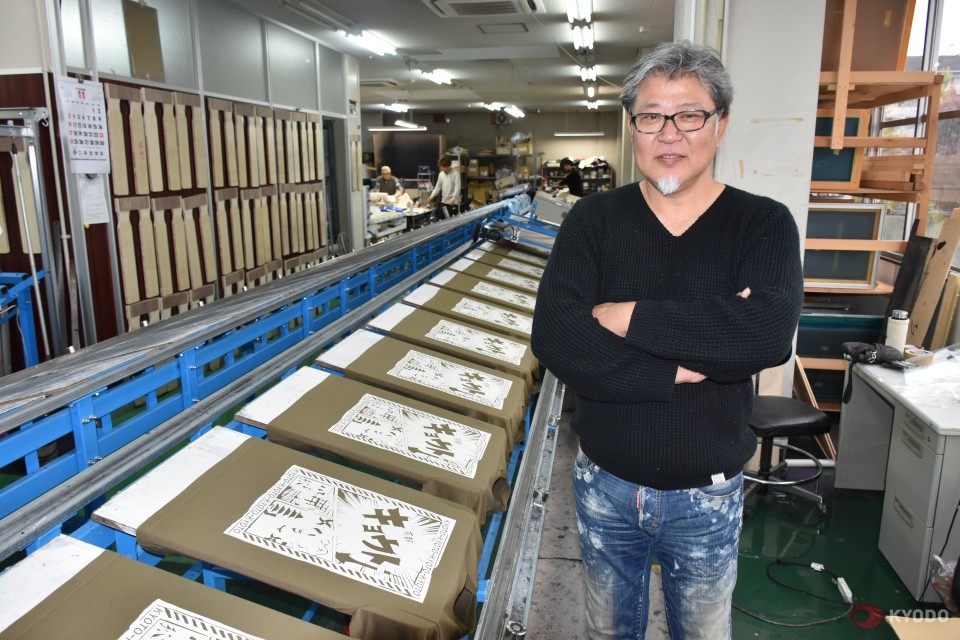 (Michio Fujiki, the 60-year-old third-generation president of Fujiki Yuzenkata Seisakusho, poses with the firm's souvenir t-shirts in Kyoto, on Nov. 22, 2019.)

Its designs have shaken up a conservative tourist T-shirt market in the city where little more than the name of the city in black letters on a white background was offered, primarily targeted at domestic travelers.

It decided to venture into the new business when the Japanese government embarked on attracting foreign tourists to boost the economy and enhance the country's cultural presence abroad.

Kyoto attracted a record 4.59 million foreigners in 2018, up from 3.61 million the previous year, according to the Kyoto prefectural government. Visitors to the city overall spent 1.31 trillion yen in 2018, growing 16.1 percent from the previous year.

Michio Fujiki, the 60-year-old third-generation president of Fujiki Yuzenkata Seisakusho, calls the T-shirts' color and design "wa-pop." "Wa" means "harmony" but is also used as a prefix to mean "Japanese" or "Japanese-style."

Fujiki's company aims to combine Japanese traditional patterns and western pop culture. It started selling the pop T-shirts in May 2018 and now sells around 38,000 of them a year.

One of the designs shows "KYOTO" printed diagonally against three traditional patterns -- a "seigaiha" wave motif, an "egasumi" design of haze and clouds and an "ichimatsu" checkered pattern also used in the 2020 Tokyo Olympic and Paralympic logo. These patterns are typically seen on kimonos.

Fujiki's ancestors used paper stencils after the introduction of synthetic dyes in the Meiji Era (1868-1912) made it possible to create more complex designs and sped up the dyeing process.

"We found stencils that date back to the Edo Period (1603-1868)," said Fujiki, whose company now uses modern printing technologies to make pattern templates. 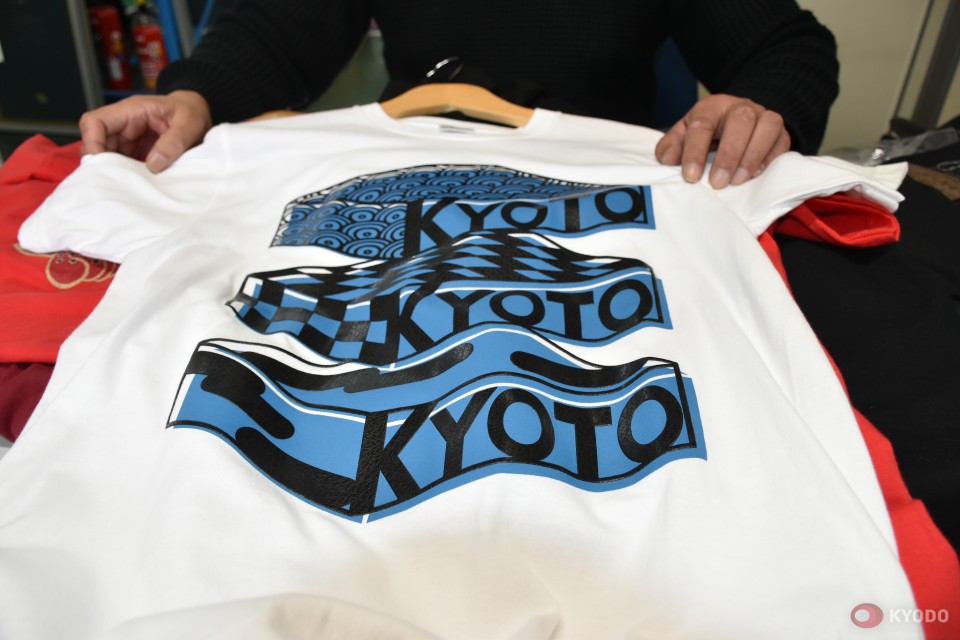 It is said that a painter named Miyazaki Yuzensai established the paper technique, called yuzen-dyeing, in the Edo Period.

When Fujiki first came up with the idea of making pop T-shirts, he went to a souvenir shop near the UNESCO World Heritage-listed Kiyomizu temple, a popular tourist destination, and asked for shelf space for some of his color T-shirts.

Even though the shop's owner told him such T-shirts would be "no good in Kyoto," Fujiki convinced the owner to give them a try.

The store owner called Fujiki the next day and ordered more. Fujiki sells his T-shirts for 2,400 yen ($22) each, more than double the some 1,000 yen price tag for typical souvenir T-shirts. Many other local suppliers soon followed suit.

"Now we see a lot of colorful T-shirts sold in Kyoto," he said.

Like many other businesses in the kimono industry, Fujiki's company has had to diversify as very few people wear kimono on a daily basis today.

His firm's profit from the T-shirt business nearly tripled to 34 million yen in the year to September 2019 from the previous year. The company, which also makes T-shirts for domestic consumers, generates half of its profit in its T-shirt business from its souvenir items. 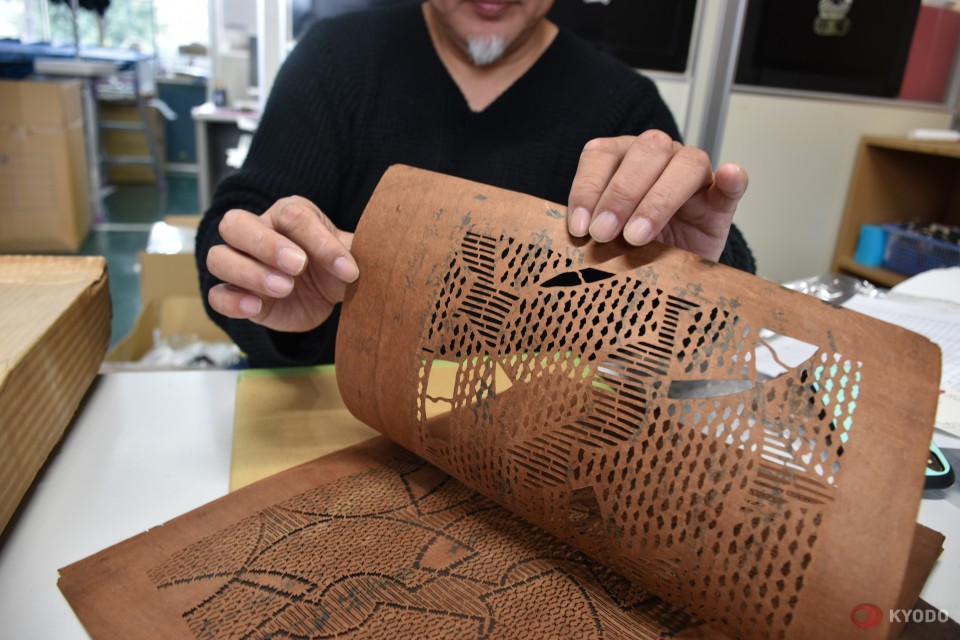 Fujiki, who now sells Osaka and Tokyo T-shirts in those cities, expects profit from T-shirts to further increase to 55 million yen in the current business year.

Fujiki is also allowing young designers to use a studio he established two years ago so that they can create their own designs for T-shirts and other clothing.

He is hoping to work with the Agency of Cultural Affairs to make shirts with well-known paintings such as works of ukiyo-e master Katsushika Hokusai, known for his "Thirty-six Views of Mount Fuji" series.

"I hope to sell my T-shirts in museums and art galleries in Kyoto," Fujiki said. 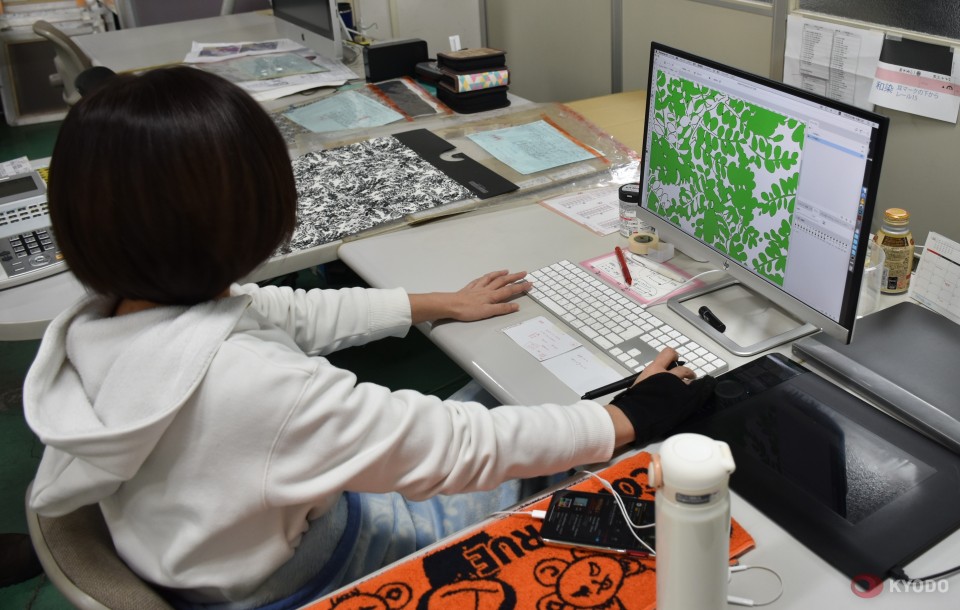 (A woman draws a stencil on a computer at Fujiki Yuzenkata Seisakusho.)